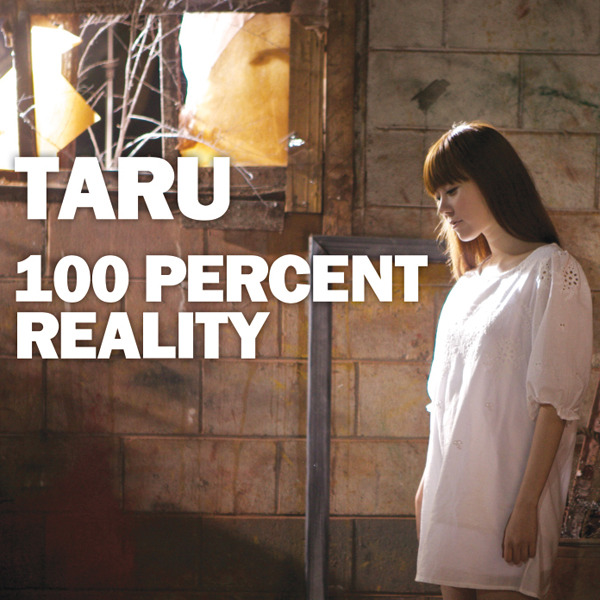 Chances are, even if you don’t know who Taru is, you’ve heard her voice before. Since her 2007 debut as the vocalist of electronic-alternative band The Melody, and subsequent transformation into a solo artist, this singer-songwriter’s lithe, delicate voice has been a draw for listeners and an asset for herself. The once-”Goddess of Hong-dae” (referring to the college town around Hong-Ik University in Seoul, a central scene for Korea’s indie musicians) went on to participate in a huge number of commercial songs, while working closely with other indie big-names like Humming Urban Stereo and fellow Pastel Music artist Sentimental Scenery. (In Sentimental Scenery’s newest album, she is featured in the title track as well as in another that was originally a commercial tune.) Even mainstream-focused listeners have probably heard of Epik High‘s 2008 masterpiece 1분 1초 (1 Minute, 1 Second), where Taru sang the well-known chorus.

But sophomore album 100 Percent Reality throws a lot of Taru’s previous images out the window. This is a thematic and genre-wise departure from Taru’s two previous major releases, EP R.A.I.N.B.O.W and studio LP Taru. Everyone knew Taru was a versatile vocalist, but in general she used to stick to electronic pop and shibuya-influenced electronica, with some ballad streaks thrown in. On the other hand, this album, which was written and composed from beginning to end by Taru herself, is much more heavily pop ballad. The focal point of her music seems to have shifted a bit.

An emphasis on ballads means attention to emotions, and Taru proves to be more than deft in this regard. From the heartbreaking, escalating climax of lead single 여기서 끝내자 (Let’s End It Here) to the steady, soothing mystique of 내 사람 (Mine), the singer covers a very wide spectrum of the genre; her voice audibly adapts and takes on different forms, as moods and instrumentation do the same.지금이 아니면 (If Not Now) is intensely memorable for its gorgeous melody and accompaniment, perhaps the best out of any song released so far this year, as well as the hauntingly evocative lyrics and restrained performance.

Of course, there are also some reminders of the bubbly easy-listening fare from the past. 아이스크림가게, 팬시보이 (Ice Cream Parlor, Fancy Boy) is one such throwback, complete with ear-pleasing atmosphere and an unsuppressed quirk. 이슈 (Issue) is another, and has Taru channeling a little old-school Park Ki-Young in a traditional upbeat alternative track. I’d call 말해줘요 (Tell Me) a third, but this one is a little harder to classify–it marries the obligatory (for a Taru album, that is) social critique track with a ballad soundset of escalating grandeur and scale. (This particular case is reminiscent of Death Cab For Cutie‘s Transatlanticism.) Tell Me actually deserves a lot more scrutiny than I can give it in an album review–it’s a very sophisticated piece of work, where the message is visible but not obvious, impressed upon listeners but not forced. The accompaniments speak volumes as they crescendo and subside; the lyrics are innocent yet poignant and nuanced.

That such tracks emerge is a testament to Taru’s skill as a singer-songwriter. As mentioned, she wrote and composed the entire album by herself (you’ll see the songs credited to a “Kim Min-Young”, which is her real name). While she had some help from fellow Pastel Music labelmates–Epitone Project‘s Cha Se-Jung rearranged Taru’s version of Let’s End It Here to create the featured duet version performed with Zitten‘s Sung Yong-Wook (also from Pastel) and Sentimental Scenery helped arrange Issue–the finished work is fully a product of Taru’s own artistic freedom. Which is how 100 Percent Reality gets its distinguishing characteristics: genuineness and authenticity. This album has very little that feels artificial. No tragic melodies written to force tears, no elements included just to sound cool.

I mentioned the climax to Let’s End It Here earlier. Taru said she wrote the song based on her experiences, and perhaps because of that, there is no forced emotion here. The faint, longing melody is just as visceral as the lyrics are austere. The climax in question, where Taru and Sung repeat a harmony of “잘라내자” (“let’s cut it off”), is the best example: it’s a simple expression, a curt and blunt way to express what’s happening. It’s emphasized again and again, each time more emotional than the last, as the strings and guitar race to a breathless conclusion. There are many such memorable moments throughout 100 Percent Reality; each one is powerful precisely because it’s so real. The album is sometimes a five-minute dramatic epic and sometimes a snapshot of everyday life, but it’s always refreshingly candid.

One thing I found notable: 100 Percent Reality is nominally eleven tracks long, which is sort of on the lower end for a full-fledged studio release, and three of the last four tracks are different arrangements of Let’s End It Here. The “band version” is actually interesting, but the solo version is mostly redundant and the radio edit predictably so. (Not that they shouldn’t be there, but the ordering is a little odd.) But it’s clear that this album is not lacking in effort, lengthy or not.

100 Percent Reality is an achievement, and it’s also a promising sign of things to come. This is likely only one slice of what Taru can show listeners, just like how her first album and the more recent Mr. Destiny were other slices of their own. She’s said before that she does not want to be bound by genre or structure; that’s exactly what happened here. What the future has in store for her motto of “music that comforts” is yet to be seen, but in the meantime, 100 Percent Reality is one of the best albums in recent memory.