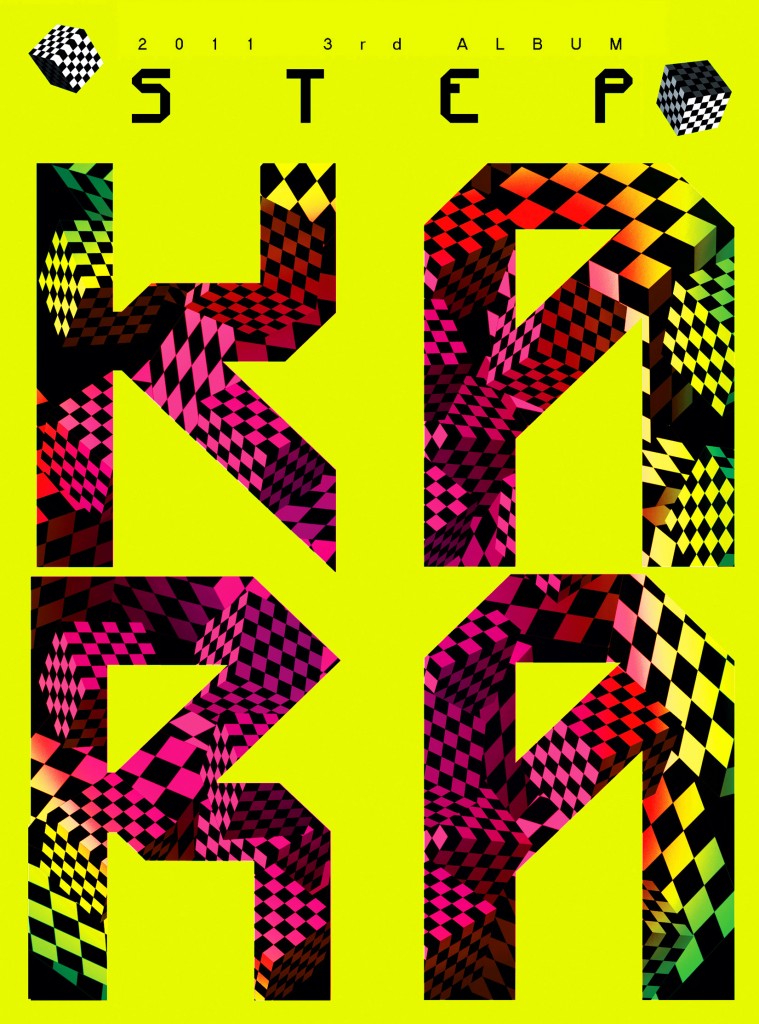 You’d be hard-pressed to name an idol group that has taken a tougher path to prominence than Kara. Nearly two years of obscurity, multiple member changes, and the whole gamut of false rumors, not to mention DSP Media‘s notorious ineptitude at managing its artists over this millennium; if nothing else, the members deserve praise for defeating all of that. Now, as arduous as the past four years have been for Kara, we haven’t really seen a proportionate growth in its musicianship; but that’s not to say there hasn’t been any at all. Growth there has been, and growth we see in Step, Kara’s third studio album.

…Well, half of it is Kara’s growth. The other half belongs to the development of production duo Sweetune‘s skill. Their latest work, the new album’s eponymous lead single Step, is breathtakingly well done. The track mixes a relentlessly aggressive club beat with brass embellishments and flairs of rock. This beat by itself would probably make an above-average dance track, but Sweetune goes on to add an addictive singalong chorus and pump-up lyrics on top of it. Of course, the trifecta wouldn’t be complete without Kara itself. I can’t think of any song  more perfect for Kara than Step, from its message (from the lyrics: “It’s the same for everyone, I won’t be intimidated // Small worries, to them I laugh and say bye bye // I’ll be stronger, go higher”) to atmosphere to vocal arrangement.

It is that last component that impresses the most. Kara isn’t the most vocally talented girl group out there, but here they find ways to sound very, very nice. The first way is, of course, by just being better singers than before; Han Seung-yeon and Park Gyuri, in particular, have improved to the point of being able to handle some pretty demanding parts in Step, and the other members all pull their own. The second is through that aforementioned arrangement. Step is the most singalong-conducive dance track in recent memory – this shows up best in the explosive chorus, which follows an A-B-A-B pattern between collective harmony and powerful outburst. The harmonies – “Step it up, step it up” and “템포를 올려서’ (“Raising the tempo”) – are punctuated but devilishly addictive, while the outbursts and the chorus-ending “baby, my baby” compensate with smooth melodic flow. Oh, and let’s not forget the rarara refrain. Now, there is a legitimate concern that Kara’s lead singles are becoming too similar; comparisons between Step and Jumping are not unfounded. I just don’t think it’s at a worrisome state just yet. But even allowing for all that, the end result here is a technically intriguing, emotionally heady club anthem, the best song produced by Sweetune this year (yes, I think Step is better than F(x)‘s 아이 (Child) – Love and 9Muses‘ Figaro, which were both excellent tracks), by far the best song Kara has ever released, and one of 2011′s best dance tracks. How’s all that for impact?

It’s understandably difficult to follow something like this up, which is why the entire rest of Step (the album) pales by comparison. But the six other tracks (excluding the intro/outro and instrumental tracks) may pale a little too much. A couple more dance tunes give commendable effort: Rider speeds things up a little more and takes some abrasive sandpaper to the synthesizer, while 따라와 (Follow Me) has a bit more retro in its melody and instrumentation. Neither quite cut it, though, missing a truly memorable moment. Strawberry and Date (My Boy), bubblegum-pop counterparts to all the electronic clubtune, are typical happy-go-lucky-love-song diversions with nothing to set them apart. The album’s lowest point comes at the acoustic remix of 나는 …ing (I Am… ing): with the original version’s protective instrumental cover gone, the new track reveals that Kara still has a bit of work to do to stand abreast with the vocal elite among girl groups; the verses are okay, but the chorus is rampant with overly dramatic emotions, unstable notes, and an uncomfortably stubborn focus on volume. Dear Kamilia, a dedication song to Kara’s fan club, is well and good, being neither more nor less than what it’s supposed to be.

And with that, we’ve just covered every real track on Step. A little underwhelming, no? Blame the low track count if you wish, but the fact of the matter is that with the (admittedly significant) exception of the lead single, Step is very bland. But at least within that one brilliant track, Kara shows listeners its potential. So long as DSP keeps Sweetune paired up with this group, we’re certainly going to see above-average results from the combination; you know, that would be Mister, Lupin, Jumping, the whole deal. If Kara is going to break out of the mediocre, though, we need something more extraordinary. More of Step (the song). They’re going to need to keep achieving more of that potential. After all, it’d be a real shame if another four years pass before somebody says “We haven’t really seen a proportionate growth in Kara’s musicianship” all over again. Here’s hoping that verdict gets changed soon.