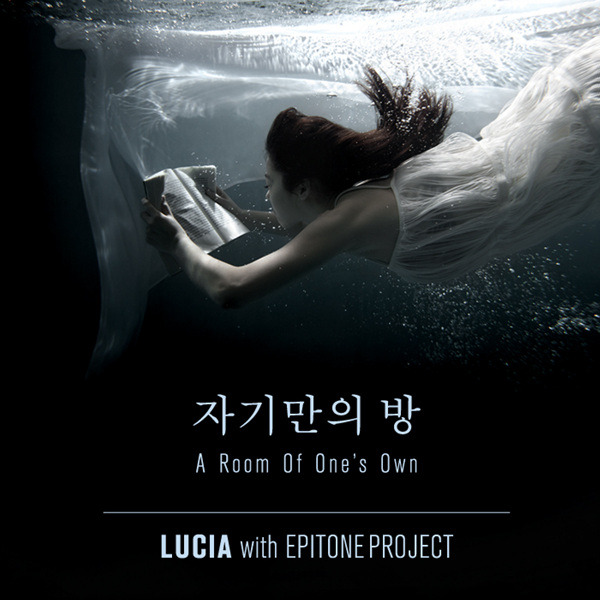 Album Review: Lucia with Epitone Project – A Room of One’s Own

Ever heard of Lucia? No? There’s a good chance you haven’t – until very recently, she was known by her real name Shim Gyu-sun (in fact, Sentimental Scenery‘s recent album Soundscape credited her appearance by that name as well). She’s indie label Pastel Music‘s next big artist, with an already-significant following and solid record of awards to boot – she won a Gold Prize in the prestigious MBC College Music Contest in 2005, for starters. Lucia’s performance in labelmate Epitone Project (Cha Se-jung)’s 2010 album 유실물 보관소 (Lost And Found) and Soundscape impressed a lot of folks, and here she is again, with a new name and again paired up with Epitone Project for a full-length project album.

자기만의 방 (A Room Of One’s Own), title inspired by Virginia Woolf, is a heavily atmospheric ballad album that works almost entirely on a simple formula: melancholy, sometimes jazzy instrumentation led by Cha Se-jung’s delicately nuanced piano performances, plus a sentimental but not melodramatic vocal track by Lucia. It’s the same methodology from Lost And Found‘s reworked version of 오늘 (Today), as well as the one hinted at by 부디 (Please), pre-released as a single from this album in late 2010. At the same time, A Room Of One’s Own does buck the formula at times to accommodate for the kind of easy-listening fare akin to Lost And Found‘s other collaboration 선인장 (Cactus) and this album’s other pre-release 고양이왈츠 (Kitty Waltz).

The fact that A Room Of One’s Own does not grow stale throughout its duration is testament to the formula’s robustness – and the duo’s skill at crafting it that way. The album contains an abundance of diverse but consistently gorgeous melodies and accompaniments, and there’s not a lot of overlap in mood. 꽃처럼 한 철만 사랑해 줄 건가요? (Will You Love Me For One Season, Like A Flower?) is lonely and hazy, drenched in an intoxicating piano line and soft jazz snare; Sue has an initially similar atmosphere that gives way to a powerful chorus that results in more emotional investment. Speedy arpeggio and breathless strings (a little reminiscent of Younha, actually) in 안녕, 안녕 (Hello, Hello) complement Lucia’s wistful poetry, while the aforementioned Please taps into rich analog sensibilities with a boldly flowing melody and simple yet stunningly pretty lyrics.

Amongst all this ear candy, lead single 어떤 날도, 어떤 말도 (Every Day, Every Word) has a hard time standing out. That’s not to say it’s bad; the frequently punctuated melody is uniquely engaging, and Lucia’s restrained, kept-dry performance is terrific. The track’s focal point is the segue between the high-intensity bridge and subdued final chorus, from sustained chord into soft piano, and it’s instantly captivating. (It’s also strikingly similar to the ending of Taru‘s 여기서 끝내자 (Let’s End It Here) from earlier this year; the two sections even share the same note progression, just in different keys. Interestingly enough, Epitone Project actually also handled that track’s arrangement.) However, it is to say that the track doesn’t set itself apart from the album’s other ballads in any meaningful way, and in my mind is eclipsed by the musical and emotional impact of Sue and Please.

Cha and Lucia enrich the album, sounds-wise, with a strong lineup of non-ballads. The best of the bunch, by far, is 버라이어티 (Variety), composed by Lucia instead of Cha (she also composed three other songs on the album – 첫번째, 방 (First, Room), Like A Flower, and Sue. More on this later). Lucia opts for the “more is better” approach, wielding an expansive soundset of brimming brass and festive strings to go along with elegant piano. While this kind of jazz-influenced pop isn’t anything new, this iteration is perhaps the best of its kind I’ve heard all year. The melody is ambitious and irresistibly dreamy,  and some theatrical flairs are audible as well: there’s suspense bubbling subtly in the pre-chorus, and masterfully natural shifts in mood in the chorus. The effortlessness of Lucia’s vocals belie the fact that Variety is perhaps her best performance on the album: she sounds sincere yet transient, bubbly yet nuanced. She manages the lyrics almost playfully, changing moods as naturally as she shifts between shallow and explosive (pre-chorus) and into falsetto.

Kitty Waltz is another lighthearted track, and while it doesn’t approach Variety‘s level of greatness, the austere theme and down-to-earth lyrics help fill a void for the album. 어른이 되는 레시피 (Recipe For Becoming An Adult) is similar, albeit a lot more quirky; the idea is to express certain “rites of passage”, if you will, ranging from drinking coffee to parting with a lover, and express the relevant emotions as a taste. I was reminded of 015B‘s 간장드레싱 레시피 (Soy Dressing Recipe) (2007) – not only because of the title, but also because of a similarly surreal, dense atmosphere and usage of the same muted trumpet texture. 015B may have served as an inspiration, but Recipe For Becoming An Adult is a lot brighter and less enigmatic. Much, much less enigmatic… but I digress.

The album concludes with two complex compositions. 웃음 (Smile) is paradoxically the album’s darkest track, its instrumentation driven solely by somber piano and strings. Lucia is frail and precarious, leaving much unsaid; Cha Se-jung, who makes his only vocal appearance on this track, grounds the balance a little but has the same space-between-the-lines approach. The two’s dynamic is punctuated by stormy viola intermissions through the vacuum; it’s at once passionate and coldly apathetic. On the other hand, 자기만의 방 (A Room Of One’s Own) takes just the passionate part. It’s almost entirely instrumental, save for Lucia’s excellent scat singing (improvisational singing with wordless syllables); over seven minutes of raging jazz, in all its impressive complexity and freeform structure. I’m actually not sold on how this track fits together with the rest of the album, let alone tie the finale together, but as a song in its own right, A Room Of One’s Own is breathtaking.

So, excellence all around. We’ve heard that Shim Gyu-sun was a talented vocalist, but this album is what undeniably proves it. Simply put, without Lucia’s vocals, a lot of these tracks would be just mediocre. Every Day, Every Word, in particular, would see its engaging melody disappear into monotony. On the other hand, no one really had any idea that she’s also a terrific songwriter, so A Room Of One’s Own sort of springs that one on us. Two of her songs, Sue and Variety, are the album’s two best tracks, and it’s astonishing to think that a rookie songwriter (albeit one who’s been doing this for years) composed works that, for all intents and purposes, blow an experienced and acclaimed composer’s songs out of the water. That’s not exactly to say that Epitone Project slacks off here – his detailed, delicate hand still deftly crafts the majority of this album’s sophisticated melodies, and shows an ability to go for big impact in Please.

Toy is no more relevant; neither is 015B, after this year’s terrible EP. Kim Hyun-chul and Lee Sora are dormant. I could go on, but the point is that there’s a definite void in project-group tandems in ballad right now. In their first serious effort, Lucia and Epitone Project show explosive potential. Their brand of pop is technically sound and emotionally moving; their themes are bitterly wistful and irrationally hopeful. Not everyone might appreciate A Room Of One’s Own for its music, but I think the Kpop scene as a whole, not just Pastel, has a reason to cheer for the emergence of such potent synergy. Especially the tour-de-force debut of an immensely talented rookie in Lucia.