How K-pop may have lowered Korean Music Standards

By Community | May 4, 2014
347
SHARES
FacebookTwitter
SubscribeGoogleWhatsappPinterestDiggRedditStumbleuponVkWeiboPocketTumblrMailMeneameOdnoklassniki

It’s 10 PM on Saturday in the bustling city of Seoul, Korea.  As a gentle breeze swept through the capital, nightfall was well underway.  One of the biggest K-pop concerts in years had just arrived at its finale.  As thousands of screaming, cheery fans started their mass exodus from Olympic Park stadium to the nearby subways, I started to follow suit alongside my friends.  While nearly every fan left happy, with smiles and laughter abound, I was torn. While I do support K-pop, I was a bit disappointed at what I just witnessed at the concert.  I soon asked myself, “Has K-pop really distorted our musical tastes for the worse?”

Just hours earlier, one of the largest concerts, the 2011 Girls Generation Tour, took place to the delight of many fans here in Korea.  As one can imagine, the coverage of the concert was insane.  From new stations covering the venue, nearly every Korean music site reporting on it, to even fans as far as France and the US flying in, the nine ladies were the object of everyone’s affection.  It seemed the ladies that popularized the words “Gee”, “Hoot”, “Tell Me Your Wish”, and “Run Run Run” into K-pop lexicon could do no wrong this night.

But was I the only one that saw the evolution of K-pop spiraling downward before my very eyes that night?

Mainstream Korean music, as a whole, has taken a wrong turn in the last couple years.  While K-pop has undeniably put Korea on the map, it has also taken any musical genre not named pop or ballads off the radar.  This, in turn, makes the average K-pop fan blind to Korea’s true musical talents.

The fact is every year Korea pumps out anywhere from 20 to 60 new rookie groups.  Many of them debut on popular music shows, such as Inkigayo or Music Bank. Ranging from pop, rock, folk, hip-hop, and jazz, these new up-and-comers showcase a variety of musical genres on these shows.  Yet, nearly all these same rookie groups go unheard of and are soon quickly forgotten after the debut.  But why are these talented indie groups ignored?

The answer is simple: bubblegum pop is incredibly easy to manufacture.

The big three K-pop entertainment moguls: SM, JYP, and YG, knows that bubblegum pop sells.  The mantra goes: produce a song that has a catchy hook, backed up with beautiful singers, and promote it like no tomorrow and the song will go viral in no time.  In nearly every case, this belief holds true.  Pop is the easiest way for music companies to make profit quickly, gain more exposure for their singers, easily sell to the public, and secure new countries to attract new customers.  Thus, the big three, with their vast resources and networks, oversaturated the K-pop market with nothing but pop.

But the bubblegum pop phenomenon is not limited to the big three.  Nearly every Korean music company – large or small – focuses on mainstream pop in the hopes of creating the next Girls Generation and cashing in big.  As one noted K-pop music insider said, “Most companies purposely produce a handful of idol groups and hope one or two ends up paying off.”

Of course, creating a pop group as popular as the nine after-mentioned ladies, Big Bang, or 2NE1 is quite slim.  Yet, even smaller pop groups are profitable, reinforcing the companies’ belief that pop is the way to go.  The newer generation of pop groups: Z:EA, Infinite, U-Kiss, f(x), Sistar, Girl’s Day, and Rainbow all have strong, rapid followings. 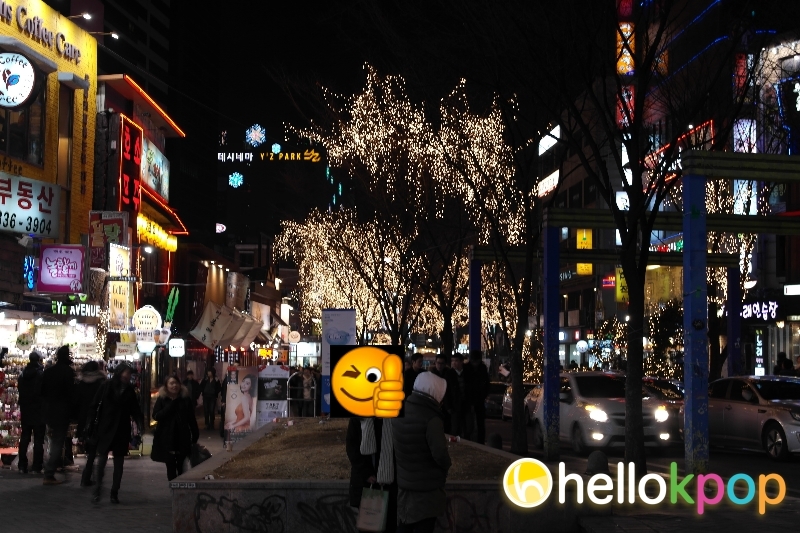 Hongdae is known for its indie scene in Korea. Picture: Adrian at hellokpop

Since the K-pop industry is flooded with the sugary tones of pop, I cannot blame K-pop fans for knowing anything but mainstream.  Especially the foreign fans.  While the native Koreans here in Seoul can explore the indie scene in Hongdae, are able to use the Korean search engine Naver, and read up on the Korean underground scene on Korean websites, foreigners don’t get that same exposure.  Fans living overseas, by contrast, will only see the newest mainstream pop acts on KBS international channels, on Western-based K-pop sites, and Youtube.  It’s no wonder the Korean indie scene is hidden from the public.

For now, it looks like the K-pop train won’t end soon.  An incredible amount of money, numerous concert tours, heavy promotions, and massive advertisements are so focused among the mainstream groups that indie and underground singers get pushed to the side.  Talents such as Indian Palm, Soul Dive, Kebee, Soulman, Barbara, and Ra.D – to name a few – will continue to get confused looks from nearly every K-pop listener.  And that is a shame.

Real Talent or Not?

Another big problem with the popularity of mainstream pop is rating musical talent.  Namely, fans become blind when evaluating the singing talents of their favorite singers or groups.  While fan groups are very important in the growth of K-pop, many of these same zealous supporters are also the main culprits of overrating singers’ abilities, while masking their weaknesses.  This fad isn’t exactly new, as groups religiously defending their favorite groups existed since The Beatles, Elvis, Michael Jackson, and Mariah Carey.  The only difference is those singers could sing and sing well.

However, the same cannot be said for many of the K-pop singers.  The simple truth is: a large majority of K-pop singers are not actually singers, but rather, singers masquerading as entertainers.

What’s the difference, you ask?

While, by definition, every singer is an entertainer, not every entertainer is a singer.  Or at least, a good singer.

An entertainer is someone who wows the crowd through dance, song writing, instruments, acting, singing, stage presence, and good looks.  They are, in a sense, the modern geisha.  A singer is someone that is more specialized, solely depending on their vocal talents to see them through.  Think open-mic night or the new K-pop singing reality shows, where it’s only you and a microphone that determines your success.

The good thing about an entertainer is that they do not have to be good at everything.  In fact, this is to be expected.  Michael Jackson is one example that broke the mold; he was incredibly gifted in every aspect of being an entertainer – that’s why he’s a music icon after all.  As long as the entertainer is good at one or two things, music companies can hide other deficiencies, including weak vocals and bad singing.  And that they did.

Many mainstream K-pop groups today are actually strong at only three things: choreography, stage presence and good looks – via through plastic surgery or being born with them.  Unfortunately, singing isn’t one of them.  By creating slick, well-produced music videos and packaging them with easy-to-do dance moves and singers that just stepped out of Elle Magazine, it’s easy to ignore their singing, or lack thereof.

During the numerous concerts I’ve been to here in Korea, I have seen some K-pop “singers” literally phased out during the solo singing sections because they simply couldn’t hold a note for a couple seconds.  I have also heard out-of-sync singing, weak vocals during the high point of a given song, and an overdependence of auto-tune or the background music itself to carry the song.  I’ve always thought that a good singer should be memorable for their great singing and vocal control, not their catchy hooks or the background music.

Namely, the current evolution of K-pop I was so afraid of and mentioned at the beginning has finally come full circle.  Namely, that bubblegum pop has now set the musical standard of excellence in Korea.  The fact is that music with simple, catchy hooks backed up with beautiful singers is considered the Beethoven of Korean music to the majority of fans.  Actual musical talent and composition be darned.

Calling K-pop singers entertainers is correct.  Yet, calling a majority of them singers is not.  After all, that would be inaccurate, especially when there are singers like Big Mama, Drunken Tiger, and Yoon Mi-rae (Tasha) that actually do use their vocal talents alone and do it well. 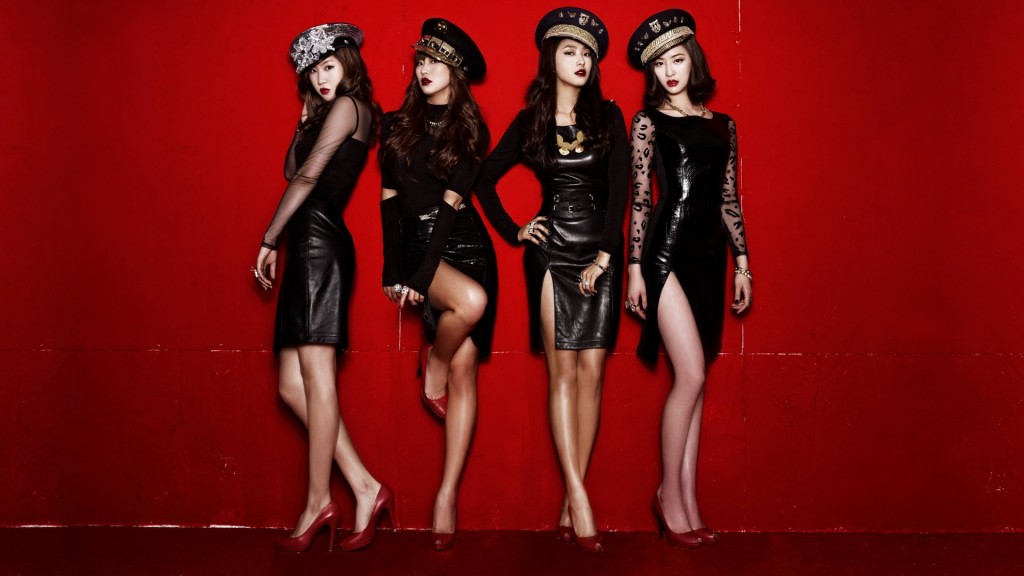 SISTAR’s unique image help them stand out from the crowded K-pop scene. Picture: The One Shots

Attack of the K-pop Clones

Are the pop groups becoming the same?  It sure feels that way. While the new generation of idol groups, such as T-ara, 4Minute, a-Pink, Girl’s Day, and Chocolate, may have different names, it’s not a stretch to say there’s not a lot of difference between them.  From their fashion style, pop singing, song lyrics, and catchy choreography are strikingly similar.  But it’s just not me.

I recently took a poll of nearly 300 people, asking Koreans to identify idol groups’ pictures.  The average Korean did not know many of the groups, only knowing the extremely popular ones, like Girls Generation and Big Bang.  As one surveyor commented, “I really don’t know these girl groups.  What’s the difference between them?”  To tell him the truth, I didn’t any noticeable differences either.  Many groups feel like their carbon copies of one another.

KARA stands out for their Mister butt dance – although these days, they are more popular in Japan.  These groups are the exception.

The new mainstream group that wants to stand out in the end of 2011 next year will need to be unique and have their own spin on pop.  Otherwise, they will be labeled as “just another clone.”

As I rode the subway back home from the Girls Generation concert, I thought, “maybe I shouldn’t go against mainstream K-pop, but work with the fans, the music producers inside the industry to promote Korean music as a whole.”  Korean music has come such a long way since I first discovered SES, FinkL, and HOT back in 1997.  As my subway stop approached and the doors opened, I smiled.  It’s time to show people the other side of K-pop: the indie scene, good singing, and enjoying the Korean music scene with the fans.

For the record, I do enjoy mainstream K-pop.  Like other fans, I like listening to the poppy beats put out by various idol groups every year.  Mainstream groups are undeniably beautiful and handsome, entertaining, and catchy.  It also puts Korea on the world stage.  But there’s still work to be done in developing K-pop.

I have faith in the fans and newcomers of K-pop alike to raise the standards of Korean music.  The US had a golden age of awesome music in the 80s and 90s.  Let’s set a high standard for Korean music in the 2010s, where awesome vocal talents, where any genre can thrive, and where hot guys with 6-packs and girls with nice legs can exist.