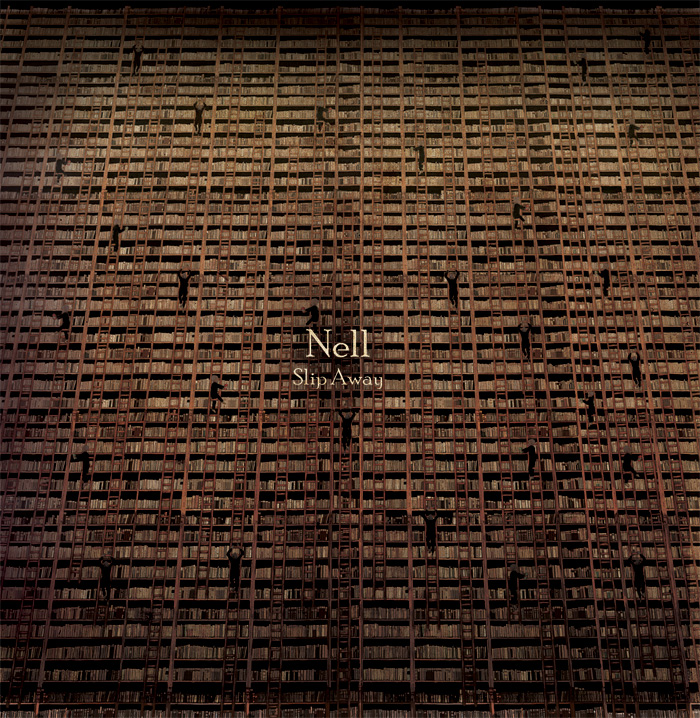 Nell‘s music is often dark, disturbing, hopelessly depressing, sonically bizarre, or all of the above. In other words, inaccessible. On the other hand, their brand of incisive, frank lyricism and emotive melodies resonates with us. It’s why Nell is one of the most popular bands (of any genre) in Korea, and the driving force of their numerous acclaimed works. Slip Away, the band’s fifth (seventh if you include the rare underground albums) studio album and the first since a military-service-spurred hiatus, unfortunately offers us less of both.

Slip Away‘s lyrics aren’t bad. I’m not sure if that would even be possible for this band. Instead, they’re wildly inconsistent. Lead vocal Kim Jong-wan pens the album as always; now, I don’t think there would be much dissent to the statement that he’s simply a masterful lyricist. His writing spans testimony and allegory, mundaneness and fantasia; it tells haunting stories in beautiful prose, explores the darkest depths of the psyche and puts into words what we cannot. There are glimpses of that in Slip Away, to be sure. For example, Go‘s evocative language and the achingly illustrated tragedy of Hopeless Valentine, as well as some choice phrases elsewhere (“The footsteps of time // Couldn’t be ignored as if I hadn’t heard”, in In Days Gone By), show that Mr. Kim hasn’t lost the touch. But other than these and some other exceptions, the lyrics settle for the monotonous – with The Ending, 그리고, 남겨진 것들 (The Day Before; literal translation And, The Remnant), and the majority of In Days Gone By being prime examples.

It’s not to say that the topics are the problem. The vast majority of Nell’s best lyrics dealt with common themes – love, break-up, loss, pain, despair. But Kim Jong-wan always found new things to say about these and new ways to say them, which is how we ended up with the kind of chilling imagery and suicidal despair in 시작의 끝 (Beginning’s End) and 51분전 (51 Minutes Before) as well as the type of hidden irony and gorgeous expressions in Thank You and 마음을 잃다 (Losing The Mind). But Slip Away doesn’t display that creativity. The most disappointing tracks in this regard are the two all-English tracks, Loosing Control [sic] and Beautiful Stranger. I’m not sure what the reasoning behind these was, but they rapidly become clichéd; it seems like Kim boxes himself in when writing in English, sticking to bland language and being a bit more repetitive than he’d like to be. A line in Beautiful Stranger reads “It’s like being locked up in a cage”; in fact, that’s exactly how these tracks read.

The verdict on Slip Away‘s sound is similar – it’s just as inconsistent as the lyrics. The album starts out nicely – the band is in its element with the eerie guitar-string combo and split drum beat of The Ending. A few tracks later, Standing In The Rain presents a gorgeous pop-rock arrangement adorned with punctuating claps and ambient synths. And Beautiful Stranger, even with those lyrics, sounds pretty nice with a deliberate and ponderous electronica beat powering its melancholia.

Even these are somewhat unfocused, however. For The Ending and Beautiful Stranger, the culprit is an overly long outro – clocking in at nearly three minutes for the former and a minute and a half for the latter. Normally, Nell is extremely proficient with this technique; for example, 12 Seconds (2008) had an even longer outro that kept the listener enraptured to the very last second. Listen to the following live version (which has a 4-minute outro, longer than even the studio version).

The trick to this is that 12 Seconds first hits hard with a soul-stirring series of refrains, and then allows the outro to slowly decompress the atmosphere and formulate an ending impression; with the outro serving this specific function, the song does not lose any of its focus. Unfortunately, the two tracks in question do not get this luxury. They’re not powerful, cathartic tracks (they’re not meant to be), and don’t have the same strong impact on the listener. So the long outros have a limit to their viability, and both The Ending and Beautiful Stranger allow theirs to way overstep that limit.

More serious problems arise with the album’s slower and toned-down tracks. Go holds its own, but neither In Days Gone By nor Slip Away (the track) can claim a memorable melody, instrumentation, performance, or atmosphere. Loosing Control suffers from an inexplicably lackluster and unevocative vocal performance from Kim, and the minimalist instrumentation, while good, is insufficient  to cover up the vocal line. Lead single And, The Remnant also falls into this slower-and-unplugged category, although it fares a lot better than the others. It’s a fairly straightforward ballad driven by a tasteful string line; still fairly unremarkable, but it feels the most polished out of the bunch.

This procession of inconsistency and mediocrity leaves the listener thirsty by the album’s tail end. Thankfully, we are quenched – albeit briefly. Cliff Parade is the album’s best track by far and a genuinely powerful work. Kim Jong-wan puts in a minimal but brilliant performance as an inexorable snare beat marches on alongside solemn strings, before the song explodes into an unbridled, torrential riff. It’s tightly structured, massively scaled, and magnificently executed. It’s early, but Cliff Parade is great enough to become an instant frontrunner for best rock song of 2012.

The follow-up, Hopeless Valentine, is no slouch either. Along with the aforementioned lyrics, Nell adds perhaps the album’s most “unpolished” sound – dull guitar riffs, abrasive strings, the irregular polyrhythm scheme – that produce one of its most cohesive tracks. The rhythm is great, but the sense of rush in the song’s chorus and intermission is also breathtaking. It’s the only track here that justifies a six-minute length.

This one-two punch is outstanding, but by this point Slip Away has already made a thoroughly disappointing impression of itself. It’s worth noting that the album does achieve a surprising diversity in instrumentation, as well as some remarkable arrangements – they just get overshadowed by the ineffective composition and lyrics. I can’t help but wonder what would have happened if Nell applied the same edginess and melodic strength of older albums to these improved sound elements. It might have become the band’s greatest masterpiece. On the plus side, Nell does have all the pieces of the puzzle now. It’s just a matter of putting it all together.