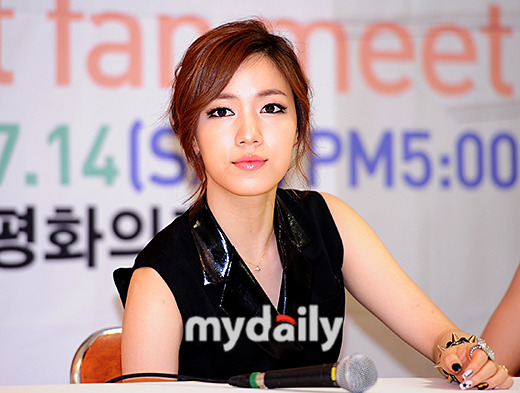 Girl-group T-ara debuted exactly three years ago on the 29th of July, but instead of relishing their successes thus far this year, the group has been involved in a scandal that threatens their  image as a group. On the 30th of July at 1pm (KST), Core Contents Media president Kim Gwang-su announced that member Hwayoung‘s contract had been terminated, and that she would be leaving the group due to her “unacceptable behaviour”. Hwayong’s exit amidst bullying controversies have resulted in a T-ara crisis: the creation of online café T-Jinyo (We Demand the Truth from T-ara), the loss of fans on their fan café, the return of tickets to their concert, and even demands for the group to be disbanded.

T-ara originally consisted of six members: Eunjung, Hyomin, Jiyeon, Boram, Qri and Soyeon. Releasing their debut single Lies on the 29th of July 2009, T-ara has since then grown in popularity and also in size with the addition of Hwayoung in July 2010, and Ahreum and Dani in 2012.

Core Contents Media had recently held an opening ceremony for the official fan-club on the 14th of July 2012 to celebrate the anniversary of T-ara’s debut. However, rumors of bullying and “evidences” to go along have overshadowed the group’s successes, embroiling the T-ara members in their worst controversy yet.

The problem began with posts on Twitter. On the 25th and 26th of July 2012, T-ara staged their concert ‘T-ara Jewelry Box’ in Tokyo’s Budokan Arena. Member Hwayoung had injured her leg a few days prior to the concert, and as she had to wear a cast, she could only participate in the performance of Day By Day in a wheelchair.

After the concert, T-ara members have posted on Twitter comments that seem directed at Hwayoung, raising an outcry over supposed bullying of a member.  On the 25th of July, Hyomin posted: “the difference in wills. Lets hold on to our determination, fighting!” Eunjung then re-tweeted Hyomin’s post and added in her own comment, saying, “one’s position in life is made by oneself.  In the same way, self-determination is forged by the self. Sigh, it is a pity. You have to know how to take care of the people around you”. Also, Jiyeon replied to Hyomin’s post: “The difference in wills. It is a concept. Always modest. I applaud the acting genius.” Soyeon also replied, “the differences in will + etiquette + consideration for others, let’s all stay strong for today as well.”

The posts on Twitter did not seem to contain any other special meanings, but when Hwayoung left a post on her Twitter contradicting her members’ tweets, the attention of netizens were aroused.  On the very same day, Hwayoung wrote, “at times, it is impossible to accomplish some things even with determination. It is upsetting when things like that happen, but I still believe that heaven stands for all that is positive. God, you know everything, right?”

As the word ‘determination’ was mentioned repeatedly by the members, netizens then began to speculate if Hwayoung was being ostracised by her own members. President Kim Gwang-su has since clarified that the tweets about ‘determination’ were references to the concert in Japan and Hwayoung’s injury, but stressed that the members were against Hwayoung’s participation in the concert only because they were worried about her leg and wanted to her to be able to rest and recover.

However, a post in reply by Hwayoung’s older twin sister Hyoyoung from 5dolls implies that Hwayoung has indeed been given the cold shoulder by the other members. She said, “my other half is suffering. My heart aches. Whatever anyone says, Ryu, I believe you can get through this.” Hwayoung then replied, “Only you (believe in me).Ah…” Also, Hyoyoung’s next moving reply – “What can one do with a pretty face? It’s the heart that has to be pretty. Is not a person in pain also human?  I am also in pain. Really want to cry. Let’s just have practice together” – has been regarded by netizens as evidence that Hwayoung has been badly treated.

On the 28th of July, Hwayoung took to her Twitter again to express her thoughts, saying “to me, family and fans have been a priceless [and treasured] backbone. Please keep watch over me.” Although this was not a solid reference to the issue of ostracism, member Boram’s ‘un-following’ of Hwayoung on Twitter on the very same day indicated that there was existing friction in T-ara, as ‘un-following’ someone on Twitter carries the implication of not liking the person and not wanting to be friends anymore, and this action alone functions as a means to end relationships. Arousing the attention of netizens, previously published images of T-ara have since then been posted onto internet communities as supposed evidence of Hwayoung’s ostracism. Speculation has become rife as more “evidences” have been uncovered, and members’ treatment of Hwayoung in the past are now under public scrutiny.

The above photos are various scenes that have been singled out and said to contain subtle indications of the bullying of Hwayoung by the other members. Although it is known that variety shows allow members to showcase their close relationships while playing pranks on each other, some netizens, on hindsight, felt that the jokes made on Hwayoung’s expense had been too extreme in nature. In the above photos, Hyomin is seen poking Hwayoung in the eye by accident while doing a group pose, Eunjung is seen stuffing rice cakes into Hwayoung’s mouth during a game, and Jiyeon makes an “unkind” remark to Hwayoung. Although many regard these photos as signs of bullying, the nature of these entertainment shows requires artistes to jest with each other in order to make programmes more interesting to the viewers, and cannot be taken as proper evidences.

If these and other pieces of evidence (ranging from captures and various testimony to an alleged anonymous online post by Hwayoung in November), this could spell disaster for T-ara, as this would prove that Hwayoung was indeed a victim, and that she had been treated unfairly by the other members because she was an addition to an already established and popular group. However, as reports and “evidences” seem to contradict one another in this T-ara saga, it would be prudence to regard all the members as possible victims before the truth finally comes to light.

On the 30th of July, Core Contents Media had declared that Hwayoung was expelled on the basis of her “unbecoming attitude”, and this was “in consideration of the 19 staff members who had suffered greatly under her mistreatment” – five stylists, seven hair and make-up artists, five on-site managers and 2 team managers. According to a press release, in acknowledgment of their complaints pertaining to Hwayoung, the agency then discussed this issue with the other T-ara members who wanted Hwayoung to stay on, but ultimately decided that the issues with the staff could not be resolved unless Hwayoung left T-ara.

After news of the termination of Hwayoung’s contract was released, Hwayoung expressed her frustration online with her tweet, “facts without truths”. Hyoyoung also posted “………..…” on her Twitter, a vague but likely indication of her own shock. This has again led many to believe that the honest reactions of the twins are retaliations against the “biased” reports made by their agency, and Hwayoung’s sympathetic supporters appear ready to fight against the apparent injustice in the meting out of the “punishment”.

As of 30th July (22:45 hours, KST), it was reported that as many as 6,000 fans had left T-ara’s fan café, an obvious sign of support for Hwayoung and indicating displeasure with the agency and group for dismissing the rumours of bullying by expelling the alleged victim. Furthermore, the online café T-Jinyo has already amassed more than 270,000 members at time of writing, exerting pressure on Core Contents Media and T-ara with their ultimate wish of having the “truth” revealed.  The number of anti- cafés has also risen, with netizens calling for T-ara to be boycotted and for member Eunjung to be kicked out of programmes such as We Got Married, which she is currently filming for, among many other demands.

Although talk of Hwayoung’s possible re-entry into the group has also surfaced, many have deemed it rather difficult as group dynamics have already been altered drastically as a result of the damaging controversies. In recollection of the happy Tweets that members shared last year on their second year anniversary of their debut, this year’s posts have ignited a fire which will leave them burnt and hurt, but which hopefully will also uncover the truths behind the allegations of bullying and clear the name or names of those who have been wrongfully accused.