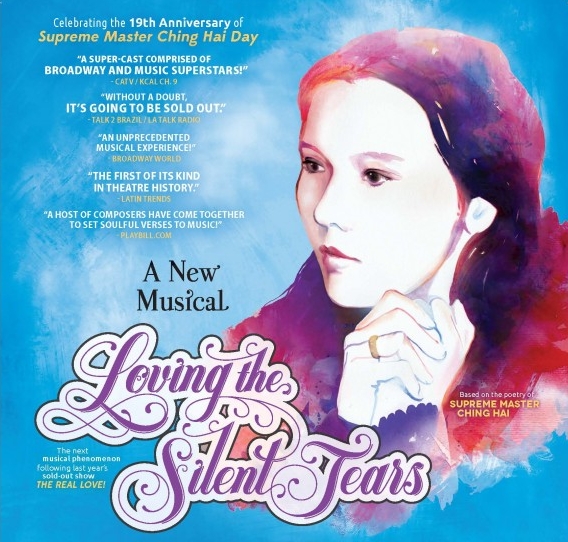 Two Korean American singers, Brian Joo and R&B/soul artist Heather Park, delivered winning performances in the musical Loving the Silent Tears which was presented in front of a sold-out audience of over 6,000 at the Shrine Auditorium in Los Angeles on October 27.

This one-time-only charity performance was about humanity’s search for inner peace and real happiness. Two-time Oscar-winning composer Al Kasha was inspired to create a musical based on poems by Supreme Master Ching Hai, world-renowned spiritual teacher, humanitarian, poet and artist. The show was directed by Tony-nominated Vincent Paterson, known for directing/choreographing Michael Jackson’s Bad and Madonna’s Blond Ambition world tours, and choreographed by Emmy-winning Bonnie Story who created the famous dance scenes in the “High School Musical” movies 1, 2 and 3.

In a statement, Brian said, “I’ve never imagined to be a part of a production of this caliber. Music has always been the main reason for who I am and to be able to perform and share the stage with these many talented artists is like meeting the Supreme Master Ching Hai herself. I am honestly more humbled than ever before, and cannot wait to see where this night will go. Let the journey begin!”

Heather also stated, “It’s an incredible honor to be included among such a diverse, talented, beautiful cast. I’ve been a personal fan of Jon and Jody since I was younger, as well as Black Uhuru.”

“Loving the Silent Tears” told the story of an older, bereaved woman named Joy (played by Patti Cohenour from The Phantom of the Opera) and an ambitious young man named Pete (played by Luke Eberl from Planet of the Apes) who are both struggling in ways that we all could relate to. They go on magical train ride through 16 countries as they also embark on an inner journey toward peace.

“The musical’s message is faith, compassion, gratitude, finding your way out of despair, and finding your inner peace and joy,” explained the legendary Jody Watley.

When the train stopped at a beautiful Korean winter scene, Brian and Heather, in roles that simply represented their culture, performed a moving song titled Singing Praise. Their song stood out as one of the softer and more ethereal songs in the whole show. The music was by Oscar and 2-time Grammy winning composer David Shire, who scored famous Broadway musicals like Baby and for movies like Saturday Night Fever.

One of the highlights of the show were the dancers, an ensemble of more than 30 of the nation’s most excellent talents, who switched dance styles for each of the countries visited. “Loving the Silent Tears” commemorated the 19th Anniversary of Supreme Master Ching Hai Day to honor the worldwide philanthropic work and peace advocacy of Supreme Master Ching Hai. California State Senator Curren Price conveyed commendatory remarks about her longstanding humanitarian contributions. Supreme Master Ching Hai was unable to attend but gave a warm video greeting, in which she said, “To all involved in this musical event, blessed be your dedication to make this world a more enjoyable place, cheering up the masses and giving thanks to Heaven and Earth in this way.”

During the benefit program, in accordance with the meaning of Supreme Master Ching Hai Day, three charitable organizations were recognized on stage with donations totaling US$300,000 from Supreme Master Ching Hai, which she made on behalf of the musical artists. The three organizations were Broadway Cares / Equity Fights AIDS, Animal Defenders International, and Worldwide Veterinary Service. Two California State Assembly Members and the Consul General of Lebanon, who were among the many dignitaries and celebrities attending, presented the checks on stage.

Meanwhile, compassion for all beings was also promoted in alignment with the event’s overall message of peace. The vegetarian guest speaker, Academy Award-winning actor George Chakiris, said during his speech, “Supreme Master Ching Hai’s message is that all beings…have the right to live in peace and dignity on this beautiful planet; and that each person can do his or her part to save lives, better our planet, and be heroes. And my personal way to be a hero and save these important lives is to be a vegetarian.”

Warming up the audience before the show was an amazing feat of entertainment by two Dream World Cirque aerialists portraying angels flying over the audience in the theater.

After the musical received a standing ovation, the event concluded with the full cast singing a finale song, Take Each Other’s Hand, with music by Al Kasha and lyrics based on Supreme Master Ching Hai’s poetry. The audience joined in by waving star-shaped light wands. Al Kasha said, “The show breaks down boundaries. It deals with love and harmony between the nations and the species, including animals. It’s not the typical musical. It’s a musical that deals with hope and happiness, and that’s all I really care about.”

Check out the photos of Brian Joo, Heather Park and the venue below: 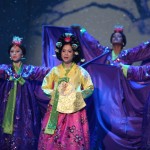 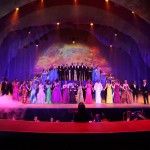 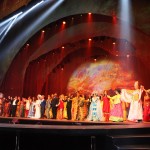 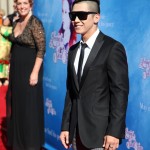 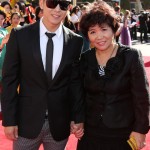 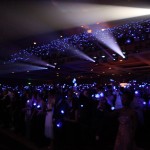 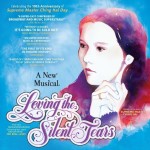 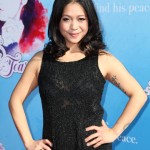 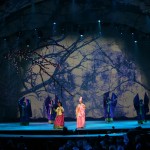 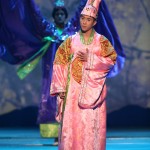