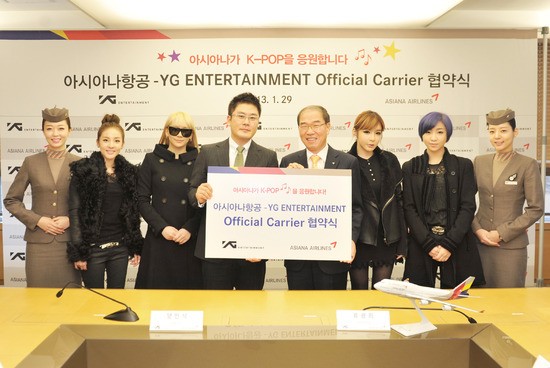 YG Entertainment has signed a business deal with Asiana Airlines yesterday to help the company and it’s artist expand their music globally.

2NE1 joined officials from YG Entertainment and Asiana Airlines yesterday to ink the partnership between the two companies.

As one of two of Korea’s major airlines, Asiana Airlines will be transporting YG artists to and from domestic and international destinations at no cost, or sometimes at ‘discounted plane tickets’.

YG Entertainment will be placing the airline’s logo, who won Business Traveller’s  2012 ‘Best Overall Airline In The World’ throughout their concerts.

An official from Asiana Airlines said, “Through this partnership, Asiana will now be YG’s official sponsor airlines. This will help expand K-Pop as well as our country’s brand.”