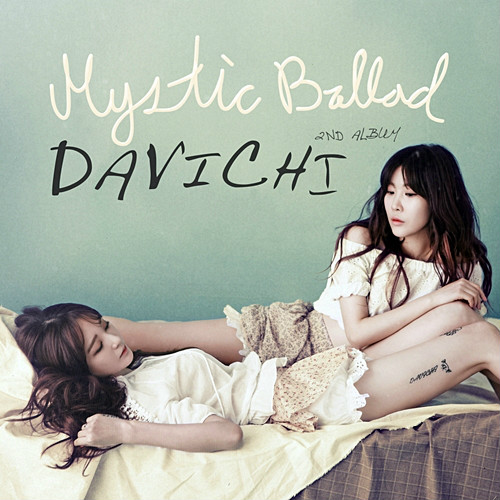 Davichi, one of Korea’s most influential digital artists, has made its official comeback with second full length album Mystic Ballad on March 18.

Like all materials which the talented ballad duo has released, Mystic Ballad went straight to the top of the charts, with its title song topping nearly all charts while other album tracks overflowed on various top 10 lists.

In charts such as Bugs, Davichi now has 6 songs within the top 10, while the title track, Take a Drink Together, is currently hitting Melon‘s roof.

Despite tough competition, Davichi comes back unconcerned, stealing the spotlight while other known chart toppers are being left behind. G.NA among the lot, is one of the artists noted to getting flimsier results based on the chart performance. Less than a week after her release, her latest title track Oops saw a quick fall in all charts, going as far as occasionally disappearing from Cyworld and Mnet‘s top 50. Oops‘ best ranking hasn’t been above ranking 8 as it also fails to enter top 10 of most charts.

Two years ago, G.NA made a name for herself with Black and White, which was an instant chart sensation. She somehow failed to show this prowess again with her two subsequent comebacks but still, those were very decent and music show winners.

Like the saying: the misfortune of one is the fortune of another.

What do you say?

FacebookTwitter
SubscribeGoogleWhatsappPinterestDiggRedditStumbleuponVkWeiboPocketTumblrMailMeneameOdnoklassniki
Related Itemsblack-and-whiteBugsCyworldDavichiG. NAHave a drink togetherMelonmnetmystic balladOops
← Previous Story EvoL returns to the scene with ‘Get Up!’
Next Story → LUNAFLY to release first album ‘Fly To Love’