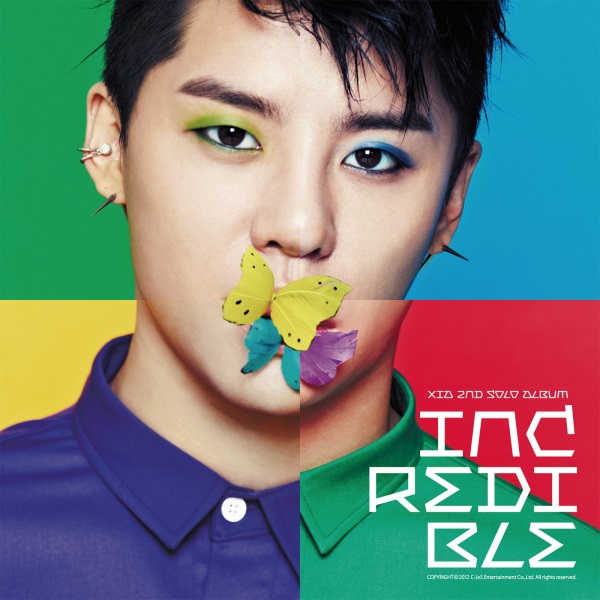 I imagine producing a sophomore album is particularly hard work. The discerning artist must be conscious of what did and didn’t work the first time, and must take care to make it distinct from the first album in some way, while also weighing the risks of straying too far from what wasn’t broken. Or, if you’re Kim Junsu (still going by Xia), you can be bold and just start all over.

That’s an exaggeration, but not a huge one. There are few strands connecting Incredible to last year’s debut album, Tarantallegra. We see an approximate trajectory, where Tarantallegra’s R&B tracks evolve into slow jams here and hip-hop collaborations from before yield further fruits now, and so on; but in most regards, Incredible seems uninfluenced by the JYJ member’s first effort. Whereas Xia tried to showcase his creative juices by producing two-thirds of Tarantallegra himself, this time around he is freer from that burden and only directly involved in composing three tracks and writing four. This turns out to be wise, as the general quality of Incredible’s melodies and structures are greatly improved (no knock on Xia, but he’s not quite a professional composer yet).  Whereas the debut album seemed stuck relying on predictably familiar genres while offering a couple of awkward new looks (admittedly, one of those was the lead single), Incredible is a more obvious fresh coat of paint.

The first half of the album is dazzling. No Reason opens auspiciously, with Xia briefly descending to a surprisingly attractive low range amidst sequenced synths and a dreamy ambience. A pair of emotionally charged tracks bring up the anticipation: R&B number Rainy Eyes contains perhaps Junsu’s best performance in this album, heavy in satisfyingly grating belts and liberal in falsetto glides, while Sorry offers the more traditional climax of a drama soundtrack.

The uptempo section that follows is the album’s most different, freshest, and best. Brass funk track Chocolate Girl takes full advantage of a tasteful arrangement and sly chorus melody; lead single Incredible wears its speedy electronic beat with gusto, Xia punctuating the dissipating synths with a series of cathartic chorus shouts. (Quincy Brown‘s verse is completely unnecessary, but not egregious.) Confessing Right Now is more withdrawn in arrangement, but makes up for it with a pleasant plot and healthy energy. This is new ground for the vocalist, and the fact that he’s able to digest Incredible (the song) without sacrificing his throaty vocal color – in other words, the fact that he makes the song fit him – is impressive.

Up to this point, Incredible is one of the best mainstream releases of the year; unfortunately, the second half is much less consistent. The ballads are again forgettable, and this is in fact Incredible’s biggest problem. The tracks that should be its emotional anchor are not very effective and, instead, fall back on generic dramatic templates with nary a creative spin. I think Xia’s voice isn’t especially suited to a straight minor ballad, but surely he could have found better ones if they were going to be included on the album anyway. 11 A.M. manages to be the lone bright spot with its minimalist arrangement and spotlight on Xia’s tender melodic contours.

Bland club tune Turn It Up and joke track Isn’t This Song Funny feel like diversions. Although the inclusion of these two do signal, respectively, that Xia is still interested in hip-hop and that he knows how to not take himself too seriously, the songs themselves are unremarkable. (Funny got a chuckle or two out of me, but I’m not exactly planning on going back to it.) This second half feels like filler addenda, compared to the polish and occasional brilliance of the first.

For me, that’s an improvement over Tarantallegra – aside from the lead single and a few ballads, well over half of that album didn’t contribute much added value. The fact that Xia isn’t doing almost everything by himself this time lifts up the good parts of Incredible (sometimes in subtle ways – note the fantastic lyrics to Chocolate Girl), but for some reason the same juices are not in play for the whole album. Seeing as how Incredible doesn’t rely on an album-wide narrative or theme, I think it would have worked extremely well as an EP, not unlike Kim Jaejoong‘s I from a few months back.

That being said, don’t let its faults take away from its achievements here; the creativity and polish of Incredible’s better tracks should be taken seriously. Xia has proven a lot at the micro level: he’s a premier vocalist who has shown that he can compose and even arrange individual songs decently. Still, neither of his two albums yet has been a complete effort.

A work that engages from beginning to end, maybe with a permeating theme and direction and a better way to slow down the tempo, is a tall order. People finish out their careers without having one of those. This JYJ member, though, is already halfway there.

Your move, Yoochun. (I’m only half kidding.)