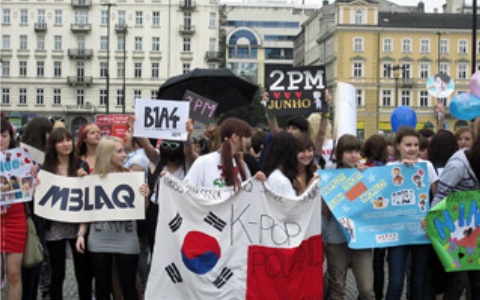 Central European K-pop fans shout, “We are here, too!”

“They probably don’t come here because they think it would be impossible to fill up a stadium. But more likely, if they said ‘Budapest’, half of Europe would flood here”, says Nóri, a high school student, as we are sipping our lemonades in a café in down town Budapest, the capital city of Hungary in the heart of Central Europe. I’m interviewing Hungarian K-pop fans because I’m curious what people think of this genre here. The mood is cheerful but nevertheless woven with an invisible thread of bitterness, as we all think about how K-pop agencies ignore the central region of Europe.

“I have cancelled my TV subscription”, says graphic designer Renáta, when asked if K-pop had an impact on her life. Nóri and her friend, Rebeka, also keep nodding, saying they also stopped watching regular TV or listening to local radios, ever since they discovered K-pop. Nóri even managed to turn her mother into a K-pop enthusiast, they went to SM Town Live in Paris together. The girls also went to Bigbang‘s London show last year, though it was very difficult to get tickets; all were sold within a few minutes.

I was also wondering, why exactly do K-pop agencies believe that if fans from Spain, Italy, Sweden or Germany and other parts of Europe are ready to fly to Paris, London, or more recently Istanbul, for a K-pop show, they wouldn’t do the same if it were to be held somewhere in the Eastern or Central part of the region?

So, I decided it is time to get down and ask Central European K-pop fans how they feel and what they think about K-pop. I am not hiding anything – this is a direct shout-out from Central European fans to K-pop artists: please listen to us, we are also here!

During the summer, I conducted a comprehensive survey among local K-pop fans, and gathered 1691 responses from Hungary, Bulgaria, Czech Republic, Slovakia, Poland, Romania, Slovenia and Bosnia and Herzegovina. 57% of respondents are in their teens (15-19), 28% are between 20-30 years of age. Most of them (56%) discovered the genre on the internet, 33% via friends, and 28% through K-dramas. Although one might think that Psy‘s Gangnam Style-craze would convert a lot of people to K-pop, only 9 people cited him as an initial contact, which is less than half a percent of all respondents.

Singers work really hard to achieve their dreams and more importantly because they express themselves really well through music! – a fan aged 20-30 from Romania

Ever wondered why people like K-pop? Possibly those who are not familiar with the genre, would immediately say ‘because the idols are pretty’. Surprisingly, although looks of K-pop stars might be the starting point of a fan’s interest, it’s not the pretty faces that keep them loyal. As Rebeka explained, “First it is the looks that attract. The music videos are very good, they can dance so well, better than any American artist. The music and the visuals catch you, and then nearly all of them have variety appearances or reality shows, where you fall in love their personalities”. The survey results also correspond to the girls’ feelings, overwhelming majority of people cited reasons other than looks for their love of K-pop, tagging it with attributes like “colourful“, “unique“, “fun“, “positive“, “up-lifting“, “energetic“, where artists can sing, dance, are funny, adorable and lovely.

Gábor, a bright man in his 30s, explained to me that he sees the power of K-pop in its incredibly positive attitude and messages. “Even the most depressing videos have some kind of a positive message in them”. He went on to declare that essentially this is what makes K-pop superior to Western pop music, where – in his opinion – emphasis recently has been put on negative images, songs and videos that deal with dark themes of death and suffering, without offering a ray of hope. According to him, K-pop, despite what Western critics claim, is not all about shallow lyrics and bubblegum music: its messages are a lot deeper than they seems.

To me, the most surprising element in the given responses was that many of these mostly very young fans consider K-pop literally a life-saving experience, helping them to fight depression, which seems to correspond to Gábor’s views on the positive messages of K-pop and its stars. Many also cited the “hard work” idols are willing to do, their passion, the respect they show for each other and the fans, and also, the quality of music. Gábor is also of the opinion that K-pop is good because the music is good: “It builds on two things, I think: contemporary, trendy elements and the disco music (Italo dance and Eurodance) of the 80’s and 90’s. Basically the music of my youth”. He is, however, concerned over the future of K-pop: “Unfortunately, they started turning towards America in terms of music, there is a lot of rap now. It is shaking the foundations of K-pop and will eventually ruin it.” 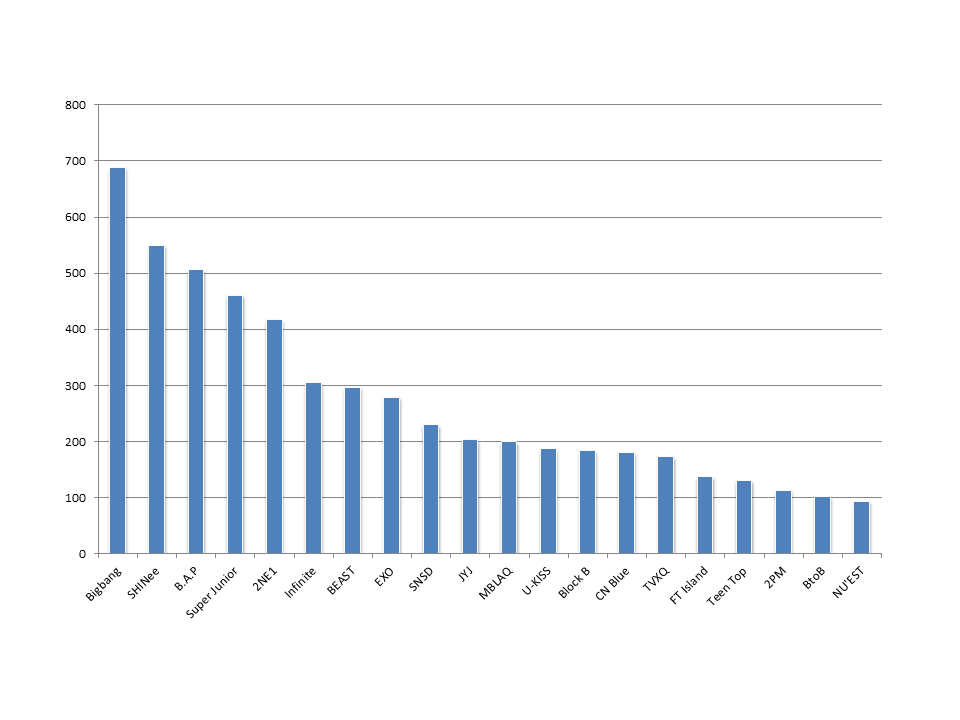 Central European fans chose Bigbang as their favourite artist, with an overwhelming 40% of all votes. Shinee, B.A.P, and Super Junior follow them, with 2NE1 being the only female band in the top 5. The latter half of the top 10 are: Infinte, BEAST, EXO, Girls’ Generation and JYJ, clearly indicating that the mostly female fanbase (96% ) prefers male bands.* As for individual artists, G-Dragon topped the male list, and Lee Hi finished first among the ladies, both gathering less than 5% of the total votes. Surprisingly, popular solo artists like Rain or BoA only received less than 3% of votes.

Bigbang, on stage in London

It would be great if there were fan meets in Europe, too.

73% of fans who filled in my survey regularly read news and gossips about their favourite artists, 88% also follow them through official social media platforms like Facebook or Twitter and the majority would also register at official fan clubs, were they given the chance. Currently official fan clubs only accept Korean (and separately, Japanese) passport holders or migrants with residence permits. Rebeka and Nóri, the two high schoolers I interviewed, also complained that it is difficult for Central European fans to purchase albums and merchandise. “In Paris and London, some music shops sell K-pop. Not a lot, only the most famous ones, like Bigbang, 2NE1 or 2PM, but still. It would be good to be able to buy the albums here as well. Ordering [from abroad] takes a long time.” By the time the package arrives, their favourites release a new mini album. 74% of respondents buy albums and merchandise.

“For a G-Dragon concert, I would fly anywhere in Europe”

Renáta says she would do anything to be able to see G-Dragon live, and she is not alone. An overwhelming 97% of all respondents said they would be willing to purchase tickets for a K-pop concert held in Central Europe.

During our interview, Renáta called K-pop an “underground mainstream” genre in Europe, and I believe she is right. K-pop, though not present in the mainstream media, has the ability to move enormous crowds across this continent – and Central European fans still dream that one day K-pop agencies will realize the potential of their region as well. Until then, here are a few inspiring quotes from these fans, about K-pop**:

…the singers are with great personalities! Not only their voices are like an angel. – Fan aged 20-30, Bulgaria

I love the choreographies, the way they dance, the rhytm of their music. – Fan aged 20-30, Romania

…even if they look perfect, they are still humans, I like a lot Korean variety shows, where they aren’t afraid to get crazy and do all those funny things, that American celebrities would NEVER do (…). I appreciate all the hardwork behind their fame, I love those powerful performances, dancing and singing together. – Fan aged 20-30, Slovakia

Sincerely I don’t even remember what I would do all day before entering this magic world. – Fan aged 15-19, Romania

My life has changed. They give me a sense of individuality and self-confidence.  – Fan aged 20-30, Slovakia

I discovered a new world, and now I think Asian people are beautiful, too. I hadn’t known anything about Asia before. – Fan aged 41-50, Hungary

I’m much more tolerant and more curious about the world. – Fan aged 31-40, Bulgaria

* When collecting votes, individual members of bands were counted towards the final vote of their respective bands, unless the members had notable solo activites (own releases). Listing all members of a band as favourites were added as 1 vote for the band. Entries where K-pop names could not be clearly identified (namesakes, “I love everyone” kind of votes, actors who don’t sing) were disregarded. Percentages were determined based on qualified total votes.

** Quotes were edited for spelling only, please note that they are from non-native speakers of English. Quotes from Hungarian fans are translated by the author.

Sources: K-pop survey conducted between May 1st and July 30th, 2013. Interview conducted on April 28 and May 5 with four K-pop fans in Budapest, Hungary. Recorded and published with consent from interviewees.