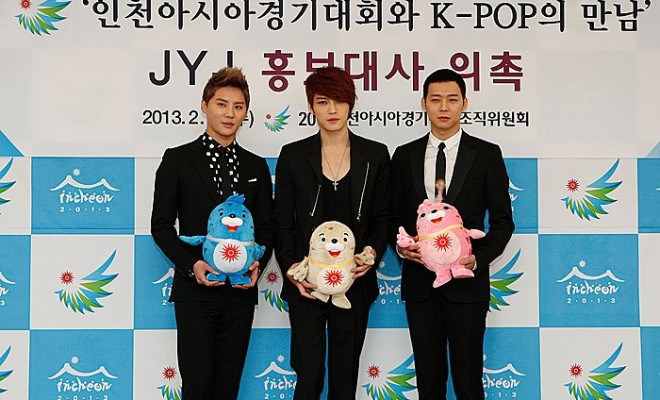 JYJ, who have been acting as honorary ambassadors for the upcoming Incheon Asian Games (IAG), are said to have been dropped from the official list of performers for the opening and closing ceremonies.

After news broke out that JYJ would be performing on the same stage with EXO, it was also revealed that JYJ had not attended the official press conference of the games on 1 July, to which C-JeS Entertainment released a statement saying the IAG committee failed to notify them of exact schedules.

At the press conference, the list of performers were revealed, which did not include the official ambassadors, JYJ. The committee said they were still in the middle of discussion with regards to JYJ’s appearance, as, according to them, their schedules overlapped with Kim Junsu’s planned special musical stage – of which C-Jes Entertainment has no knowledge.

Fans of the band are in an uproar, demanding fair treatment for JYJ at the official Facebook page of IAG, fearing that the incident regarding the Jeju New 7 Wonders, where the band was dropped from the KBS special concert, might be repeated again.

After Kim Junsu, Park Yoochun and Kim Jaejoong parted ways with DBSK (now TVXQ!), the trio had gone through a lot, including unfair treatment from event organizers and music shows on the major television channels in Korea.

Despite having settled the legal disputes with their former agency, S.M. Entertainment, the band has constantly been “neglected” by television producers of entertainment programs, and several incidents happened, where JYJ were denied stage appearance in the last minute.

Follow the story on hellokpop:
JYJ not notified about the Incheon Asian Games press conference
JYJ and EXO to perform on the same stage