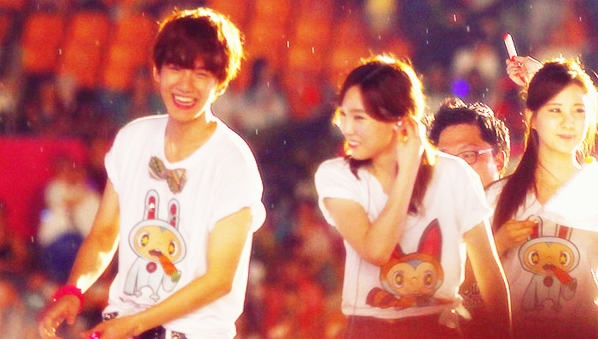 Sometimes fans tend to forget that idols are humans too. They deserve to love and date just like everyone else. With the recent breaking news of EXO’s Baekhyun and SNSD’s Taeyeon dating, it seems like the world of K-pop is changing for the better.

MBLAQ’s Lee Joon shared that idols go around dating each other like animals in the animal kingdom. Fellow member G.O also agreed on Radio Star, “I agree about the comment on the animal kingdom. When I watch the music programs, there are peers who are doing moves that are not part of their choreography. That is definitely a mission for their lover.”

Idols usually do not admit they are dating unless solid proof that their relationships exists cannot be denied.

With relationships often ending before the news even gets out to the public, most entertainment companies are reluctant to tell the truth, and tend to either deny dating rumors (often even with solid proof right in front of them) or play the “no comment” card until enough time passes to swallow the rumors.

Block B’s U-Kwon is an exception to the rule. He personally revealed on BBC’s official fan café that he was dating model Jun Sun Hye, breaking the chain of paparazzi that usually puts famous couples on the spot.

The most used break-up excuse is that both sides have busy schedules and they have drifted apart with time.

Neither the company nor their idols are ever open and honest about the real reasons they break up with their signficant others, but honestly, fans do not care much about the reason.  They only care about whether or not the couple is still on-going or not.

Why is it that the girl usually takes the burden of blame in a relationship?

Back when SHINee’s Jonghyun and actress Shin Se Kyung revealed that they were, indeed, a couple, Se Khyung was forced to shut down her homepage due to the massive amounts of hateful comments from SHINee fans. Another similar incident occurred when a scandalous picture of IU and Super Junior’s Eunhyuk was accidentally posted on IU’s Twitter. IU was stripped from her title as “National Little Sister” almost instantly, despite the fact that the relationship was denied.

Besides leaving hateful comments on SNS, some fans take it a step further by physically harming the idols’ girlfriends.

In late 2013, INFINITE’s L and Kim Do Yeon belatedly confessed to be a couple after their breakup. Several of L’s fan pages decided to take a break with the release of his dating rumors. Do Yeon revealed that fans would throw rocks at her, scratch up her car, and even attempted to disrupt the sales of her shopping mall by bulk buying and then returning everything they had purchased.

She expressed her frustration that, “Although we can be criticized for dating so freely and not recognizing the characteristic of the other person’s career, I do not think that I have done wrong to the point that I’m cursed at and threatened to be killed, and all my information is revealed on the internet, and even end up causing harm to someone else, just because they have the same name as me on their graduation photo.”

Taking into consideration that fans would overreact, idols are afraid to reveal their love lives.

But why the sudden change?

The increase of confirmed relationships over recent years leads to one question: Are idols now more open about dating?

With an increasing number of celebrity couples, it seems like fans are starting to accept the truth that their idols are humans, and more and more fans are beginning to want their biases to be happy.

Take the Baekhyun and Taeyeon couple, for example.  While many fans expressed their disappointment over the relationship, others showed their support by leaving positive messages on Taeyeon’s SNS accounts. Even with 4 out of 9 SNSD members dating, SNSD is not losing their popularity globally.

Most fans have come to realize that their beloved idols cannot stay single forever and may actually get married one day. Let’s be honest, the chance of fans getting married to their idols is one in a million. Sorry to burst your bubble, but it’s just not likely -especially for international fans.

So, if you cannot be “that” person, then you might as well wish your biases a happy life by letting them be with that one person that will bring a smile to their faces.

Besides, all the talk about a couple will be forgotten when the next couple is put out into the spotlight. Entertainment agencies have realized this fact and have become less hesitant to confirm relationship rumors.  While the hateful comments from obsessive fans may not totally go away, the increase of positive comments from supportive fans will keep the train going.