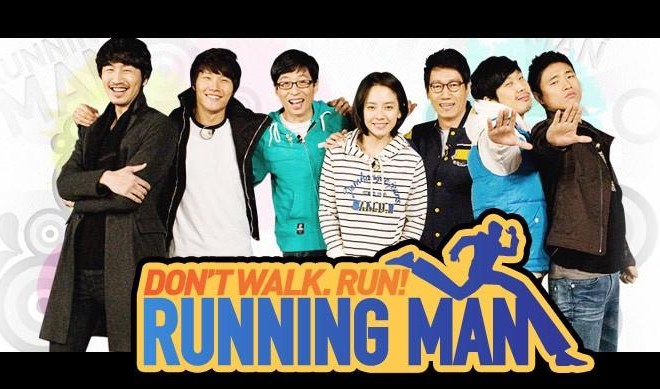 The Factors of Success for a Kpop Reality/Variety Show

Admit it: we’ve all seen at least a few snippets of a Korean reality show with idol guests, whether it be Nichkhun and Victoria cooking together on an episode of We Got Married (or even better, actor Lee Jang Woo‘s futile attempts to operate a washing machine), or Minho and Siwon getting uber competitive trying to make math equations on an episode of Running Man, or the members of INFINITE cleaning up dog poop or… here’s where it gets good, MBLAQ running around trying to “kidnap” kids into a white tent for their newest show.

So what is it that makes reality and variety shows starring K-Pop idols so much fun to watch? I took some time to sit down and evaluate a few of my favorite Korean variety and reality shows to see which factors truly create the perfect show.

Today, with aegyo taking center stage for many idols’ images, reality shows such as Birth of a Family are also becoming increasingly popular as well. I watched the first few episodes (mostly for INFINITE–I admit it, I’m a total fangirl) and found myself absorbed by… (oh, I’m almost embarrassed to admit this) watching seven boys take care of three puppies. It took me until episode four to finally come to my senses and realize that instead of doing AP US History homework like I should have been, I had just watched L go shopping for dog toys for ten minutes straight.

Birth of a Family is actually supposed to be encouraging viewers to adopt pets from animal shelters in Seoul, something that is great and positive.  But let’s face it:  most of the viewers are just teenage girls and boys wanting to see more footage of their beloved idols. So what makes this show appealing? Firstly, the cuteness is almost overwhelming–in episode eight or nine of the show, Sunggyu, the leader of INFINITE, was left alone in the apartment with his three temporary pet dogs. As he took one of them out on a walk, he bought a cup of coffee and placed his dog in one of those little rocket ship rides next to a convenience store (international readers, think of those areas in strip malls where you see little kids getting rocket ship rides for a quarter). I actually laughed out loud as he placed a coin in the slot and stood there drinking coffee as the confused puppy got a rocket ship ride for thirty seconds. Admittedly, it was cute (albeit staged). 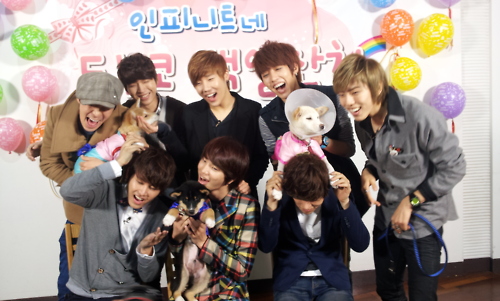 Birth of a Family. Source: infiniteupdates.wordpress.com

The whole show itself reeks of cuteness, complete with speech bubbles for the puppies and sound effects for the idols. It makes for a nice guilty pleasure.  When I’m feeling down, curling up on the sofa with an hour or so of fluffy cuteness from one of my favorite idol groups definitely cheers me up.

Okay, puppies… I’m down with that. So let’s up the stakes a little! Let’s bring in REAL KIDS (I wonder who came up with that idea). The picture above of the three adorable (and not quite Korean) kids with MBLAQ is from Hello Baby. Yes, it’s exactly what it sounds like.  Basically, an idol group gets access to one (or more) kid(s) for roughly one day a week for filming purposes for a few months. SNSD‘s done it, SHINee‘s done it, T-ara‘s done it, even the omnipresent Leeteuk from Super Junior and SISTAR… so why not throw MBLAQ into the mix as well? Apparently, they need more aegyo.

Although I’m not a die-hard fan of MBLAQ, I am well aware of the fact that they are known as one of the more playful K-Pop groups out there (thanks to Lee Joon and Mir–hey, anyone else notice that they’re not touching the kids in the picture above?). So that fact alone piqued my interest and I actually sat down to watch the first episode of their season a few days ago. Long story short, the boys went to a multicultural museum in Seoul in preparation of meeting their multicultural “babies” (while Mir donned a Dutch-milk-maid-esque dress, don’t ask) and then eventually headed off to an outdoors snow park filled with Korean kids to track down the three new additions to their MBLAQ family with the help of vague pictures of the kids’ facial features. 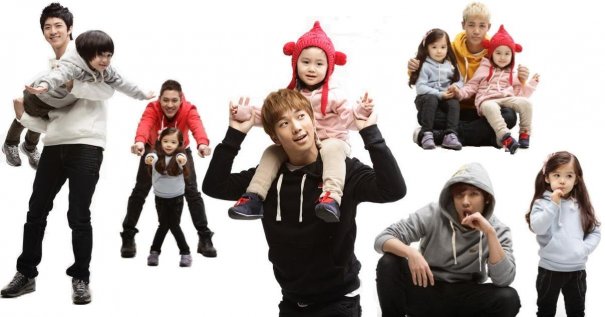 I thoroughly enjoyed the weirdness of the show–from Mir’s pedophile-ish comment about Lauren, one of the little girls they will be taking care of, to G.O and Seungho getting all competitive about who was going to find the kids first. And honestly, although I’m not the biggest fan of Hello Baby, I have to admit that it is a genius idea. Fangirls already think about their favorite idols as oppas, so why not show them how great of a father they can be as well? Same goes for fanboys.  Seeing their favorite female idols’ motherly side come out ultimately leads to fandom.

To break it down simply, puppies and babies lead to unbelievable amounts of aegyo, which leads to more fans, which leads to more money for entertainment companies and more popularity for the idol group at hand. The aegyo formula is failproof in Korean reality shows, for now anyways.

2. The Fanservice Factor (AKA Fake Romance) 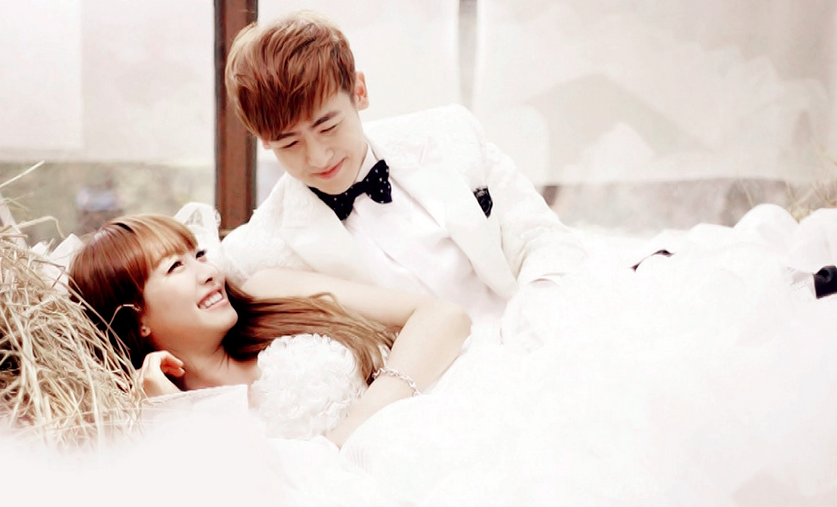 If you are not familiar with the couple shown above, that is the Khuntoria couple (Nichkhun from 2PM and Victoria from f(x)) from We Got Married. For those who are not familiar with the format of We Got Married, the show basically creates fake-married couples from a pool of idols and films them doing couple-y things, such as clean the pretend house, eat out at restaurants, and even go on vacations, every week. It’s like heaven for fans who enjoy seeing their favorite idols go on dates and do adorable things… and hell for the possessive, crazy ones.

The show is not scripted, although it is heavily edited. As for me, I’ve only watched one WGM couple religiously. Khuntoria was too touchy for my taste, the current TeukSo couple (Leeteuk and actress Kang Sora) weirds me out (probably because of the age different), and although I loved the Adam couple (Jokwon from 2AM and Ga-In from Brown Eyed Girls), I never finished their episodes. I settled for YongSeo (Yonghwa from CNBlue and Seohyun from SNSD) and although they weren’t as blatantly entertaining as the other couples, I thought that the awkwardness from that couple was part of their charm. A few of my friends disagree vehemently on this, but in all honesty, the awkward moments from WGM are the best part.

Although WGM is undeniably entertaining to watch, it provides for hordes of overexcited fans with delusions that their favorite couple (be it Goguma or Brave or Woojung) are actually involved in a real relationship. An obsessive fan recently got rebuked by JYP Entertainment for repeatedly flooding Nichkhun’s Twitter with tweets about his “relationship” with Victoria. And if you are not familiar with the various fanfiction communities that exist across the Internet, there are thousands and thousands of stories out there about the love of WGM couples.

The success of WGM comes from the carefully orchestrated romance force-fed to an eager audience. If you are not a delusional human being and have no qualms about watching a “relationship” unfold onscreen between idols with some hilarious and awkward moments, I highly recommend you check out this show and let us know what you think!

After finishing the super popular 2010 drama, Sungkyunkwan Scandal, I discovered that one of the actors, Song Joong Ki (the moose featured in the picture above), was also featured as a regular on Running Man! At the time, I had no idea what Running Man was and so I did what any other curious K-Pop fan would do–look it up and watch it. Today, Running Man (minus Song Joong-ki, much to my disappointment) is one of my favorite Korean variety shows. 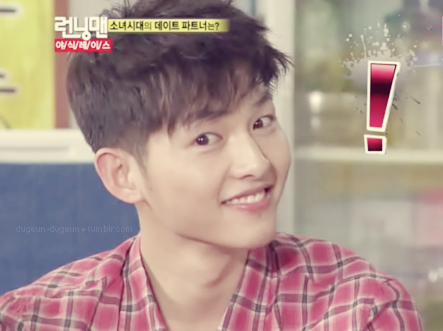 The basic idea of Running Man is “urban action.” The seven current Running Man regulars (Yu Jae-suk, Gary from Leessang, Ji Suk-jin, Kim Jong-kook, Ha-ha, Lee Kwang-su, and Song Ji-hyo) compete individually and in teams with idol guests to complete various missions. The filming locations of the show have largely been places in Seoul or around Seoul, except for a few special episodes. Running Man is fun to watch because the missions are typically very creative and funny, especially when it involves an idol. Examples of guest missions have included DBSK dressing up as Phantoms of the Opera and hiding in the Seoul Arts Center from the Running Man cast, SNSD going on timed picnics with the cast, and even IU hunting down the best local foods in Daegu in order to achieve victory.

Watching how idols react when placed in unexpected situations is entertaining and you learn new things about them as well.  So far, I’ve learned that Yonghwa is quite the hide-and-seek player, Nichkhun and Taecyeon are quite competitive when placed together on a team, and that Yunho sucks at drawing pictures of the rhinoceros. 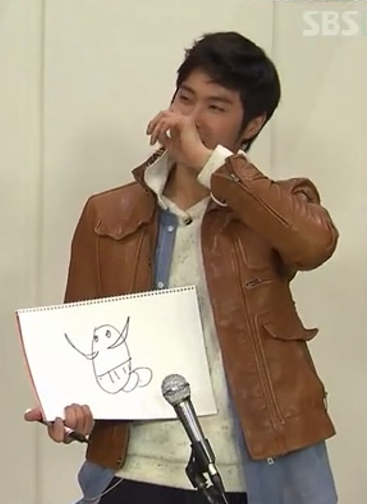 Talk about one awkward-looking rhino.

I think that’s where the appeal of these shows come in.  Having the chance to see an idol behave offstage and in a different situation is intriguing. Sometimes their images don’t really match up to their personalities, and that allows fans to reevaluate them and perhaps, even bring them new fans. No matter what it is, there’s no doubt that these shows are incredibly fun to watch. If you have any favorites, let us know in the comments below!