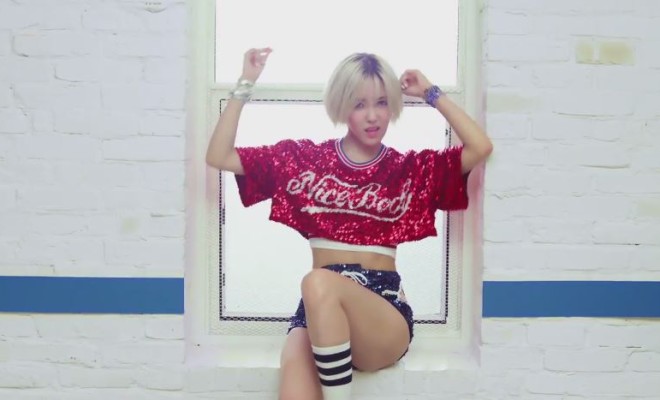 Hyomin tells you to diet if you want a boyfriend

When I was watching Hyomin’s comeback MV, Nice Body, I suddenly had a lot of question marks in my mind. Is this really how a star should encourage her fans? Is this really the message a responsible role model should give out?

I know, the song was written by someone else, and she has a management company that decides on concepts. But she did perform this, and she did perform it with a seductive smile on her face.

The video of Nice Body is about … having a nice body. There is nothing wrong with having a nice body. We could argue if Hyomin has a nice body or is just way too unhealthily thin, but that is not the point of this writing. My essential problem is that this video, and the lyrics of the song, written by Brave Brothers – a man – tells young girls that men will only find them attractive, if they have a “nice body” like Hyomin.

The song and the video basically objectifies women, into pretty Barbie dolls, who exercise and endure pain to look good – not for their own satisfaction, or to be healthy – but to appeal to men, to experience what it is like when men appreciate their bodies. Note, the body, and not the personality.

Hyomin is not encouraging us women to eat healthy and exercise, just to be healthy and feel good. No. You have to do it for the sake of men turning their heads around when they see your seducing legs.

Any woman goes on a diet at least once
When you’re a woman, you of course want to receive love
[…]
Any man, as if they’re all the same, love pretty women
Every man thinks about se* at least once
If only they were thinking about me

This is wrong on so many levels. In a society like ours, where women are constantly under pressure if they gain weight, especially in Korea, it’s like giving fuel to fire when a popular singer starts advocating dieting for the pure purpose of looking beautiful. If you are not thin as a pole, you are ugly. This is the message I get out of this video and this song. It shatters the already damaged self-confidence of young girls who have body image problems. It makes you feel guilty for all the wrong reasons.

After showing this MV to a couple of my friends, one of them said: “But it’s true. Men don’t want you, if you are not thin. Men only like thin women”. Wrong! Just go and do a quick poll on your own SNS timeline, you will be surprised to find that while men might squeel over thin bodies like Hyomin’s while watching videos, essentially they like women who have some nice flesh on. Or they don’t particularly consider it important for their partners to be thin. The truth is, that all these skinny models you see in magazines and on TV, including skinny female K-pop stars, only truly appeal to women, who believe the skinnier the better. Men like curves more, according to polls.

I am not blaming Hyomin for this concept, but I do think that it is a concept her company should have thought about twice, before releasing in this format. Because this is not empowering women, but making them into objects men desire, and can transform into dolls with the click of a tongue, if they so like.