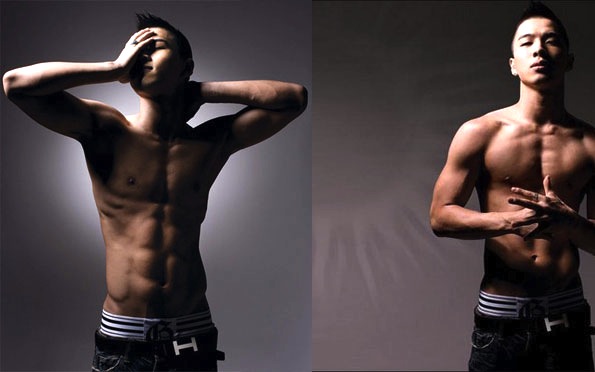 Just the other day, as I sat down to watch Taeyang’s music video for I Need a Girl, I was really excited when he appeared in a black suit. I love a man in a fitted, clean suit! Another of his outfits was a white tank top and white pants, and I also love a man in white!

But without warning, I was blindsided by his ‘chocolate abs.’ It was a little disturbing to me – why was he cornering Sandara from 2NE1 in a back alley at night without a shirt on? Where did his shirt go? Strangely enough, at that point, I lost interest in both the music video and the song because all I could think about was his missing shirt!

I realize that there are times when nakedness, or as I like to call it, ‘the nakey,’ is exciting and appealing in K-Pop productions: There are fans who would love to see their favorite idol rip off his shirt any day of the week! Male idols do a lot of work to get those ‘chocolate abs,’ and I am more than willing to appreciate their hard work . . . every once in a while! But it seems like ‘the nakey’ is becoming more and more popular, because it is showing up everywhere, and I’m getting kind of tired of it.

Let me explain exactly what the nakey is. The Nakey is something that both male and female K-Pop idols do, which normally involves taking off their shirt (yes, even for the girls!). It’s easier to concentrate on the male idols simply because they have ‘chocolate abs’ EVERYWHERE. I understand why they get nakey – to show off their abs, to show off how seducing they are, and to emphasize certain dance moves, but it actually takes away from recognizing and appreciating their singing and dancing skills! When an idol is shirtless, you’re not paying attention to how well he sings or how well he dances, you’re just waiting for him to do some body rolls and show you how those chocolate abs move. As an example, take a look at a Rain’s Love Song:

For most of the music video, Rain is clothed (which makes sense, since it’s a ballad). Starting at 1:52, he changes into a blinged-out bulletproof vest and baseball cap and does his famous sexy body rolls. Even with his vest on, I am totally convinced that he’s sexy just because of his moves – the man can really dance! But at 3:17, the vest comes off, then the tank top gets ripped off, and he does his body rolls again. At this point, it’s overkill – I figured out you were sexy with all your clothes on, so why take them off? The nakey can sometimes make a music video awkward simply because when it shows up, it may not actually make sense. If you need another example, check out U-Kiss in Shut Up! It gets more and more awkward from 1:27 onward, as they lose their clothes:

So this is where the ‘strategic nakey’ comes in. The strategic nakey is the clever use of clothing like mesh-backed shirts, cut-up pants, or anything with a low neckline, to emphasize an idol’s body. The strategic nakey is all about hinting at what you’ve got without completely giving everything away. I am a HUGE FAN of the strategic nakey, and my two favorite examples are in SS501’s Love Ya and SHINee’s Lucifer. Love Ya was the first K-Pop song I ever heard, so it has a special place in my heart and gets to go first:

Eyeliner and gothic theme aside, I love the mesh-backed shirts and low necklines they wear! They show just enough skin to make you wonder what exactly is underneath all that black mesh, without taking away from the song or the guys themselves. While the guys caught my attention because of their looks, SS501 became the first K-Pop group I loved because of their music, not because of their bodies. If I only liked their bodies, I wouldn’t have tried to find out more about them. By seeing their use of the strategic nakey, I became curious about what else they could offer and found other videos like A Song Calling for You, Love Like This, and even some earlier stuff like Unlock.

SHINee’s Lucifer is another great example of a different type of Strategic Nakey, with cut-out clothing.

Unless you’ve seen the video as many times as I have, you might have been surprised when Jonghyun turned around at 3:49 to reveal that not only was most of his back exposed, thanks to a cut-out of his leather vest, but he also only had one complete pant leg, leaving the back of one of his legs entirely exposed! If you HAVE watched the music video as often as I have, then you know that there are little flashes of his leg and back throughout the entire video. This is so much more appealing than a straightforward display of chocolate abs because you rarely get to see a male idol’s legs, let alone just his back and not his abs! This is an use of strategic nakey, not only because the amount of what is shown is limited, but also because the parts of Jonghyun that are exposed are not your typical nakey, but are different and so much more exciting! Since then, I’ve gone out of my way to find some of his promotional photos from the Lucifer album. This one is my personal favorite: Here is what the strategic nakey is NOT: It is not about quick flashes and sudden surprises. It’s about subtle hints and revealing just enough to make you curious. This time, my example is a quick ab-flash done by none other than SS501’s Kim Hyung Joon (‘Baby’ Joon) during one of the live performances of Déjà Vu.

While the low-cut tank tops definitely caught my eye (how could they not?!), I completely MISSED Hyung Joon’s ab-flash! My friends couldn’t believe that I had missed something so ‘obvious,’ and we had to re-watch that particular part and pause it on him so that I could actually see what happened. Did you miss it, too? Watch the video again, it’s at 2:29. Such flashes and surprises are just too quick for a fan to appreciate, which makes it an unfair use of Strategic Nakey! It makes fans frustrated, confused, and, at least in my case, can even cause Kpop Amnesia. I have actually missed his ab-flash on more than one occasion – unless I am specifically looking for it during a live performance of Déjà Vu, I will miss it every time. I may physically see his ab-flash, but my mind will instantly block it out.

There’s one thing I like even more than Strategic Nakey, something that I call ‘keeping the mystery.’ The bottom line with the total nakey is that once you lose your shirt, I stop concentrating on what you can do, and start concentrating on how you look. Honestly, I get tired of seeing chocolate abs, and they actually start to get boring. The strategic nakey lasts longer and makes me concentrate on the song and the music video, giving me just enough to stay interested without giving me Kpop Amnesia. I can look forward to the next music video because of curiosity alone – there are just more options for new and exciting of strategic nakey when you haven’t shown off everything you have in the first video. Keeping the mystery, though, is one of the sexiest things an idol can do. Keeping the mystery means keeping your clothes ON, leaving what lies underneath them a ‘mystery.’ Before you think that’s boring, hear me out: Have you seen the dance version of TVXQ’s Before U Go?

I melt every time I see this video. Every single time. Everyone is well-dressed in white suits or black outfits, the dance is extremely sexy, and they keep their clothes on the entire time. I don’t need to see their bodies to know for a fact that these guys are talented dancers, great vocalists, and, of course, super attractive. I don’t get bored of watching it because I don’t become immune to the video. It’s the same way with BEAST’s Bad Girl: it keeps the idols completely clothed, while convincing me that they are great singers and sexy dancers.

There are a lot of things that can happen in a music video to make an idol sexy and attractive while keeping the Mystery. Have you watched MBLAQ’s Cry?

The boys are well-dressed and have the Rain-like dance moves, but they also dance – fully clothed – as they are being drenched in water. Water runs down their faces, they punch the water, they kick the water, and the water makes their clothes stick to their bodies – all of that is more attractive to me than Rain’s Love Song because it leaves more to my imagination. 2PM does a similar thing in Without U, at least until someone loses his shirt at 3:44.

Another way of Keeping the mystery includes any sort of physical activity. Take a look at SS501’s Fighter:

The guys are drenched in sweat, hitting punching bags, jumping rope, doing push-ups, doing sit-ups, all while completely clothed. It’s almost like they’re saying “We’re sexy, we’re strong, we’re manly, but we’re not taking our clothes off for you.” This is so attractive simply because they won’t just let you take a peek at their bodies – you have to wait patiently (and have a very sharp eye) to see the strategic nakey from them! But for me, it’s worth it.

I stay interested in the idols I love because I think they are talented singers and dancers, not because I think they’ve got hot bodies. I need Strategic Nakey every once in a while to keep things interesting, but I don’t want my idols to suddenly lose all of their shirts and run around in nothing but leather pants and chocolate abs. I fell in love with them with their clothes ON, so it makes me a little disappointed when they resort to total nakey because it takes away from their actual talent. Like I said, there is no new version of chocolate abs, but idols find new and fashionable ways of keeping the mystery and using the strategic nakey all the time – because it’s always changing, it’s always unexpected and exciting. Besides, I like a little mystery in my idols.