The Secret to BIGBANG’s Major Success

On the 19th of August, eight years ago, in 2006, a new band debuted under YG Entertainment. Named BIGBANG, the band rose to fame after the 2007 hit Lies and the members since have been named leaders of the Korean wave, winning multiple trophies at home and internationally. They are considered fanshion trend setters, their 2012 Alive World Tour drew a mass of 800,000 fans in 48 concerts, and they performed their 2013 Japan dome tour of just 6 venues in front of 700,000 fans, breaking ticket sales records in the country with $70 million.

Although it is difficult to provide exact numbers of album sales, based on various sources (Industry Association of Korea archives, GAON and Oricon data), the band sold nearly 4 million copies of its albums in Korea and Japan, excluding sales for solo projects, singles and DVD, and sales in other countries, where numbers are difficult to follow properly. During its 8 years in the industry, BIGBANG produced 15 number one hits and 24 other songs that were in the Top 10 on at least one music chart*. Nine of the top hits were co-composed by leader G-Dragon.

What makes BIGBANG so successful, when there are literally hundreds of K-pop bands out there?

Although there are multiple recipes to success, one thing is sure: music does matter. The quality of songs a band releases can make or break a career in the long run. However successful you can start out, if later on your quality drops, people will eventually go elsewhere. BIGBANG has maintained the quality of its music, and its hits are not just hits because of its large fanclub, the VIPs, would buy anything no matter what.

BIGBANG is among the very few K-pop acts whose music can appeal to a broader mainstream audience. This is why Gawker named Bad Boy the new perfect pop song, calling it a hit that “transcends language”. Jill Scott, Grammy-winning singer-songwriter tweeted this very song to her followers, calling it “dope” and “fresh”. K-pop is often degraded to bubblegum pop level by many in the West, so when well-known and acclaimed musicians (who have no connections to K-pop agencies whatsoever, and so are unbiased) start noticing a K-pop band for the music, it really matters and shows that K-pop is not only about colourful visuals and dance routines, as critics often claim. But that the music is comparable to Western hits in terms of quality, too.

Some bands and solo singers fall into the trap of never changing. Once they find a successful recipe, they follow it to extremes, churning out similar sounding songs.  Like ballad singers who are not willing to come out of their perfectly built ivory towers, or bands that mostly produce upbeat dub-step dance tracks.

BIGBANG, compared to these artists, is all over the place. Some might say that this makes them incoherent or scattered musically, but in my opinion the diversity of genres the members produce in only makes them stronger. BIGBANG is willing to experiment, and the members have an agency that lets them experiment. From ballads to hip hop to electronica to R&B and even rock, there’s hardly a mainstream genre they haven’t tried over the years. Diversity also means it’s never going to be boring, and that you can never know what to expect from their next release. It maintains the excitement over time and they always come across as fresh and new, despite already being old foxes in this industry. They constantly renew not only their image, visuals and clothing style, but their music, as well.

Who knew they would fit rock infused pop, too?

Want to hear BIGBANG fuse pop and reggae? There you go!

Visual experience is important in K-pop, and so is what you actually do on the stage. Either you own the stage or the stage owns you, and BIGBANG not only owns the stage but rules it. Those who have been to live shows, often say that BIGBANG concerts are a must, providing the very best experiences one could ever dream about, even getting positive reviews from foreign news outlets. Big Shows, as they were known before the world tour, live up to the name; they are not only grandiose, but vibrantly entertaining too.

Taeyang is a like a Duracell bunny, never stopping for even a second (if you have seen this famous commercial), G-Dragon is the epitome of coolness and swagger, virtually ruling over the stage like a king, TOP provides the stable center, with his calmness, firm stance and deep voice, Daesung is a happy puppy with an angel’s voice and Seungri is the perfect comedian. As a combination, they entertain the crowd like no one else.

Everyone is an individual, in every band. But in some bands, more than in others, the strategy is to show individual colors, and not make the band members blend into the same concept. In some bands this is done by infamously forcing certain personality traits on members (“the cool one”, “the angel maknae”, “the badass”, “the fool” etc.). In the long run, these will eventually break down, as it is impossible to play a character every hour of every day of every year. Showing your natural self works best, and BIGBANG members are as colourful as their musical versatility suggests.

We have said everything about G-Dragon already, from his career path to his incredible visual versatility. He is, by far, one of the most exciting and unique artists in South Korea now, and his prism of multiple colors, including his song-writing skills, elevates BIGBANG to another level. A leader who carefully considers options and has kept his band members together for 8 years now; he fits the meaning of the color red most: energy, power, passion, leadership and revolution. 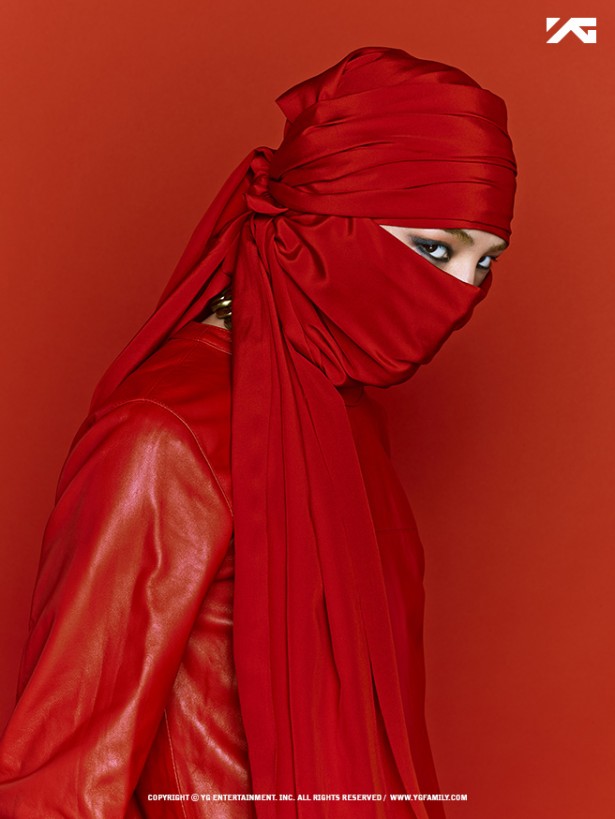 G-Dragon on a poster for his Coup d’Etat release. Source: ygfamily.com

A soulful R&B singer, Taeyang is a calm, wise, natural, almost fatherly person, considered to be reliable and stable, honest and genuine at all times, with a comforting smile. Although he is truly passionate and basically a perpetual moving machine on stage, the color brown fits him most, which is the most down-to-earth shade on the color palette. Radiating warmth and tranquillity; it’s a very pleasant color to look at.

A happy-go-lucky man, who views life through a positive pair of glasses, a devoted Christian, and the most cheerful member of BIGBANG. Daesung, in the beginning of his career, was made fun of his “unconventional” (aka non-K-pop-standard) looks. He has had ups and downs, with his most serious challenge being the fatal car crash where a motorcyclist died. Though he was not guilty in the accident, it took him a long time to cope and for the cheerful side of Daesung to return. He’s a fun, optimistic person, whose smile shines like a ray of light, his angelic voice bringing warmth and happiness, and he is a true comedian, invited by various variety shows – thus Daesung’s color is yellow on the BIGBANG color chart.

It is difficult to define T.O.P’s color, as he has a conflicting personality. At times serious, calm, centered and brotherly, he can lose himself and get crazy, unpredictable, goofy and clueless. Nicknamed ‘Bingu’ or ‘Fool’, he projects a manly aura coupled with unexpected goofiness. He is a confident and brutally skilful rapper, but is unable to fully learn choreographies and dance well. He has mastered acting in serious movies, but can at any time get down from the pedestal and randomly slap G-Dragon in the face during a show. He’s a Joker, skilled in multiple crafts but mysterious at the same time (remember how he refuses to go shirtless?). He probably would be a combination of the color silver – projecting magnificence, elegance, shining bright and balancing the other colors on the palette of his band; gold – projecting charisma and manliness; toned down with the playful color of orange.

….and village idiot at the same time. Source: bigbanggifs.tumblr.com

Everyone’s favourite panda, maknae Seungri perfectly fits the color orange. It’s a fun color, full of liveliness and optimism. Seungri is an extremely extroverted person, whose character demands to be in the spotlight – and if he doesn’t get it automatically, he will go and claim it himself. He cracks up his band members, he is sometimes silly and unreasonable, but at the same time extremely sociable. He has a wide circle of friends and acquaintances in the music industry, and practically knows everyone. Orange is also the color of foxes, so don’t get fooled by his sweet words and that his hyungs regularly tease him to death – Seungri is a serious and capable businessman when he needs to be one, who had even gotten advertisement deals for BIGBANG with his amazing networking skills.

all the time. (Source: bigbanggifs.tumblr.com)

BIGBANG’s success can also be attributed to this ability of retaining its members’ individual colors while creating a team that is able to work exceptionally well together, creating synergy between the individuals who are as different from each other personality-wise, as are the different colors of the rainbow. Together, just like the rainbow, they shine bright and beautiful.

We at hellokpop cannot wait for their new album to be released, hopefully at the end of this year.

*Note: Music chart here means official physical sales of singles and the related position on GAON/Oricon, not the digital music portals like Melon, Daum etc, as they only reflect momentary popularity and not long term sales.