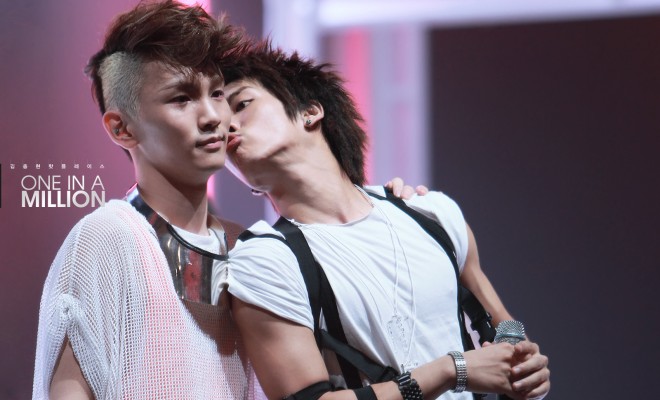 The biggest obstacles of K-pop

By Xiaolong | May 6, 2014
230
SHARES
FacebookTwitter
SubscribeGoogleWhatsappPinterestDiggRedditStumbleuponVkWeiboPocketTumblrMailMeneameOdnoklassniki

Even though K-pop is expanding its markets, we still have not experienced a breakthrough for bands, especially male bands. What is the biggest obstacle for male K-pop stars in conquering the Western industry? Well, in my opinion it is prejudice, created by sheer ignorance of cultural differences and our habitual tagging of people according to schematic principles. In short: make-up and making out.

A few weeks ago I finally could put my hands on my precious original copy of Jaejoong’s I mini album. Excited, I opened it immediately and started rushing through the jacket photos. My mom – the true representation of a typical European conservative – came over and took a peek at them.

Mom: “You and your Chinese singers again.”

Mom: “Whatever. But she does look really beautiful.”

Mom: “But he wears eyeliners. And is that lipstick?”

Me: “Yeah and lip gloss, too. And his nails are manicured and polished black. So what? Does that make him gay?”

Mom shrugged her shoulders: “A man should be manly. He looks like a woman. Only gay men look like women.”

I guess many of you have heard this before from family members or friends. It takes serious time and effort to convince them that make-up won’t necessarily make someone gay. Why are we so obsessed to link non-belonging things together? Perhaps when one thinks of men wearing make-up, it is Boy George who comes to mind. Or maybe we associate male make-up with drag queens automatically?

Still, I pose the question: does the fact of wearing make-up indicate someone’s gender orientation? Especially that we are talking about the entertainment industry here. K-pop is a very special package. Visuals are important for some Western artists as well, think Lady Gaga; but even before Gaga, artists have used extreme make-up and accessories to express their artistry (Kiss, Marilyn Manson). True, in Western pop it is mostly women or genres associated with rebellion and provocation that use these tools. Does this mean others cannot, or if they do, they do it out of gender orientation? If you are Western punk rocker with red lipstick, that’s cool and provocative, if you are a Korean K-pop star with blue eye shadow, you are gay? 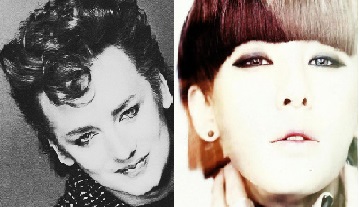 True, there is one aspect of K-pop culture that I am also extremely uncomfortable with, and this is bromantic fan service in the extremes. It’s very, very difficult to convince my friends of the opposite attraction of K-pop stars when you see members of Super Junior, for example, literally making out and touching each other on stage, on photos, on TV, everywhere. And what makes me even more uncomfortable is that Korean fans find this cute. Yes, these are cultural differences and it takes effort, time and patience to actually try and understand why male bands behave like this.

For some reason, women making out are fine with Western audiences (think Madonna and Britney Spears’ infamous on-stage kiss) but when male entertainers do the same, it’s somehow considered gross and gay. In general, society tends to accept lesbianism more than gayness, so K-pop girl band behaviour is on the safer side with regards to such Western labels.

Bromance became such a built-in feature in K-pop that you cannot simply ignore it. It comes with the package once you fall for a boy band, so either you take it or … you take it. Bromance is enhanced by the nature of Korean/Asian society where expression of feelings among same gender people are more accepted in public than emotions between men and women.

If you watch Korean variety shows, you notice how men and women traditionally keep a certain distance or even behave in an awkward way around each other, unless they are really good friends. The other fuel for bromance is a very simple reason in fact: marketing. It’s an effective selling tool, as bromance makes a band look more integrated, more family-like, a group of very good friends who care for each other outside of business as well. At least this is the projected image. It endears a band, fans can feel more emotionally attached and it also gives the impression that because the boys are on such good terms, the band has a long future together, so no need to be afraid of quarrels and break-ups.

“Bromance, nothing really gay about it […] A brotha from anotha motha never knew how much I loved ya”.
Music video by Ryan Higa & Chester See.

Competition in K-pop is extremely high. Even though it has an extensive audience internationally, the main markets are still Korea and Japan, which means the numerous bands need to grab attention, be edgy and stand out. Visual enhancement, meaning make-up and fashion items, as well as behavior and the ability to grow the fan base are of key importance to survival.

This is what makes K-pop really special and unique. However, this is also the biggest obstacle in conquering the West. Unless bands change their visual marketing or general Western audiences become more open and accepting, I don’t see a bright future for male bands in the world of Western mainstream pop.