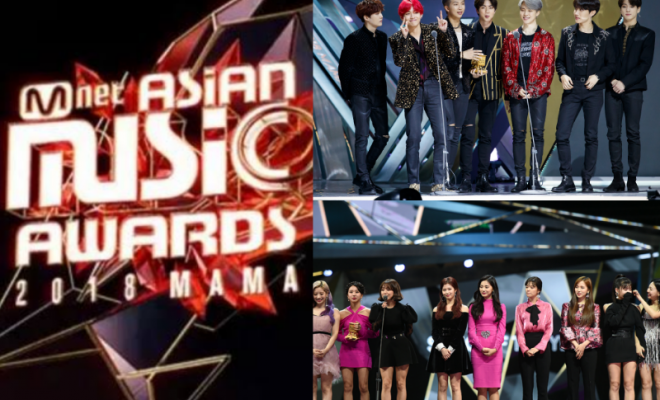 BTS caps off a year full of achievements with an emotional speech accepting awards for the Best Artist and Best Album of 2018 MAMA.

The finale celebration in Hong Kong concluded 2018 MAMA Week, which was held in Korea on December 10 and Japan on December 12.

The red carpet and award show of 2018 MAMA in HONG KONG was aired live via Mnet and major channels throughout Asia, such as Mwave, YouTube, Naver TV, V Live and more covering over 200 regions worldwide.

CJ ENM reported that during the red carpet alone, more than 9.2 million votes were casted for the Best Asian Style, and MAMA ranked number one for worldwide Twitter trends, solidifying MAMA’s global presence and buzz among global music fans.

More than 14,000 fans gathered at the AsiaWorld-Expo Arena to see their favorite artists perform, which included a star-studded lineup: BTS, Chung Ha, GOT7, Heize, IZ*ONE, Roy Kim, WANNA ONE, Seventeen, Sunmi, and more.

Hosted by Korea’s well-loved actor Song Joong Ki, 2018 MAMA was completed with artists from all across the globe to perform and present awards. Pop legend Janet Jackson not only surprised music fans with her appearance, but also took home the Janet Jackson Inspiration Award.

Meanwhile, BTS took home two awards; Album of the Year and Song of the Year, and the team teared up as they delivered an emotional acceptance speech.

Other big winners of the night included TWICE, who was also in tears with their Song of the Year win “What is Love?”, as well as Best Female Group.

2018 MAMA concluded its most spectacular year joined by a total of 40 thousand fans onsite and another 32 million fans who had watched the show live online.