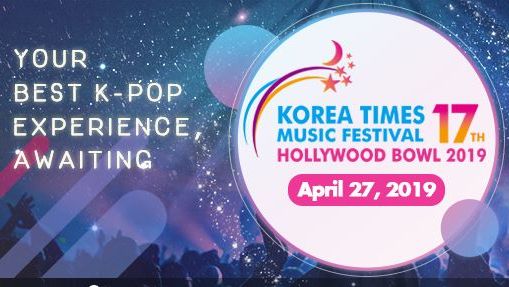 The Korea Times Music Festival is back this year with a great lineup of artists!

This year’s Korea Times Music Festival will be bringing some of your favorite artists to Hollywood!

Set to be held on April 27, this year’s event is the 17th edition of the annual festival held in the famous Hollywood Bowl in California. With the aim of putting audiences at the center of the Korean wave, the festival makes sure to present enjoyable stages every year.

Some of the industry’s legendary music icons will also be performing, like the father of trot Tae Jin Ah and hip hop trio DJ doc. Indie rock band Yuk Joong Wan Band and girl group Lovelyz will also take the stage this year to showcase their musical talents.

Last year, the festival brought a stellar lineup including Red Velvet, NCT 127, BTOB, EXID, and superstar Rain as performers, among others.

Stay tuned for more announcements regarding the event through the Korea Times Music Festival’s Facebook page.

Are you interested in this year’s Korea Times Music Festival lineup? Let us know by leaving a comment below, giving us a holler on Facebook, or tweeting us at @hellokpop!