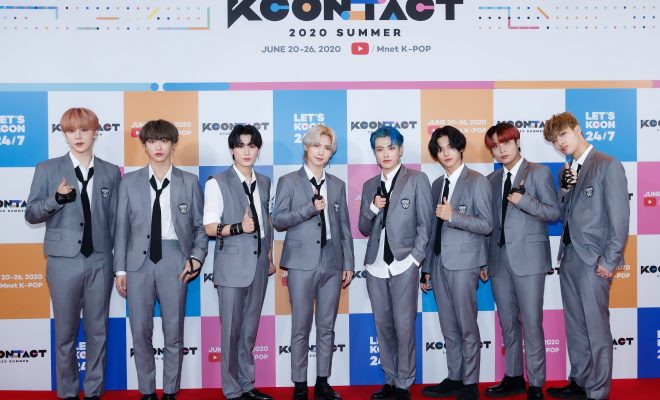 ATEEZ dominates the stage at KCON:TACT in a series of seven intense stages, reasserting their leading force among K-pop’s fourth generation!

ATEEZ had the internet buzzing with anticipation following the announcement of their participation in KCON’s digital concert KCON:TACT. Known for both their commanding stage presence and distinct global demand, the expectations were high for the group’s performances. ATEEZ rose to the challenge. In a mix of seven impressive stages showing their versatility and charm, the group captured viewers’ attention. 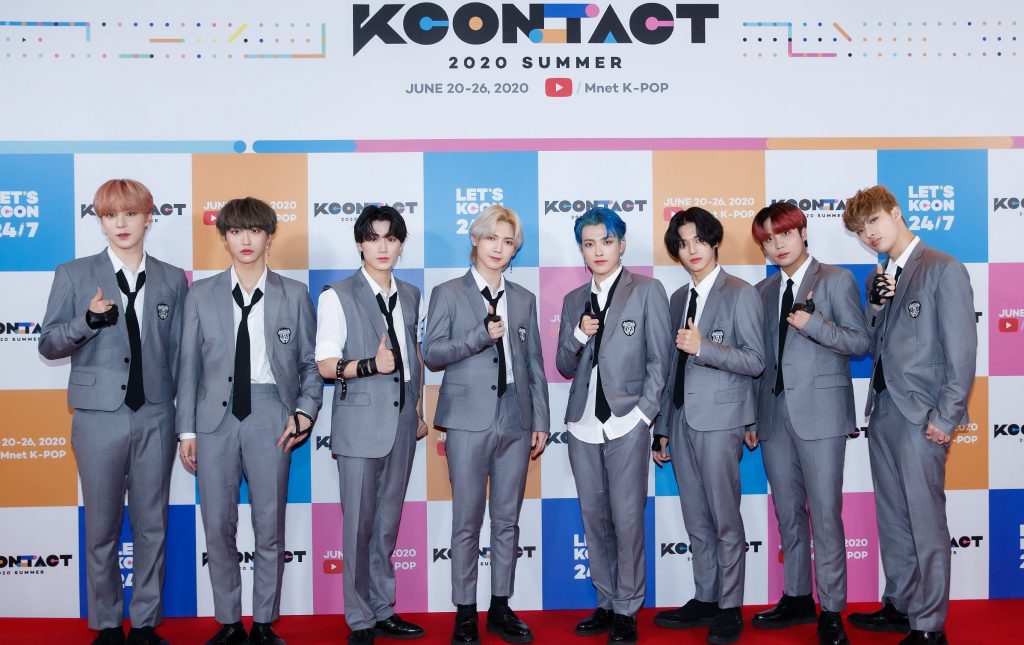 ATEEZ was the opening and closing act for KCON:TACT’s final event, wrapping up a week’s worth of concerts. Though Jongho could only sing due to a previous leg fracture, and Seonghwa was absent from performances due to a hip sprain, the group’s signature stage allure still filled the room.

The subtle comeback hints which were sprinkled throughout their stages additionally thrilled fans.

ATEEZ stunned with their opening stage for the concert. The group began dancing to an electronic-techno track, using choreography recalling their previous releases. A segment in which all members pointed to Wooyoung as he grasped his throat was reminiscent to his chained scene in their “Wonderland” music video. Members transitioned to holding their hands up to their mouths as if drinking, a similar move seen in “Answer” and during their special stage at the Golden Disk Awards earlier this year.

The latter end of their opening stage featured a remix of their track “HALA HALA”. Their backup dancers wore the outfits seen in the song’s performance video, evoking fans’ curiosity on whether “dark ATEEZ” will reappear in their narrative universe during their next comeback.

The FINAL day of #KCONTACT kicks off with a DAZZLING opening performance by @ATEEZofficial! ✨ ATINY, are you watching?!

ATEEZ shared sweet moments with fans during their meet and greet. Hosted by Eric Nam, the members completed a drawing guessing game in which ATEEZ drew popular K-Pop dances and their fellow members guessed what they were.

ATEEZ also interacted with a live audience comprised of ATINYs from all over the world, answering a series of their questions.

Notably, Eric Nam, who has admired ATEEZ in the past, continued to praise the group as he remarked on their charisma during the meet and greet, stating, “I can see why people call you guys the global K-Pop star of the next generation.”

ATINY! @ATEEZofficial IS IN THE HOUSE! Join us for their MEET & GREET and send live messages for #ATEEZ to read right now! ?

Following their fan event, the group moved on to perform their highly anticipated cover stage for EXO’s “Growl”. ATEEZ covered the song back in 2018 before their debut, and their newest cover of the song had fans fondly reminiscing on their journey since then.

A LEGENDARY COVER OF EXO'S "GROWL" BY @ATEEZofficial WAS EVERYTHING WE COULD HAVE WANTED ?

Emerging to conclude KCON:TACT, ATEEZ boasted their various charms in a versatile setlist. The group began with their most recent title track, “Answer”. During the stage, a never-before-seen VCR of a classroom burning was played in the back. ATEEZ has been known to use their background VCRs for comeback hints, leaving many in speculation that the fiery classroom may be included in their next concept.

The group moved on to their beloved summer track, titled “Wave”. Surprising fans, the group serenaded ATINYs with their older ballad, “Light”. 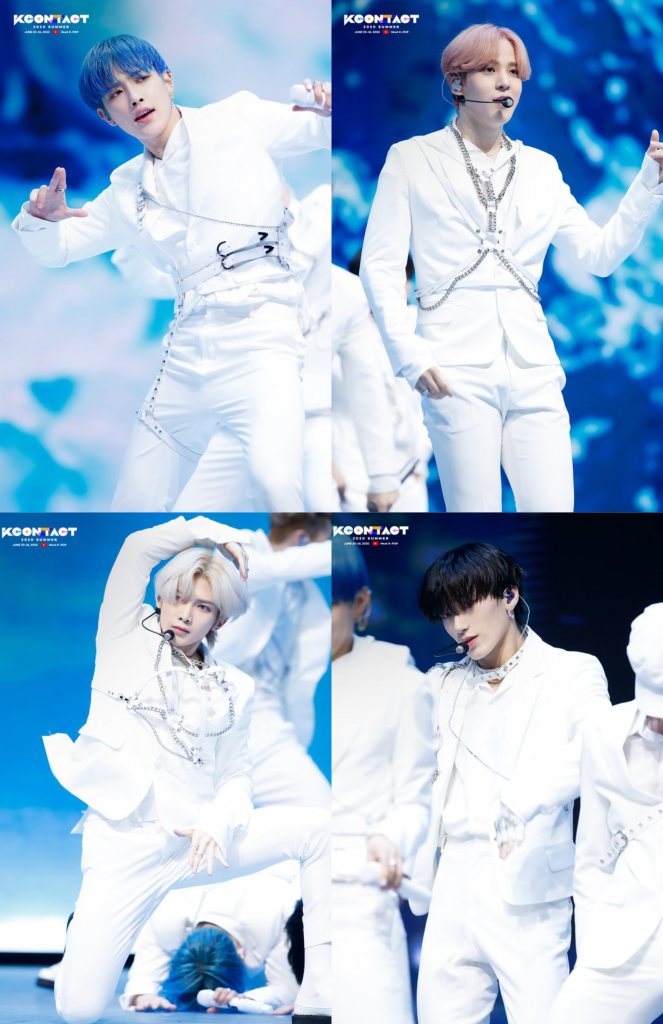 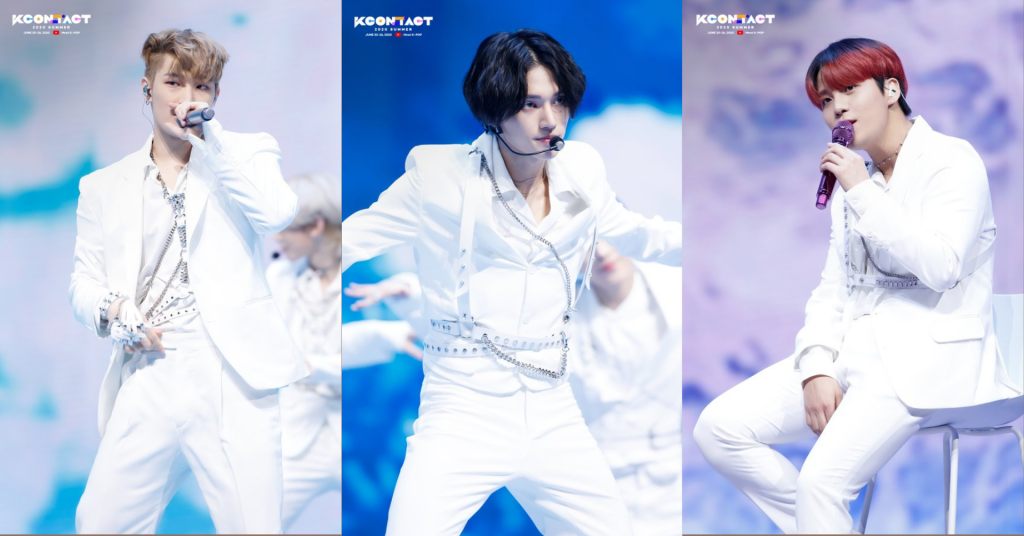 ATEEZ transitioned into a darker end by performing their popular song “Say My Name”. To finish the night, the members performed “HALA HALA”, and played the same VCR seen in their recent online concert, a video suspected to contain numerous comeback hints. 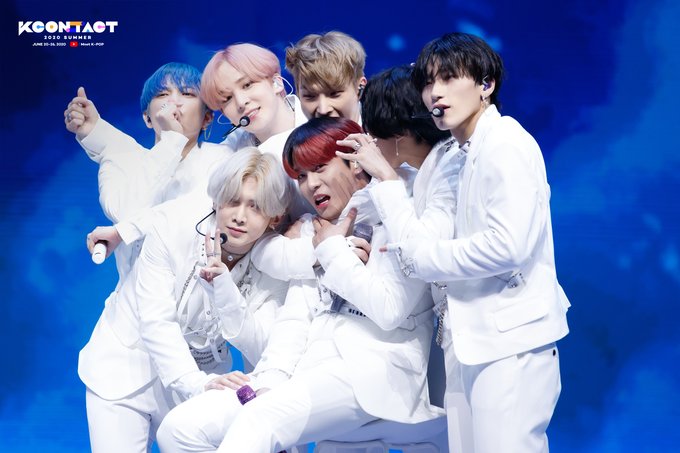 ATEEZ bid their fans one last affectionate farewell by thanking their shining light, ATINYs, for tuning into the show and sending their constant support. The boys stated, “We prepared hard to reciprocate the love we received so far. It was a meaningful time and we will continue to develop and show good looks, so we look forward to your expectations.”