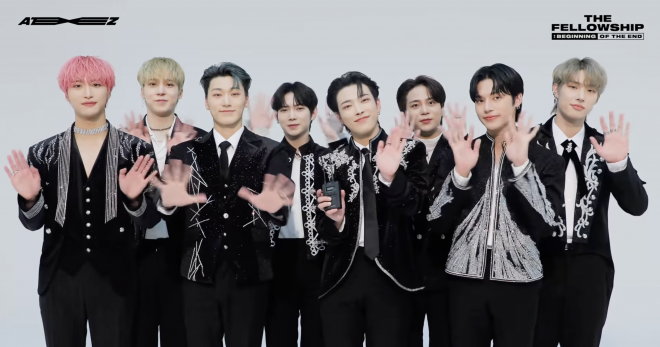 ATEEZ To Begin Their Anticipated “THE FELLOWSHIP: BEGINNING OF THE END” World Tour

ATEEZ will greet eager fans during the kick-off concert for their global tour THE FELLOWSHIP: BEGINNING OF THE END.

ATEEZ will finally meet their awaiting fans during the first stop of their worldwide tour, THE FELLOWSHIP: BEGINNING OF THE END. The group will kick off their tour during the Seoul stops at Olympic Hall. The Seoul leg begins on January 7 until the 9th.

ATEEZ will greet their worldwide fans, who have been waiting to see them since 2020 when the original tour dates were postponed due to the outbreak of the pandemic.

In preparation for the tour, the group unveiled special countdown videos on their official YouTube channel daily, starting last week. During the videos, the members expressed their own excitement for the concerts and their happiness that they will reunite with fans face-to-face.

In the videos, ATEEZ shared, “We’re holding a solo concert in Seoul again in about two years. I’m so happy to meet ATINY again like this, and I want to meet them as soon as possible. We are preparing a stage that we have not shown for two years, so we hope we can make fun memories together. We are preparing intense and tremendous stages.”

Amidst their tour, the group is making every effort to conduct the concert safely in alignment with COVID-19 safety protocols. On January 4, ATEEZ’s official fancafe shared a notice that fans will receive castanets to use for the fan chant. In this manner, ATINYs will still be able to share their warm support for the members’ while remaining safe.

Castanets trended on Twitter in response to the announcement, providing fans with lighthearted fun imagining the concert while delivering touching feelings at the group’s efforts to keep them safe.

Meanwhile, THE FELLOWSHIP: BEGINNING OF THE END will begin in Seoul on January 7.