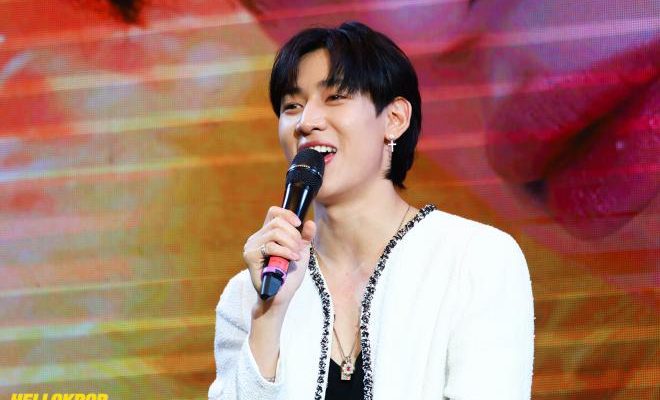 BAMBAM and his charming and honest remarks capture the hearts of the Filipino Ahgases during his press conference and fansign event in Manila.

With the loud cheers from the crowd even before the press conference started, BamBam was warmly welcomed by the Filipino Ahgases on July 28. He greeted everyone even the people on the second and third floors, no one was left behind. 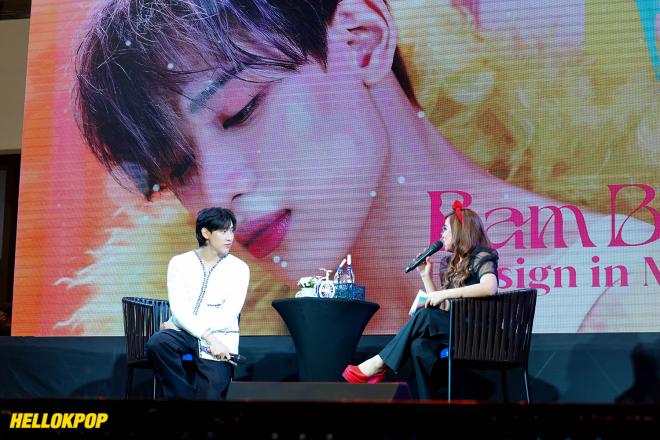 Talking about his fan meeting in Cebu the day before, BamBam said he had a lot of fun but it was a shame he didn’t have the time to explore the city. He also shared that his PH bucket list includes going to the beach and going to night markets.

On to his next album, Bambam is already working on it. He said can’t say much but he hinted that it’s gonna be a not-so-bright concept and he really hopes that his fans will like it.

When asked if BamBam landed a drama role, the role he wants to play would be “bad boy or playboy,” which made his fans scream. He is such a tease and his fans really love it! 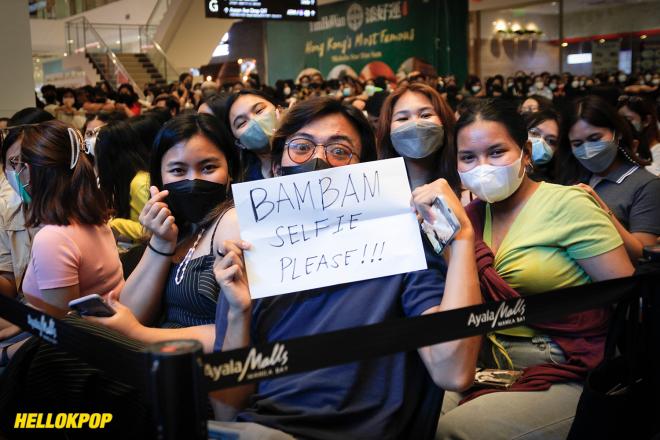 From GOT7 to going solo

Since he went solo, BamBam confessed that it changed his life. The way he thinks changes around the people around him and he’s able to go to a lot of places. He remarked that he changed for the better.

Running down the personal growth experience he had, BamBam is proud of dancing, communicating with different people, and Ahgases. He added that he’s proud of Got7. 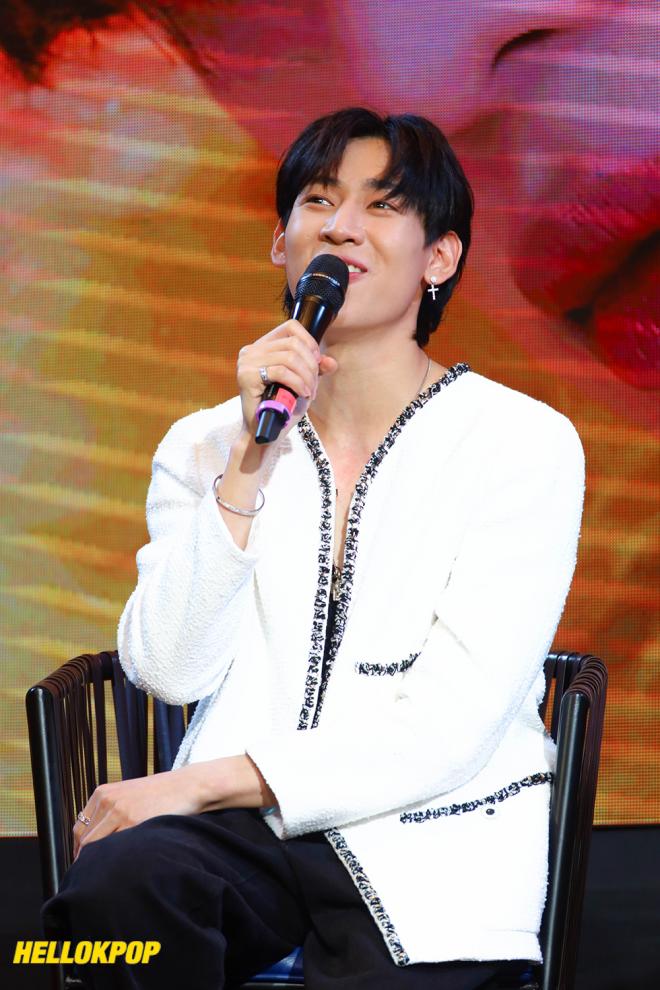 BamBam went down memory lane and said his memorable encounter with the Filipino fans was their concert in Manila 6 years ago where he sang the Filipino song, “Ngiti.” The fans were chanting “sample” but BamBam told them to watch the 2022 K-pop Masterz in Manila concert the next day and anticipate what stage he prepared for the fans.

Moreover, when asked who he asked for advice when creating music, BamBam playfully responds the boys will steal so he let them listen to solo songs only. He shared that one time he heard Yugyeom’s songs and realized it has the concept as him so he purposely changed his concept.

BamBam shared in his past vlives that he likes the song “Leaves” by Ben&Ben. And if given a chance, he would like to collaborate with James Reid. Recently, we have been seeing BamBam with Filipino artists, James Reid and Liza Soberano.

BamBam revealed his preshow ritual includes drinking Redbull energy drink and if being honest, sometimes he drinks Tequila before performing. Meeting fans after two years makes him all pumped up to perform!

The song that represents BamBam is his song, “RiBBon.” “It’s just really me,” he said. 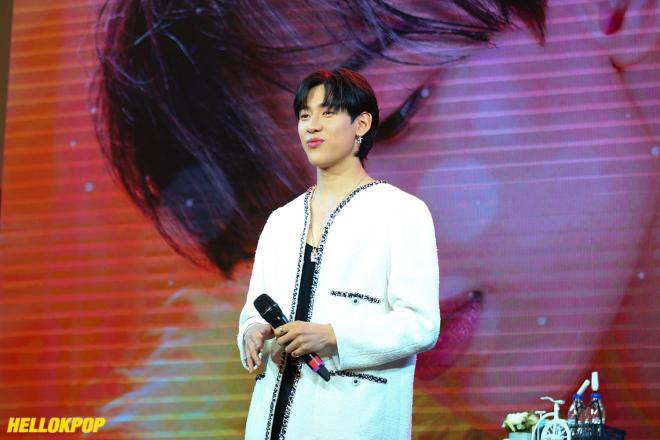 For the event’s BamBam TMI, he confessed went to the comfort room thrice because of the sisig he ate the other night. For something random about him, he likes shopping at Galleria located in Apgujeong, Korea.

Meanwhile, BamBam’s plans for the rest of 2022 are to stay healthy and to stay happy.

BamBam was once again welcomed by the happy screams and pumped up the crowd by performing his song, “RiBBon.”

Just before the fan signing starts, he removed the acrylic divider to have a better interaction with his fans showing his genuine warmth to communicate with his fans. 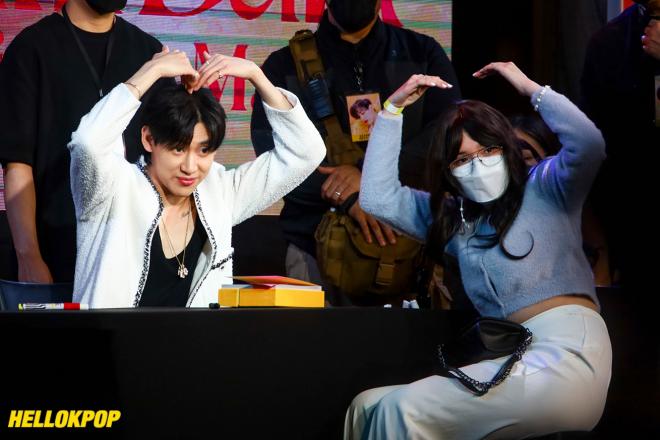 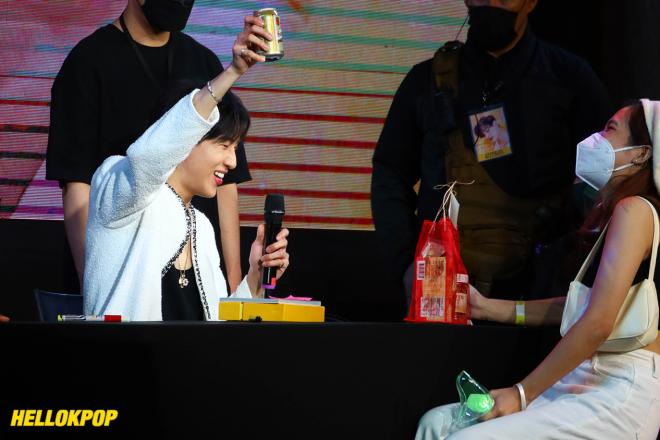 In another candid moment, BamBam and his heart-stopping fan service delighted the fans. He says “shot puno!” while holding a beer given by a fan.

The fanmeeting ended with a surprise video from the Filipino Ahgases for BamBam and a photo with the crowd. 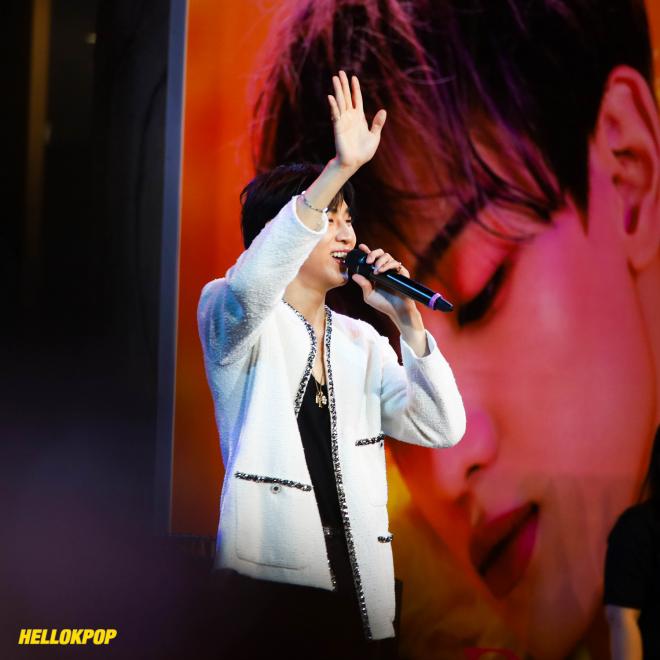 HelloKpop Team extends gratitude to CDM Entertainment for the media invite. The BamBam Fansign in Manila was covered by abbyinhallyuland and Sarah Delluta.