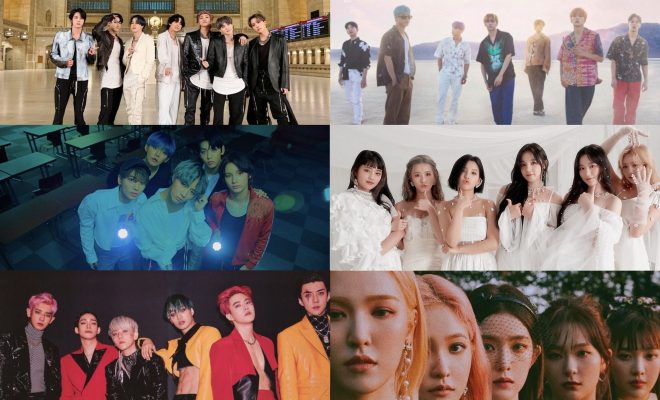 MTV has announced an exciting line-up of nominations for its Video Music Awards and some of K-Pop’s favorite artists have been nominated to take the Moon Person home!

On July 30, MTV announced its official list of nominees for this year’s Video Music Awards. The nominations feature some of K-Pop’s ace artists and some in multiple categories, including a chance to win the coveted Moon Person.

BTS has unsurprisingly taken positions in three spots on the list. The septet has been nominated for their hit number “ON” from their comeback album Map Of The Soul:7, under the “Best Pop,” “Best K-Pop” and “Best Choreography” categories.

MONSTA X has proved that they are powerhouse artists through their amazing music and out of the box styles. And it was no different with their all English album All About Luv, that not only surpassed 100 million streams on Spotify, but also earned them a spot in MTV VMAs “Best K-Pop” category for their track “Someone’s Someone”.

The young group has steadily impressed fans with their showstopping visuals and impeccable music style. And the MTV VMAs definitely see them for that as the group is set to compete against their senior label mates BTS for the crown of the “Best K-Kpop” category, with their magical music video of their track “9 and Three Quarters (Run Away)”.

(G)I-DLE is what girl power is all about! The group is one that has wowed listeners with their eclectic music. The girl group’s recent urban hip-hop track “Oh my god,” earned acclaim for its bold and cinematic music video, which in turn resulted into a nomination for the “Best K-Pop” category.

EXO’s music video for their dynamic number “Obsession” is exquisite to say the least. It showcased powerful performances by the members who brought the theme of obsession to life in an ingenious way. The group truly left viewers obsessed with “Obsession” as evident with their nomination on the “Best K-Pop” category.

The girl group left fans speechless with their grandiose music video for their track “Psycho”. Red Velvet looked like visions amidst the mesmerizing cinematography of the video and it truly be psycho-tic if the group hadn’t landed a nomination on the “Best K-Pop” category after it.

Fans can place their votes here.

Hellokpop, as an independent Korean entertainment news website (without influence from any agency or corporation), we need your support! If you have enjoyed our work, consider to support us with a one-time or recurring donation from as low as US$5 to keep our site going! Donate securely below via Stripe, Paypal, Apple Pay or Google Wallet.
FacebookTwitter
SubscribeGoogleWhatsappPinterestDiggRedditStumbleuponVkWeiboPocketTumblrMailMeneameOdnoklassniki
Related Items(G)-I-DleBTSEXOmonsta xMTV VMARed VelvetTXT
← Previous Story James Lee Showcases Versatility On His New Album “CASTLES”
Next Story → Enter Into A World Of Spellbinding Beauty With These Magical Music Videos By TWICE