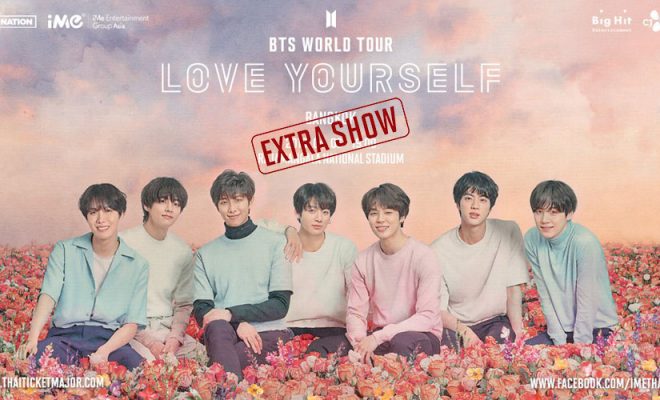 BTS Adds Another Show In Thailand Stop Of “Love Yourself” Tour

Thai ARMYs, thanks to your overwhelming support, BTS will see you two days in a row next year!

Thai ARMYs wasted no time to show the world how much BTS means to them as they bought out tickets to the Thailand stop of the boys’ Love Yourself world tour on the same day as the start of ticketing on December 15.

Due to the overwhelming support of fans, IME Thailand added another day to the initial one-night-only concert. The boy group will treat fans to back-to-back concerts on April 6 and 7 at the Rajamangala National Stadium.

Tickets to the second day of Love Yourself in Bangkok will go on sale on December 22 at 10 a.m. local time via Thai Ticket Major outlets and online at www.thaiticketmajor.com.

Tickets are priced at:

Those who will purchase tickets priced at 6,800 THB will have the chance to be one of the 1,000 people who will be randomly picked for a soundcheck opportunity.

The Bangkok leg of Love Yourself world tour is the ninth Asian stop of the boy group following its concerts in Seoul, Tokyo, Osaka, Taoyuan, Nagoya, Singapore, Fukuoka, and Hong Kong.

BTS kicked off its Love Yourself world tour in August 2018. Since then, RM, Jin, J-Hope, Suga, Jimin, V, and Jungkook have brought concerts to different parts of the globe including North America and Europe.

More dates and locations are expected to be announced.