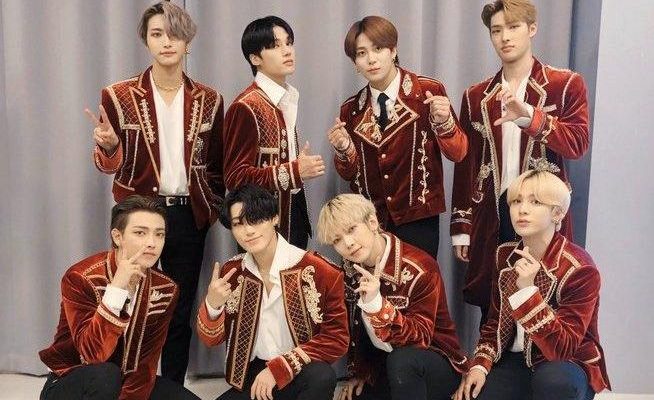 ATEEZ celebrated their 2nd anniversary since debut and their journey with ATINY thus far, during their digital concert ATEEZ 2ND ANNIVERSARY CONCERT: PORT OF CALL!

ATEEZ parted with their rookie years as they greeted their second anniversary on October 24. In celebration of the big day, the leading fourth-generation group hosted an online concert for fans, streamed exclusively through MyMusicTaste.

The event titled ATEEZ 2ND ANNIVERSARY CONCERT: PORT OF CALL, included a plethora of fan-favorite stages as well as intimate moments between the members and fans as they reminisced on the journey they have taken together so far.

The event marked yet another unforgettable milestone in the group’s career. Moreover, the concert was another testament to the incomparable bond that ATEEZ and ATINY have formed with one another.

ATEEZ began the concert by performing two powerful tracks that brought the energy levels up high, setting the tone for the rest of the event. The members came out in grand fashion with one of their most recent title tracks, “THANXX”.

They followed their opening performance with “GOOD LIL BOY” which was produced and written by Hongjoong with lyrical additions by Mingi.

The members then took the time to greet their loyal fans and promised a memorable time together.

After their energetic first stages, ATEEZ moved on to perform an intense round of fan-favorite songs. The members impressed fans with their stamina and consistent stage presence throughout this section of the setlist, performing many of their most tiring tracks.

This includes their debut song “PIRATE KING”, “HALA HALA”, “WIN” and “ANSWER”. Additionally, all stages captivated viewers with their strong portrayal and connection to ATEEZ’s pirate concept and worldview. 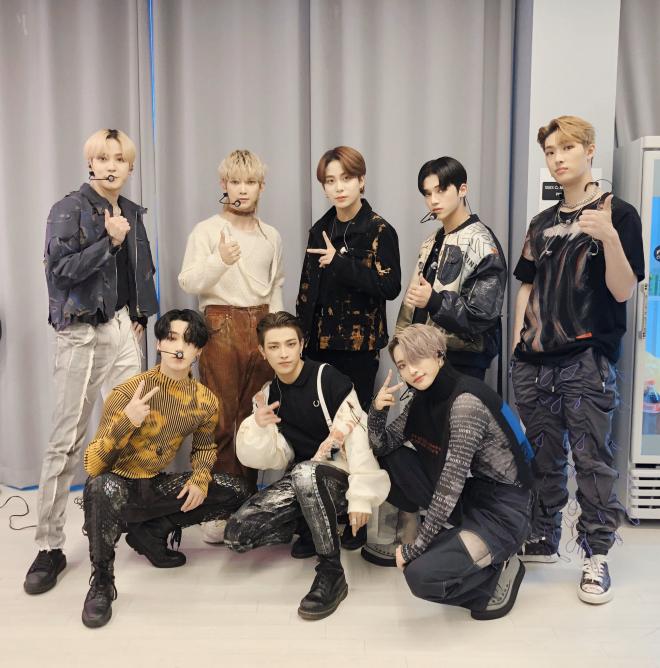 The next part of the event coined, “2020 PORT OF CALL AWARDS”, celebrated the members’ various charms by awarding members trophies based on categories that each member suited best.

Additionally, the following awards for the category of “Making A New Way”, celebrated the members’ recent work within ATEEZ. Jongho won the award for “Best Content” for the views on his OST covers on YouTube. Hongjoong won “Best Indulgence” for his excellent acting in ATEEZ’s “Diary Film”, while Yunho won the “Best Entertainer” award for his beloved MC-ing skills and mood-making positivity.

The awards were celebrated by the members in the hilarious, chaotic charm that made fans fall for ATEEZ even more. Mingi shed a few fake tears, while Seonghwa expressed his heart-felt gratitude in a joking speech of merely two words, “Thank you”.

A Trip To the Past

Following the cute ceremony, ATEEZ took ATINYs on a trip to the past by performing special dance stages. While the dances were usually reserved for tour stops or events such as KCON, the members excitedly announced they would perform the stages for the first time in Korea.

The medley included Travis Scott’s “SICKO MODE”, YG’s “One Time Comin'”, and “Pick It Up” by Famous Dex. The dances thrilled audiences and reminded long-time fans of the fun memories ATEEZ made with ATINY during their first world tour, The Expedition Tour during 2019.

ATEEZ wrapped up this segment of the concert with their beloved summer track, “WAVE”, which they released near the latter dates of their first world tour. 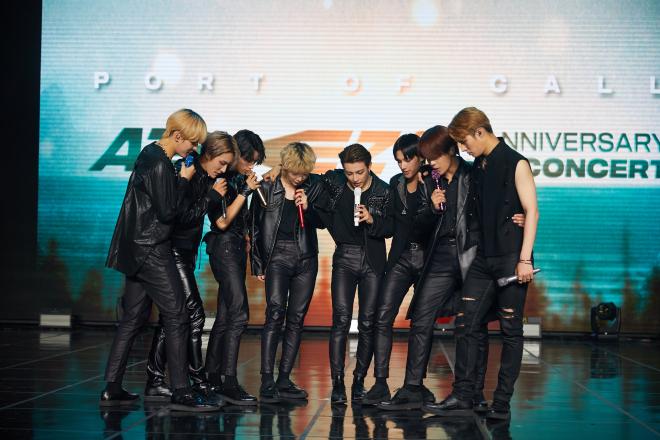 Succeeding the nostalgic part of the setlist, ATEEZ expressed their desire to show ATINY various sides of their music. To do so, the group treated fans to a rare performance of songs from their remix album, TREASURE EP. EXTRA: Shift The Map. This included, “Say My Name- Flavor of Latin with Juwon Park” and “Promise- Notation from Senor Juwon Park”.

In an additional surprise the featuring guitarist on the tracks, Juwon Park, joined ATEEZ on stage and performed with them.

A little more than halfway through the online concert, ATEEZ touched fans with a fan-dedicated part of the setlist. The group slowed the setlist down, straying from their powerful tracks to their more emotive songs, penned directly for their dear fans.

The members began with “Star 1117”, making fans even more misty-eyed by performing a piano rendition of the track. Subsequently, ATEEZ performed the soothing, “WITH U”. 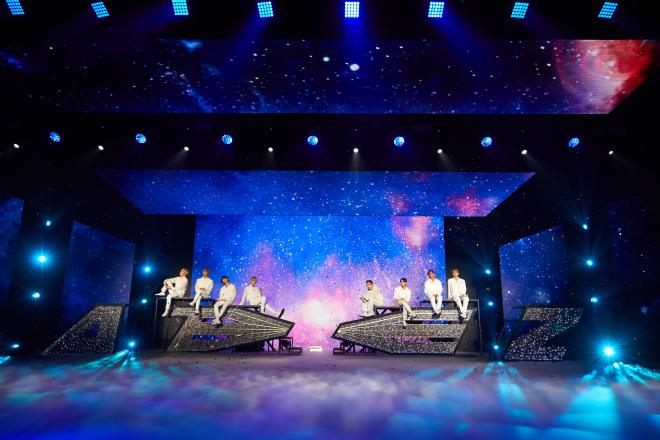 Moreover, for the first time ever, the group performed the Japanese track “BETTER” from their album TREASURE EP. Map To Answer. Hailed as one of ATEEZ’s most comforting tracks, the group paired the song with a never-before-seen contemporary-inspired choreography.

In true ATEEZ fashion, the group displayed their immense duality. From the fan-dedicated tracks that had many viewers holding back tears, ATEEZ moved into Halloween-themed stages. As their anniversary occurs right before Halloween, the group often celebrates the holiday festivities with fans and this year was no different.

In a nod to their legendary cover of TURBO’s “Black Cat” on Immortal Songs, the group performed the track once more. This time, donning even more intense stage makeup and creepy-colored contacts, the members evoked villainous energy to perform the song.

The group continued the ominous aura of the stage, transitioning to their track “WONDERLAND”. Depicting their unmatched stage expressions, the group delivered their terrifying Halloween rendition impeccably.

Bringing an end to festivities, ATEEZ performed “INCEPTION”, wearing the same outfits from their Seoul concert earlier this year.

Following the stage, the members sat down and read heartfelt letters written from fans, collected at their last anniversary concert, ATEEZ 1st Anniversary MOON RIVER. As tears were shed from members and fans alike, ATEEZ shared the sweet words shared by fans who wished them all the best in the second year of their careers. 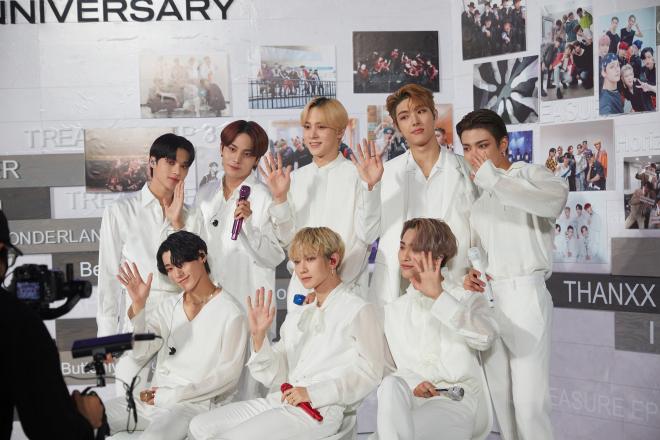 Many ATINY shared similar sentiments; that ATEEZ became their comfort and home. In return, ATEEZ thanked fans for their support and hoped that their mere existence could help ATINY. Additionally, the members expressed their frustration that they could not meet ATINY during the pandemic but promised they would remain a strong support to fans and always send their love to them.

To end the concert, ATEEZ performed, “One Day At A Time”, in which the members croon about their unending support for fans during tough times. The comforting song was an apt finale to the event, which at its core, was not only a celebration of ATEEZ’s anniversary but of the journey the members experienced so far with ATINYs by their side. 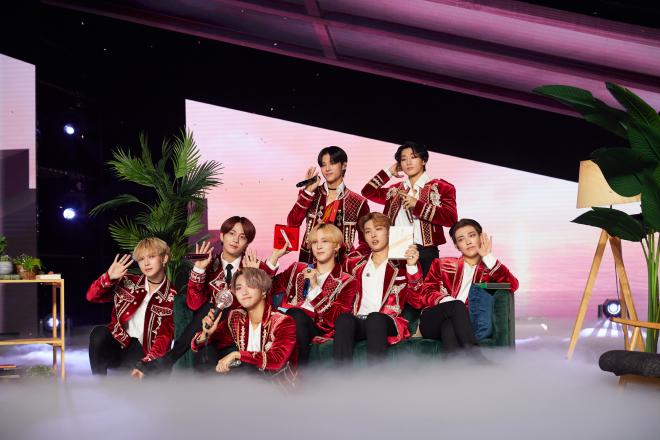 Meanwhile, fans can re-watch the event by purchasing the concert VOD, available on MyMusicTaste.

Hellokpop extends gratitude to MyMusicTaste for the complimentary ticket to the event.

Event Covered By: Kirsten for Hellokpop