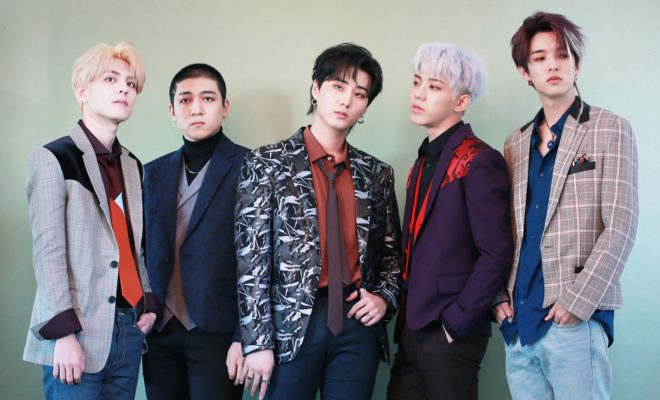 From Seoul To Madrid: DAY6 To Pull Everyone Into Its Live Music Through “Gravity” World Tour

My Days worldwide, the dates are finally out for the global tour of Day6!

Get ready to sink deeper into the charms of Day6 this 2019 as the boys bring their jaw-dropping and spectacular live performances to various cities all over the world starting in August this year.

Sungjin, Jae, Young K, Wonpil, and Dowoon will greet My Days worldwide with their second world tour titled Gravity which will kick off in Seoul in August.

Meanwhile, general ticket sale will start on July 12 at 8 p.m. KST. Ticket purchase can be made through Yes24. 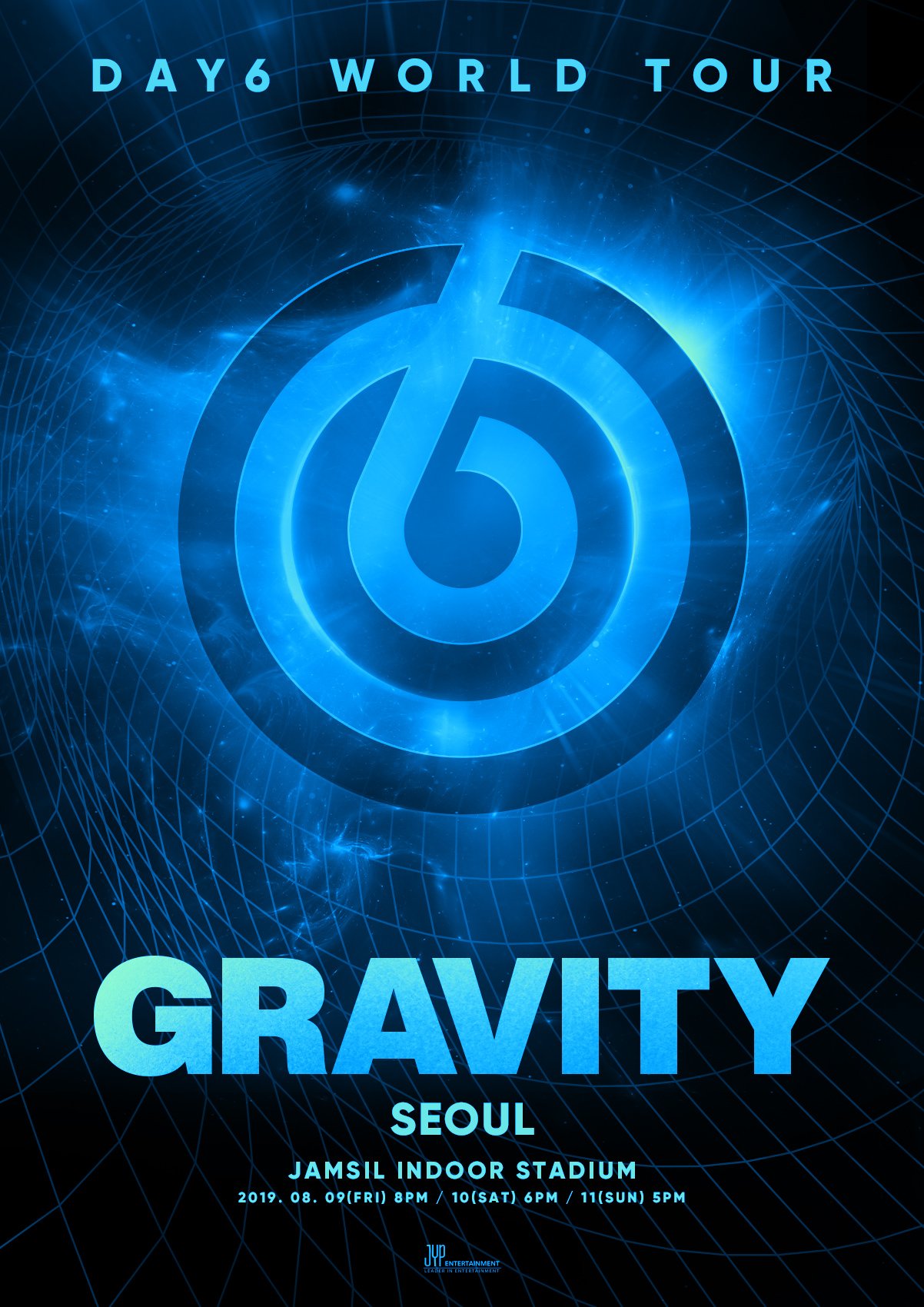 Following Seoul, the boys will then stage spectacular concerts in Daegu and Busan on August 24 and September 7 and 8, respectively.

The band will hold its first overseas concert for the Gravity world tour in New York from September 12 to 13. Then, the boys will meet My Days in Miami, Dallas, Chicago, and San Francisco on September 18, 20, 22, and 25, respectively, before ending the North American leg of the world tour in Los Angeles on September 28 and 29.

Singapore will serve as the lone stop of Day6 in October with a concert happening on the 5th of the month. In November and December, Sungjin, Jae, Young K, Wonpil, and Dowoon will make the month of My Days in Australia and other Asian cities extra fun. The boys will hold concerts in Melbourne and Sydney on November 15 and 17, respectively.

Meanwhile, Manila fans will welcome Day6 back into their land on November 23. The band will then end November with My Days in Jakarta through a concert on the 30th. On December 7, Bangkok will serve as the next city for Gravity world tour.

On the other hand, Europe fans of Day6 will have to wait until 2020 to see Sungjin, Jae, Young K, Wonpil, and Daewoon. Still, a jam-packed European leg of the world tour will fill the January of My Days in the region.

The band will stage the first concert of the European leg of Gravity world tour in Milan on January 8, 2020. Paris will follow on the 10th with London coming next on the 12th.

Amsterdam will serve as the venue for the boys’ concert on January 16, 2020. Meanwhile, Berlin, Brussels, and Warsaw will welcome them on the 18th, 22nd, and 24th.

Then, on the last week of January, Day6 will see My Days in Moscow on the 26th and Lisbon on the 29th. Madrid will then serve as the final stop of Gravity world tour through a superb concert on the 31st. 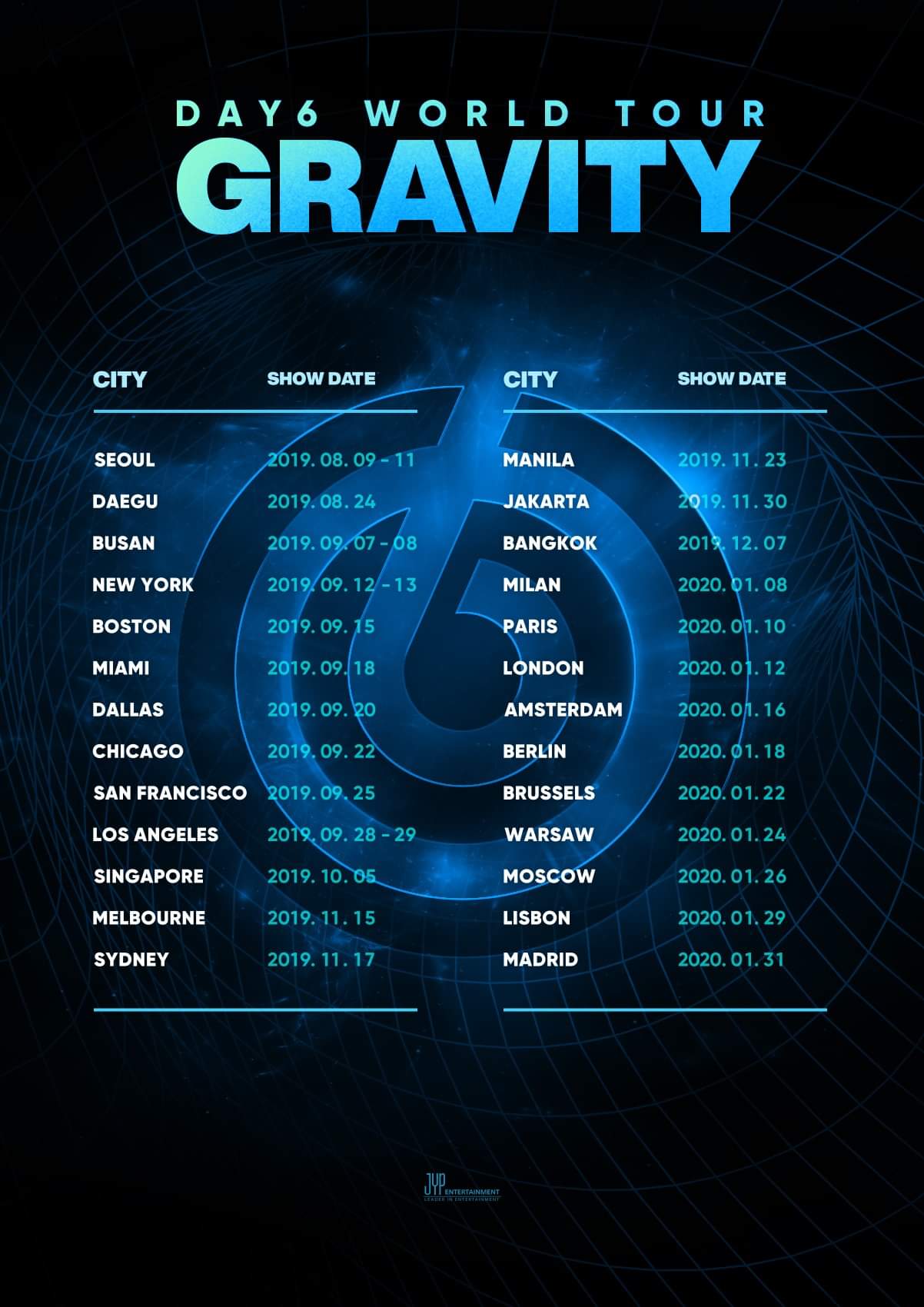 Aside from a world tour, Day6 will also treat My Days with its first comeback this 2019. The boys will release a new mini album titled The Book of Us: Gravity — its fifth to date — will come out on July 15.

Read: Day6 Sets To Open Another Chapter With Comeback And World Tour Announcement

The Book of Us: Gravity will be released in two versions namely Soul and Mate. Each album will consist of one CD, an 80-page photo book, two random photo cards, one post card, one bookmark, and one film photo card.

Pre-order is now available via Synnara, Yes24, and Hottracks. More details regarding the mini album, especially its track list, will be unveiled soon.

Anticipation is high for the upcoming activities of Day6 with the mini album coming more than seven months since Remember Us: Youth Part 2, the boys’ fourth mini album.

Remember Us: Youth Part 2, released in December 2018, consists of seven tracks — eight in the physical version — with “days gone by” as the title track.