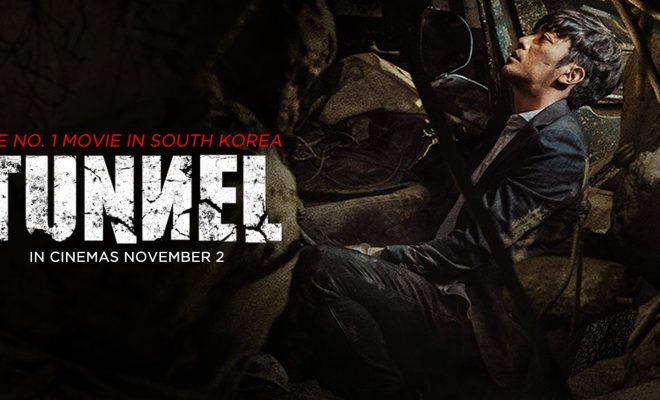 Filipino K-Movie Fans, Enter The ‘Tunnel’ If You Dare

After riding the ‘Train’, get ready to enter the ‘Tunnel’, Philippines!

Viva International Pictures is bringing the box-office hit to the archipelago, which scored $19 million and 2.58 million admissions on its first week, debuting on the top spot of South Korea’s box office.

The 2016 disaster film that headlines actors Ha Jung-woo, Doona Bae, and Oh Dal-su depicts 35 days of a father’s desperate quest for survival in a collapsed tunnel.

Devoted father, husband and automobile salesman Lee Jung-soo (Ha Jung-woo) is driving home, with a birthday cake for his daughter in hand. He enters the newly-constructed tunnel and from then, his nightmare begins.

The tunnel collapses on him. He survives, but is trapped and alone with only a birthday cake, two bottles of water and a cellphone. He calls 911 and his wife Se-hyun (Doona Bae), and is told to sit tight.

The 35 days of battle of survival and rescue has ensued for Jung-soo, his wife and task force leader Kim Dae-kyung (Oh Dal-su), while media exploits the situation with government officials stage-manage photo ops for their public image.

Partnered with visually compelling special effects and cinematography by director for photography Kim Tae-sung and editor Kim Chang-ju, director Kim Seung-hun delivers a heavy message on the sanctity of human life and probably, a critique on politics and the public.

Enter the ‘Tunnel’ in Philippine cinemas nationwide and be trapped in an engrossing, witty and enjoyable picture and story of disaster, survival and hope.