FORESTELLA is ready to greet Soopbyeols in North America in 2023!

FORESTELLA, a South Korean crossover vocal group, is set to embark on its first North American tour in 2023. 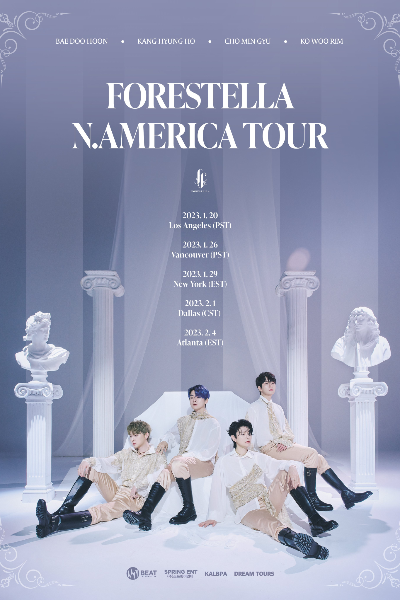 The tour is set to kick off on January 20 in Los Angeles before spanning three additional U.S. cities and one stop in Canada.

Venue details and ticketing information have yet to be released on FORESTELLA’s official SNS accounts. Please stay tuned for more details.

FORESTELLA is a Popera or crossover vocal group under Beat Interactive. The group first gained public recognition for their appearances on “Immortal Songs,” “Two Yoo Project,” and the All-Star edition of “Phantom Singer.” In 2021 the group won “Crossover Group Group of the Year” at the Brand of the Year Awards.

Consisting of Doohoon, Hyungho, Mingyu, and Woorim, FORESTELLA formed through the JTBC survival show “Phantom Singer.” Upon winning “Phamton Singer 2,” FORESTELLA officially debuted on March 14, 2018, with the album Evolution. Since its debut, the group has released three studio albums and, most recently, the mini-album, The Beginning: World Tree.

The quartet is actively involved throughout the production and arrangement of their songs. The group’s sound is best described as leaning towards pop, however, regardless of the genre, FORESTELLA has effortlessly captured the hearts of fans and peers through their charismatic stage presence, well-defined vocal harmonies, and beautiful performances.