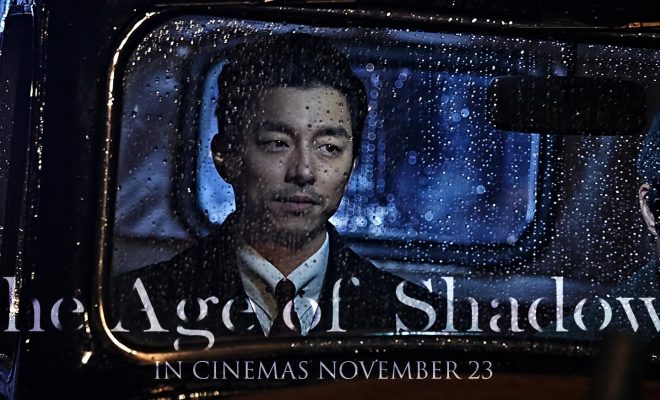 Korean actor Gong Yoo is set to make his return to Philippine cinemas on November 23 with his 2016 critically-acclaimed film, The Age of Shadows.

Director Kim Jee-won takes viewers back to Japanese occupation of Korea in the late 1920s through an action-packed and electrifying story of conflicts – both internal and external.

Korean police captain Lee Jung-chool (Song Kang-ho) was in the Japanese police force. He was ordered to track down and infiltrate the armed resistance fighting for Korean independence led by Kim Woo-jin (Gong Yoo). To gather information, Lee began to spend time with Kim, who runs a photography studio as a disguise to his underground activities.

Thus, the cloud of doubts began in Lee’s mind – the internal conflict of loyalty to his duty as a police officer and his sympathy for the resistance who fights for his country’s freedom.

With top-notch cast and production team led by Director Kim, The Age of Shadows is an epic tale of clashes between Korean freedom fighters and their Japanese colonizers, and of patriotism and self-interest.

Be lost in the darkness of South Korea’s entry for the Best Foreign Language Film at the 89th Academy Awards. Catch The Age of Shadows in Philippine cinemas nationwide beginning November 23.

Visit Viva International Pictures Facebook for more details on the screening of The Age of Shadows.