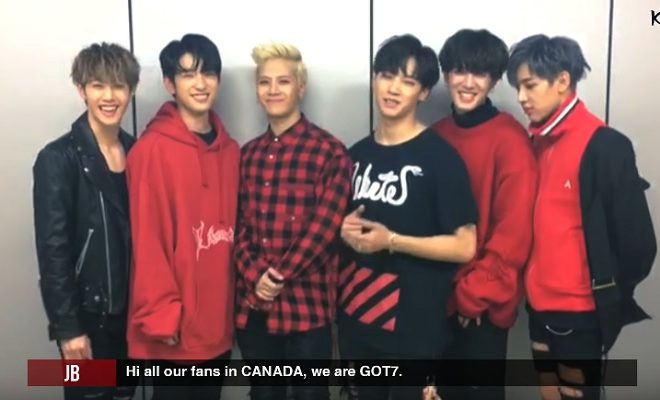 Canada fans asked for it and they have listened!

Organizer KME Productions is proud to present popular K-pop boy group GOT7 in ‘GOT7 Canada Fan Meet 2016’, taking place this November in Vancouver and Toronto, Canada.

GOT7 is a multinational group consisting of members from South Korea, Hong Kong, Thailand, and the United States. Members JB, Mark, Jinyoung, Jackson, BamBam, Youngjae, and Yugyeom made a name for themselves due to their powerful vocals, charismatic rap, and other talents.

With five mini albums, one Korean studio album and one Japanese studio album under their belts, GOT7 has a growing number of chart-toppers.

Following two Japanese tours in 2014 and 2016, GOT7 embarked on its first world tour, titled ‘GOT7 1st Concert Fly’, from April to August this year.

The boys met fans from all across Asia and North America in 13 different cities, such as Seoul, New York, L.A., Tokyo, and Bangkok.

Now with a scheduled comeback in fall of 2016, GOT7 is ready to meet even more fans across the world.

Promoted by KME Productions, GOT7 will be making stops in two Canadian cities for ‘GOT7 Canada Fan Meet 2016’.

Fans will have the chance to see their idols in person on November 11 in Vancouver at The Queen Elizabeth Theatre and on November 13 in Toronto at Massey Hall.

GOT7 will be holding two fan meetings on each of the aforementioned dates at 3pm and 8pm.

Tickets are still on sale and can be purchased at kpopme.com.

48
SHARES
FacebookTwitter
SubscribeGoogleWhatsappPinterestDiggRedditStumbleuponVkWeiboPocketTumblrMailMeneameOdnoklassniki
Related ItemsCanadaGOT7TorontoVancouver
← Previous Story Top Producer On CL’s North America Tour: “She Will Become An Artist That Everyone In The US Will Recognize”
Next Story → JYP Entertainment To Hold Acting Audition