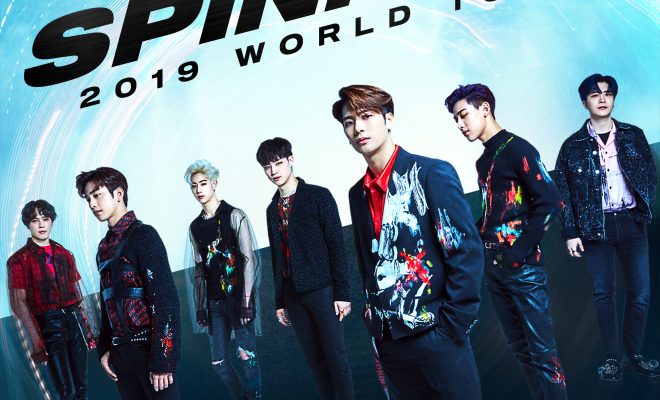 Prepare for a sweet spin in a stage full of love loops at GOT7 2019 WORLD TOUR ‘KEEP SPINNING’ in Manila!

All set to confess love through their music, GOT7 promises not letting go of their fans without satiating them with a night full of superb performances. The multi-awarded K-Pop boy group eyes to satisfy the hearts of Filipino Ahgases with the eagerly-anticipated tour. 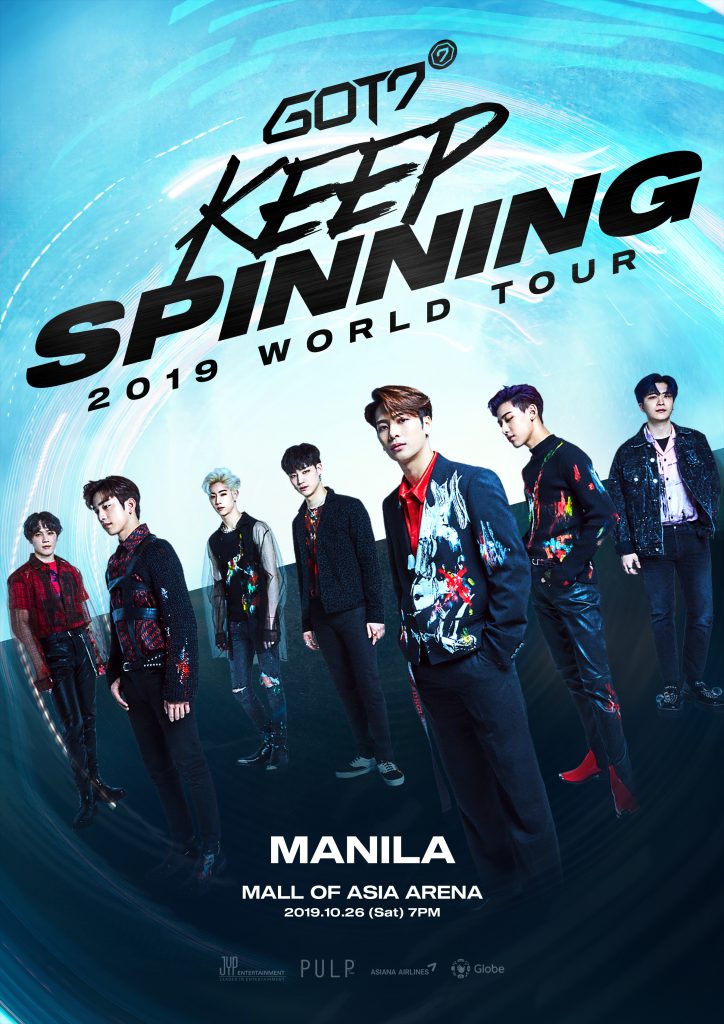 Proudly brought to fans by PULP Live World, GOT7 “Keep Spinning” in Manila will be held on October 26, 7PM at the Mall of Asia Arena.

Ticket Price Tiers are as follows:

VIP Seated ticket-holders can get a chance to win soundcheck pass and special show ID with lanyard through a raffle draw. Meanwhile, Standing A, B, C, D ticket owners will get a special show ID and lanyard. 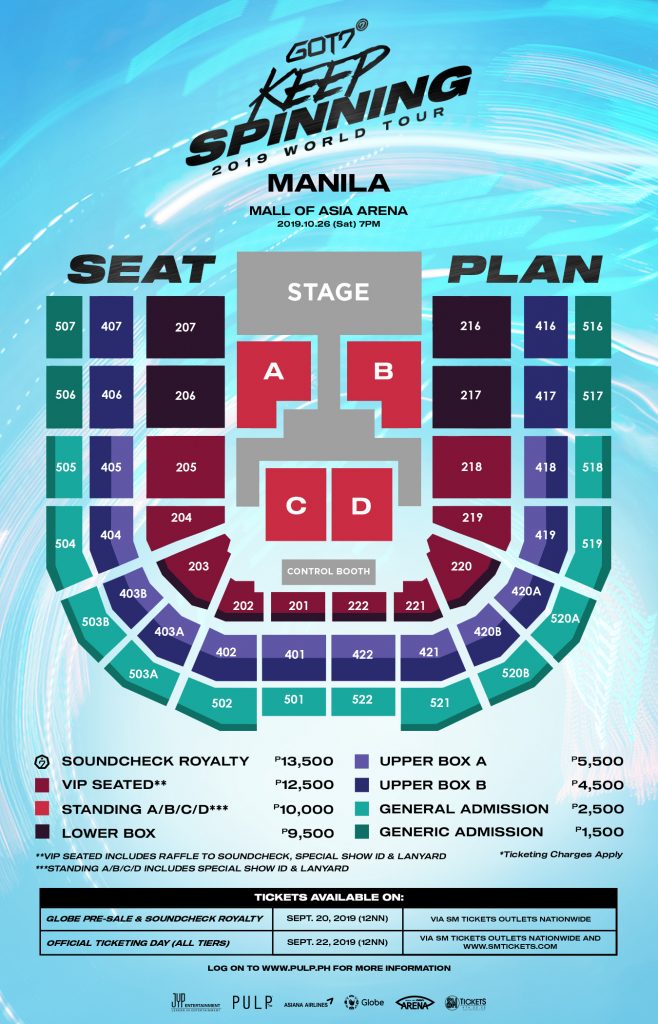 As the Manila stop draws nearer, look back on some of the music milestones of JB, Mark, Jackson, Jinyoung, Youngjae, BamBam and Yugyeom in the last five years.

They GOT us at HELLO

Bringing in their swag, GOT7 dropped their first album Got It? in 2014. Their first outing secured the top spot of Billboard’s World Albums Chart, as well as, 2nd spot of Gaon Album Chart. Showing off a top-class groove even for a rookie group, they kickstart their hip-hop colors in a clasping strike. Throwing the angsty cool lines on “Girls Girls Girls”, “I Like You” and “Follow Me”; the rest of their songs represent their confidence to enter the thriving Korean music scene.

That same year, the Billboard chart-toppers continue their success streak with second extended play, Got Love.  It ranked 1st on Gaon’s Weekly Album Chart and 3rd on the monthly chart and also charted on Billboard’s World Albums Chart at 6th place. Carrying the relatively bright and smooth character of the album, the catchy rhythm of “A” plays in your mind like a happy melody. At the same time, “Forever Young” haunts your reverie with its cadence.

There’s No Stopping GOT7

Owning their rookie year with a blast, the group unleashed their first studio album, Identify. Comprised of 11 tracks with lead single “Stop Stop It”, the group carried on with their distinct hip-hop flair. It peaked at the top spot of weekly Gaon Album chart and placed 2nd on the monthly chart. Additionally, it ranked 6th on Billboard’s World Album Chart.

A mixture of solid and suave ripple of music, Identify seemingly wants to strengthen the patent flavor GOT7 will thread on along the way. The party vibe drawn by “Gimme”, “Take My Hand” and “Magnetic” is further highlighted by the intoxicating mood of “Stay”, “Moonlight” and “She’s A Monster”.

Blazing to a refreshing summer comeback in 2015 with their 3rd mini album, GOT7 released Just Right, with a title track of the same name. Relaxed and soothing, the album has elaborated the range of vocal and rap deviations the septet can extend to. That is specifically highlighted in tracks “Just Right”, “Before The Moon Rises” and “My Reaction” and “Back To Me”.

Breaking borders, they also conquered Japan with the release of their album, Love Train モリ↑ガッテヨ. Including 12 original Japanese songs, “Girls Girls Girls”, “A”, “Stop Stop It” and “Just Right” were also remade to its Japanese versions. Led by three singles – “Around the World”, “Love Train” and “Laugh Laugh Laugh” released between 2014 and 2015, GOT7’s first Japanese full-length album was released in February 2016.

Achieving their second Billboard chart-topper, GOT7’s 4th extended play also marked their second No. 1 win on Gaon Weekly Album Chart. The addictive pulse of “If You Do” is such a sweet earworm while “Good” invites a happy vibe.

Picking up the momentum, GOT7 released its second studio album Flight Log: Disturbance in 2016. Aside from topping the weekly Gaon Music Charts and Billboard’s World Album Chart, it also ranked 7th and 6th on US and New Zealand’s Heatseekers Albums. The album also marked the group’s first disc bonsang award presented by Gaon Music Awards.

Following the first part of the Flight Log series, Disturbance emits the energy of their signature roar and raps apparent in the earlier albums. With sleek lines cutting through in songs “Hard Carry” and “Boom Boom Boom”, it blended well to the splendid lyric and music arrangements of “Prove It” and “May Day”. Adding to that, the lively flow of “HEY” and “Who’s That?” and soft soothing lines of “If”, “Sick” and “Let Me” make the album a jam-packed treat for any music lover.

Capping off the busy year, they released their 2nd Japanese album Hey Yah in November 2016. Locking in the last part of the trilogy, Flight Log: Arrival accomplished the same feats of its predecessors. Alternating with rip-roaring songs like “Never Ever” and “Go Higher”, as opposed to ear-pleasing sound of “Q” and “I Don’t Care”; GOT7 completes its unique album project with resonating music that was unafraid to explore boundaries.

Notching the group’s seventh chart-topping album on Gaon Music Charts, 7 for 7, the 6th Korean extended play also landed first place on China’s V Chart. It was also relaunched for a repackaged album in December 2017 from its original release the same year.

Featuring seven songs, the members have actively participated in the creation of the album. Staying true to their  smooth verses to chorus transitions, “You Are”, “Face” and the rest of the songs pull an enchanting aftermath when listened to.

In the succeeding month, they released their 2nd Japanese mini album Turn Up, peaking at 3rd spot on Oricon Weekly Chart and 2nd place on Japan’s Hot 100 Album chart.

Consistent and collected, GOT7 means business in creating music each year that will show their growth as artists. The year 2018 marks numerous achievements for the group with two platinum albums certified by Korean Music Content Association (KMCA).

Eyes on You released in March 2018 peaked at the 1st spot of Gaon as usual. Additionally, it also ranked 2nd on Billboard World Album and Heatseeker’s Album charts. It also entered music charts in the United Kingdom, New Zealand and France.

Meanwhile, Present: You & Me, is truly a gift carefully conceived highlighting the group’s ever-growing thirst to prove they can do more. Composed of five tracks, with lead single “Lullaby” having four language versions, all members also get a spotlight turn with seven equally amazing solo songs. Showing off brilliance with their harmony, “No One Else” and “I Am Me” are album picks that easily attracts attention.

GOT7 became the first K-Pop group to perform in the renowned Barclays Center Arena in Brooklyn, NYC and sell out its 19,000 seats. They have also performed in the highly-rated show Good Day New York and successfully cultivated a fan-base in the western market.

Confident to expand their music, the third Japanese mini album I Won’t Let You Go finally scored the first Oricon Album and Hot 100 No. 1 for GOT7 in early February 2019. Thereafter, Love Loop, the group’s fourth Japanese EP ranked 15th on US Billboard’s World Chart.

Even with all these triumphs, GOT7 still remain connected to their fans as they strive to make music that has substance—music that speaks about what each member conceives. Nothing can stop their flight to success as they go on honing their craft, which they dedicate to all IGOT7s.

Bringing their swag and mighty performances back to the Philippines, GOT7 will surely keep every Filipino IGOT7 thrilled! Brace yourselves for this explosive night brought to you by JYP Entertainment and PULP Live World.

We need your support! If you have enjoyed our work, consider to support us with a one-time or recurring donation from as low as US$5 to keep our site going! Donate securely below via Stripe, Paypal, Apple Pay or Google Wallet.
FacebookTwitter
SubscribeGoogleWhatsappPinterestDiggRedditStumbleuponVkWeiboPocketTumblrMailMeneameOdnoklassniki
Related ItemsGOT7GOT7 Keep Spinning In MNLGOT7 Keep Spinning World Tour
← Previous Story “StarHub Night Of Stars 2019” To Feature Sung Hoon As First Runner Of Meet & Greet Series
Next Story → 5 Interviews That Prove Jung Hae In Has A Good Head On His Shoulders