The Grand Mint Festival 2020 unveils the official lineup of artists and musicians that will perform in the show.

South Korea’s fall music festival Grand Mint Festival 2020 (GMF2020) launched the much-awaited lineup of artists. The event will take place at the Olympic Park in Seoul on October 24 and 25 (Saturday and Sunday).

Peppertones will be appearing on the first day of GMF 2020. On top of that, GMF’s favorite artists such as 10CM, The Solutions, as well as several artists who have given constant trust to GMF will also perform their amazing hits.

In addition, Jeong Eun Ji, who had her first official festival stage through the last GMF 2019, will be attending the event for the second consecutive year.

Likewise, YOUNHA will sing a special set of songs that were not played in last year’s event. Reigning as one of the most influential and well-known Indie pop artists, Bolbbalgan4 also confirms her appearance in the music event.

The talented musicians such as guitarist and singer-songwriter zai.ro, producer and vocalist Colde prep to show stunning performances only at the Grand Mint Festival 2020. HYNN (Park Hye Won), one of the most notable vocalists today, will be serenading fans at the GMF 2020.

Soloist Stella Jang who recently performed as a solo artist and a member from a project group called CHEESeoViChi is also included in the artists’ lineup.

Jukjae, one of the best guitarists today, has confirmed his appearance. The artist recently played touching music through jTBC’s Begin Again. One of the best and most famous balladeers Jung Seung Hwan will also decks to parade his best ballad hits at the said event. 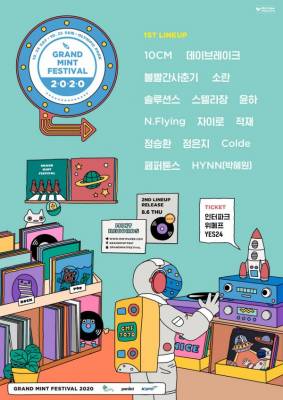 Park Won readies to showcase his autumn voice with consistent stage presence once again at the GMF 2020. Singer-songwriter Isaac Hong who starred in the musical film, “The Days We Meet Again”, will also be present at the said event.

Adding freshness to the exciting lineup, hip-hop/content crew Balming Tiger will be performing their unique discography.

In addition, Starship Entertainment’s ballad duo MIND U (former Acourve) will delicately express moments of love as one of the event performers.

Singer-songwriter Jeong Se Woon will serenade fans with his sweet music hits on the second day of the event. The artist recently released his first full-length album and is widely loved through various broadcasting activities. 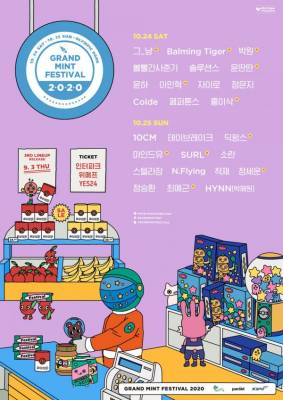 The music festival also sets to launch a new program called The Moment of You. It specifically highlights artists who have not been seen at music festivals for various reasons and invites them to the Grand Mint Festival stage. The program will focus on special moments of artists regardless of their genres or careers.

Particularly, the music event features the artist lineup from the festival Beautiful Mint Life which was canceled in May due to COVID-19. It also includes a large number of selected artists from the Korea Creative Content Agency’s music project, Muse On 2020.

The Grand Mint Festival 2020 will announce its third lineup on September 3 along with coronavirus measures.