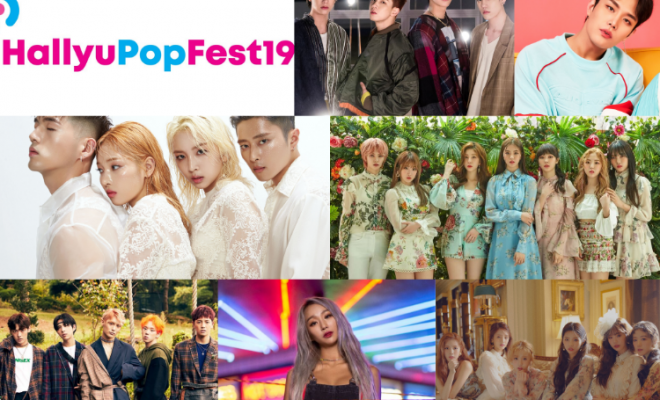 K-Pop aficionados get an exciting weekend treat at the HallyuPopFest 2019.

For its second year, HallyuPopFest makes every K-pop followers wishes come true. On May 25 to 26, fans will meet 15 talented Korean idols at the Singapore Indoor Stadium. 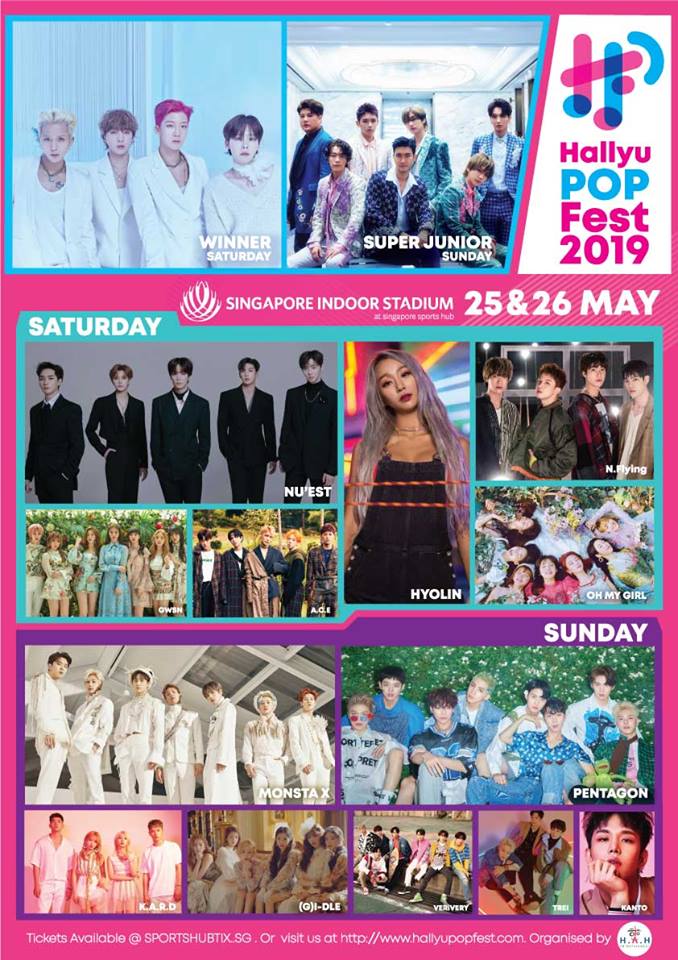 Furthermore, this year’s event will highlight a mixture of music genres from their featured artistes.

Let’s get to know the different kinds of music awaiting for us to hear.

Catch them on May 25 Showcase.

The enigmatic boys of MONSTA X will be taking Singapore by storm with intoxicating parade of talents.

They will shoot out fiery performances of their music on May 26 Evening Concert.

The Pledis boys have come along way since their debut music video “Face”. More than their visuals, their upbeat tempo and avante-garde sound are their claim to fame.

NU’EST will make everyone dance on May 25 Evening Concert.

The nine-member boy group totally sparkled with their track “Shine” which garnered 142 Million views in YouTube.

Watch them strut their music on May 26 Evening Showcase.

Who wouldn’t groove with Winner’s refreshing songs? Their tracks are moodmakers and make you really pumped up with its groove.

See Jinwoo, Seunghoon, Mino and Seungyoon on May 25 at the Evening Concert.

The rookie boy group from Stone Entertainment gives off a distinct music recall with their track “Ring Ring Ring”.

Catch them on May 26 Showcase.

Kanto is part of the Hip Hop group, Troy. He also appeared in television shows like Show Me The Money and The Unit.

Watch him swag on May 26 Showcase

Their music reminds of the 90s sound. It’s soft, has modern hip hop beats and ballad-like.

They will showcase their vibe at the Afternoon Showcase on May 26.

Apart from K.A.R.D being a unique group with a mixed-gender combination, their music is also diverse. Enjoy their different beats on May 26 at the Evening Concert.

Just like their label-mates F.T. Island and CNBLUE, N.Flying will impress you with their band music, playing their own instruments on stage.

Look forward to how N.Flying rock your world on May 25 Evening Concert.

Dubbed as Korea’s Beyonce, Hyolyn will give you soulful performances at the Evening Concert on May 25.

Bubblegum mostly appeals to teenagers with their upbeat sounds, cutesy choreography and saccharine vocals. Most of the time there’s a fantasy-like sounds with dreamy style MVs. This music is also known as Sunshine Pop.

Here are the group that will melt you down with sweetness in the event.

Miya, Seokyoung, Seoryoung, Anne, Minju, Soso and Lena will brighten up your moods with their angelic looks and cutesy sound.

See them perform live at the Afternoon Showcase on May 25

Hyojung, Mimi, YooA, Seunghee, Jiho, Binnie and Arin will melt you with sweetness on May 26 Evening Concert.

Latin pop is an upbeat music inspired from Latin America. Here are some of the artists who will spice up the stage with their latin pop beats.

Miyeon,Minnie, Soojin, Soyeon, Yuqi, and Shuhua are your senyoritas of Latin Pop music.

They will showcase their sultry vibe on May 26 Evening Concert.

Super Junior have evolve their music since their debut. From Dance Pop, Electronic , R&B and now, Latin Pop.

See them in their alluring moves and music on May 26 at the Evening Concert.

FacebookTwitter
SubscribeGoogleWhatsappPinterestDiggRedditStumbleuponVkWeiboPocketTumblrMailMeneameOdnoklassniki
Related Items#HallyuPopFest2019A.C.E.G.W.S.NgiddleHyolynK.A.R.D.KantoKpopmonsta xN FlyingNU'ESToh my girlPentagonSuper JuniorTREIVERIVERYWinner
← Previous Story MONSTA X Reveals Which Image And Type Of Song They Would Like To Try Next As A Group
Next Story → Girls’ Generation’s Tiffany To Return To Seoul For A Solo Concert