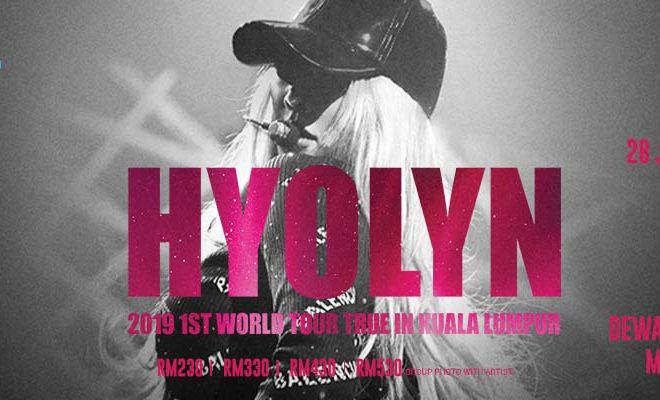 Malaysian Hyotties, are you ready for a hype stage with Hyolyn in June?

Pumped stages and scorching hot performances are ready to be unleashed by Hyolyn in June for her first full concert in Malaysia. 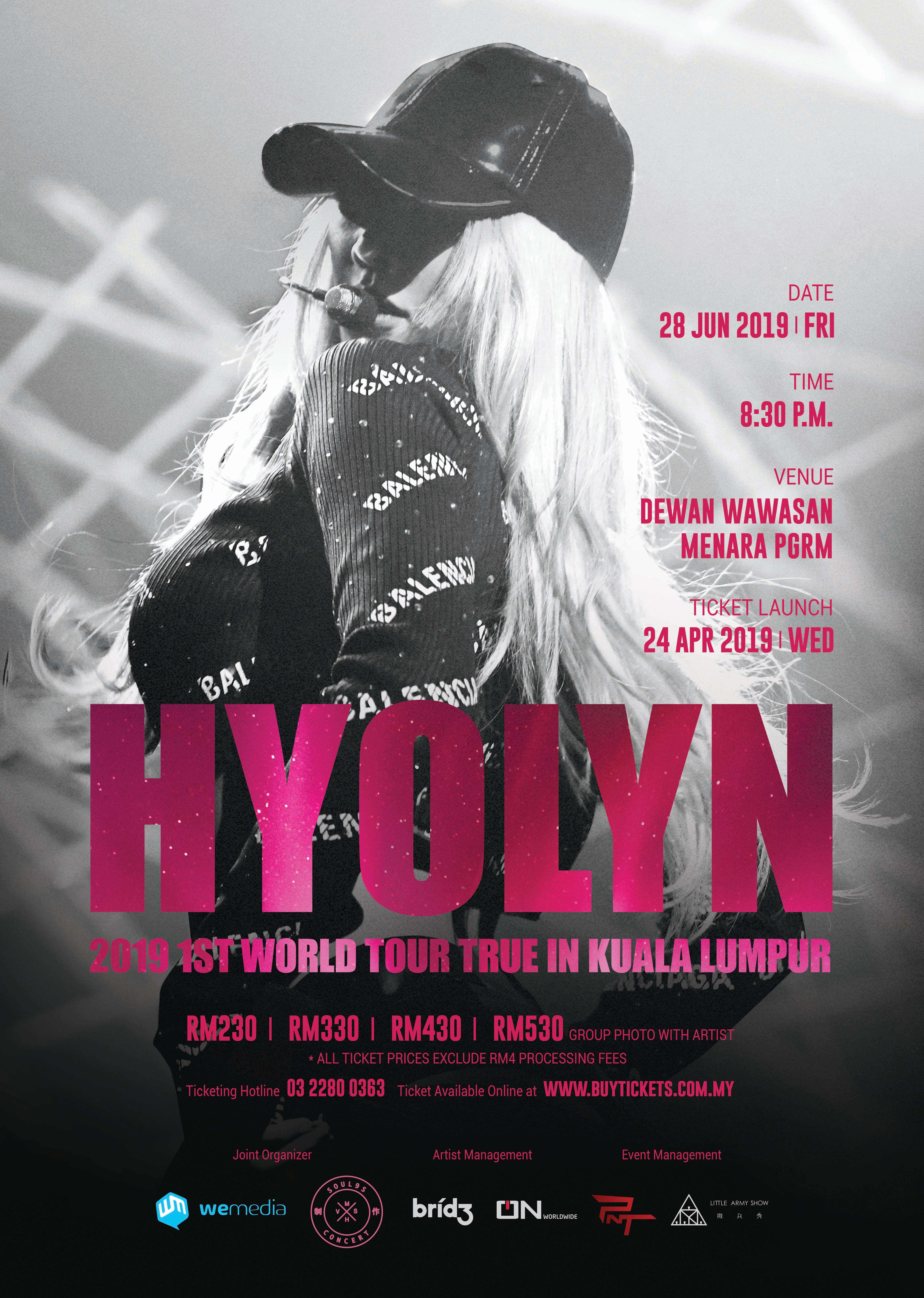 WeMedia and Soul9sProduction are proud to present the 2019 HYOLYN 1st World Tour [TRUE] in Kuala Lumpur. Happening on June 28, 8:30 PM at Dewan Wawasan Menara PGRM. Brace yourself for 16 explosive songs that Hyolyn has prepared for her loyal fans.

This year, Hyolyn will embark on her first ever world tour. She is set to see her fans in Berlin on May 29 and Amsterdam on May 31. On the following months, she will stop by Paris on June 2, Madrid on June 5, Taipei on June 22 and Tokyo on June 30. Furthermore, additional concert stops are to be announced.

In Addition, tickets will start to go on sale at 12 AM on April 24 via buytickets. 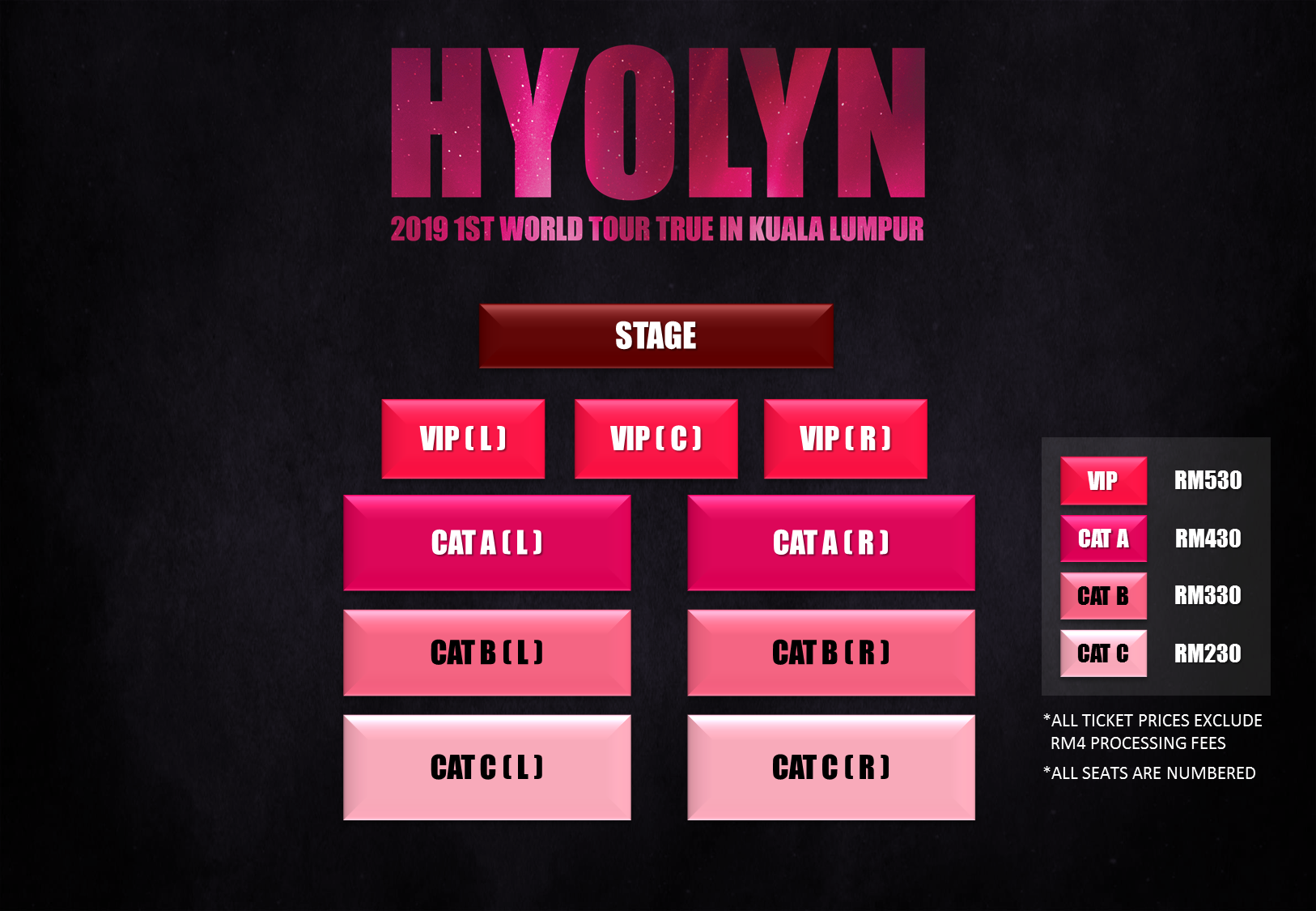 Also, Hyolyn has prepared Autographed Polaroid and Autographed Poster for fans. Aside from that, the talented singer will present a surprise event on stage, specially created by the singing diva herself. 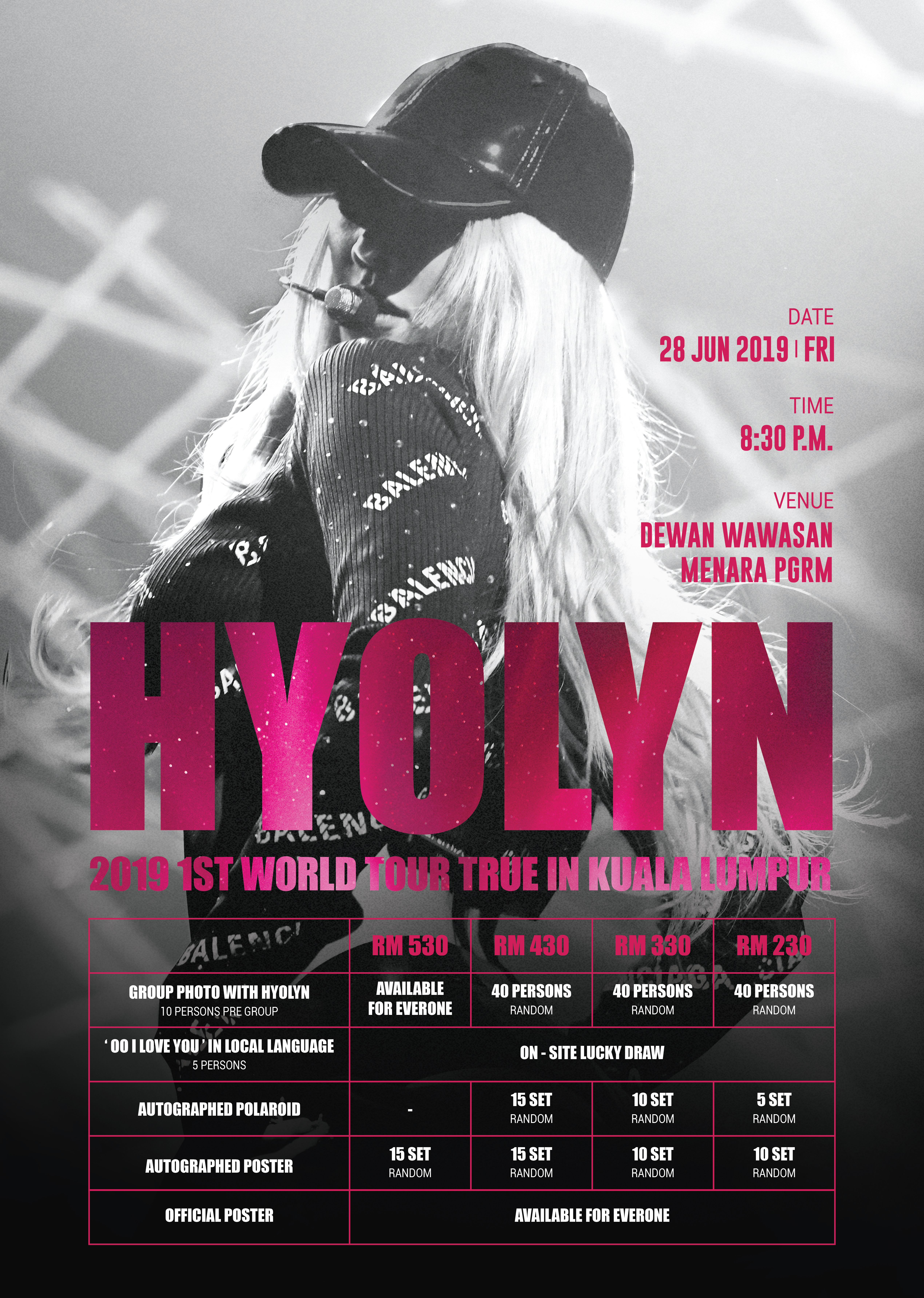 With her vocal prowess, sexy style, and healthy dark skin, Hyolyn has been dubbed Korea’s Beyonce. From the leader of the popular girl group Sistar to her becoming solo, she still maintains the love and support from her avid followers. 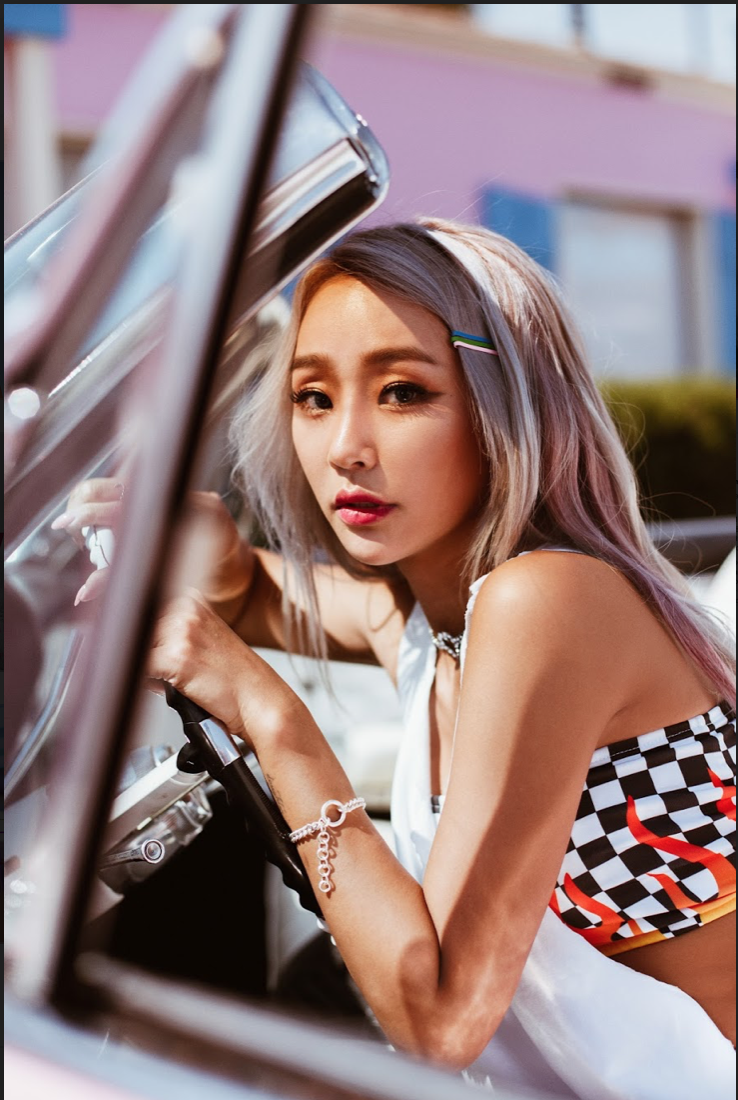 Not only that she has excellent singing skills, but she also proved her versatility in acting through the musical drama, Dream High 2. In the drama, she played the role of Nana, a famous idol from the made-up girl group Hershe.

As one of the valued Korean singers of her time, she had lent her voice in singing OSTs for a few famous dramas like “You Make Me Go Crazy” from Master’s Sun , “Goodbye” from My Love From The Star, and “Our Tears” from Hwarang: The Poet Warrior Youth.

On November 22, 2013, she had made a very momentous day in her life as she joined Hollywood legend, Stevie Wonder in “I Just Called to Say I Love You” at Korea’s biggest music award show – Mnet Asian Music Awards.

Read : HallyuPopFest 2019: Hyolyn Puts Singapore Baes On Her To Do List In May

On Forming Her Own Music Label.

After joining Bora, Soyou, and Dasom in Sistar for seven years, the group finally bid goodbye to their fans and followed their own paths. Shortly following her group disbandment, Hyolyn decided to leave Starship Entertainment and be independent. After a month, she formed her new agency titled Bridʒ.

Hyolyn hopes to build a connection between the public and all forms of music production, just how the bridge in a song connects to the song’s climax 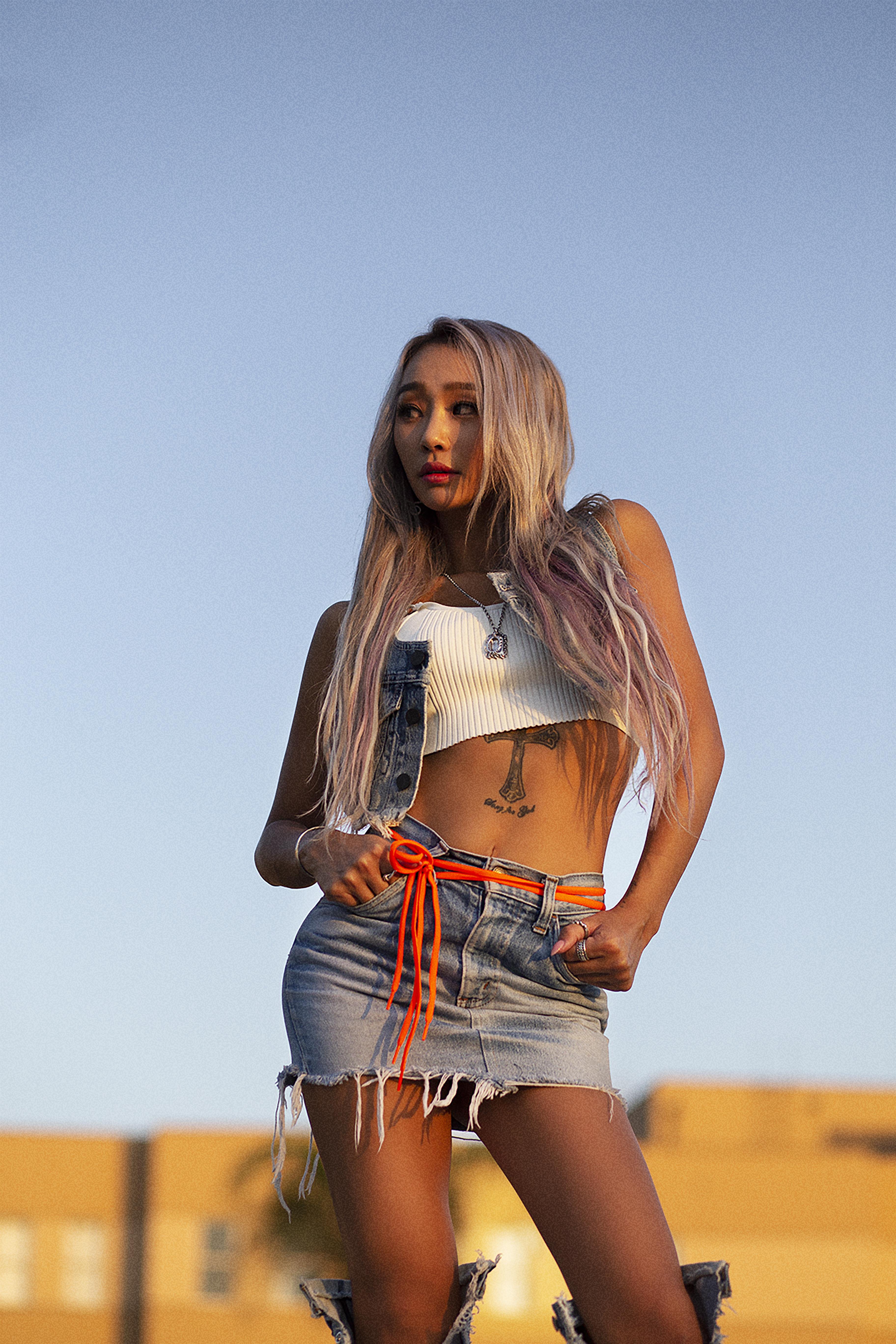 The 2019 HYOLYN 1st World Tour [TRUE] in Kuala Lumpur is brought to fans by WeMedia, Soul9sProduction, and Brid3 Entertainment.

For its worldwide release, PNT Solutions and Little Army Show are in charge of the tour.

For more information regarding the event, please visit the WeMediaMY official Facebook.

We need your support! If you have enjoyed our work, consider to support us with a one-time or recurring donation from as low as US$1 to keep our site going! Donate securely below via Stripe, Paypal, Apple Pay or Google Wallet.
FacebookTwitter
SubscribeGoogleWhatsappPinterestDiggRedditStumbleuponVkWeiboPocketTumblrMailMeneameOdnoklassniki
Related ItemsHyolynKpopkpop concert in KLSISTAR
← Previous Story BLACKPINK Stages Revolutionary Second Performance At Coachella
Next Story → BTS Makes History With Three No. 1 Albums On The Billboard Charts Within A Year