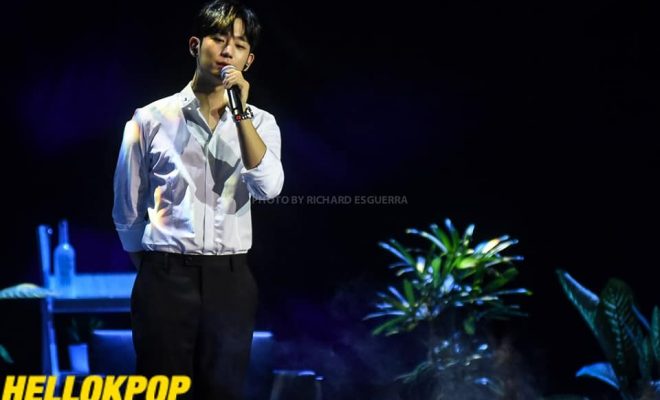 It was a night well-spent and full of memorable moments, that fans for sure will forever treasure.

Jung Hae In came prepared. As revealed during the fan meet, Jung was 100% involved in the planning and preparation. He took an active part in mapping out the entire evening and he had one thing in mind: he wanted his fans to feel the love. And that he accomplished. 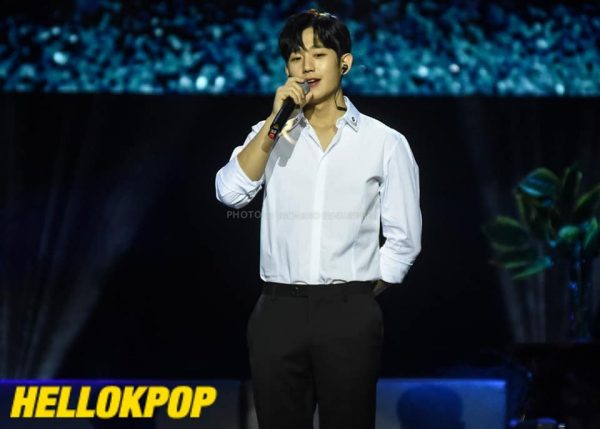 Emerging from the smoke, Jung walked on stage by himself. He stood in the middle of the stage and serenaded his fans for the first time that evening. His expression was sincere as he sang words of love much to the delight the crows. Furthermore, fans could not contain themselves as they squealed glee. After all, they’ve waited for this moment for months.

After the song was over, the host Sam Oh translated for the actor. According to her, Jung was shocked by the loud screams from his fans. Laughingly, Jung said that he realized that his Filipino fans are not shy at all.

Jung reminisces about how this was his second fan meet, and that he missed his fans very much. Additionally, Jung was amazed that he had fans from other countries who flew in just to see him. Repeatedly, Jung expressed his gratitude for the time and effort they made just to see him.

To give the actor a taste of Philippine hospitality, the host provided Jung with a welcome drink. A tall glass of calamansi juice was brought in for the actor. Sam Oh explained that calamansi is a local citrus fruit.

Jung did not hesitate in tasting the beverage and even proceeded to down the drink in one straight gulp. Jung expressed his surprise when he tasted the fruit juice, saying he expected a sour drink, but it’s actually sweeter than he thought. 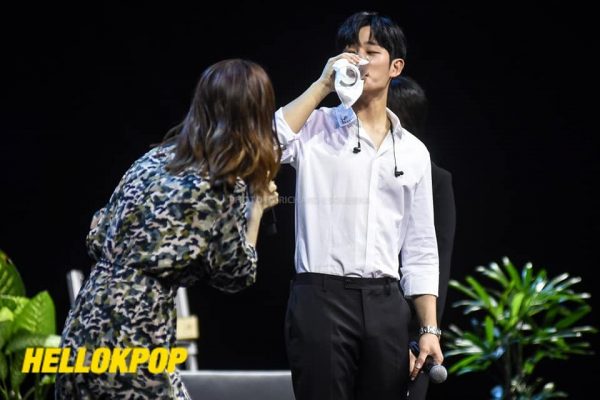 Up next, Jung explained that he had a great evening planned out for his fans and he hoped that the fans will enjoy the night.

In the next portion, Hae In’s Picks, photos of the actor flashed on the screen on stage. These were personal snapshots of the actor, taken especially for the fan meet.

Jung explained the behind the scenes stories of each picture. Pictures of Jung during his preparation for his upcoming Netflix movie Tune in For Love flashed onscreen. The actor provided his fans with a glimpse of how hardworking he is.

After his Netflix drama One Spring Night, he jumped right to filming Tune In For Love. Despite his busy schedule, he was very conscious of keeping healthy, which he adds that his fans should also not forget. 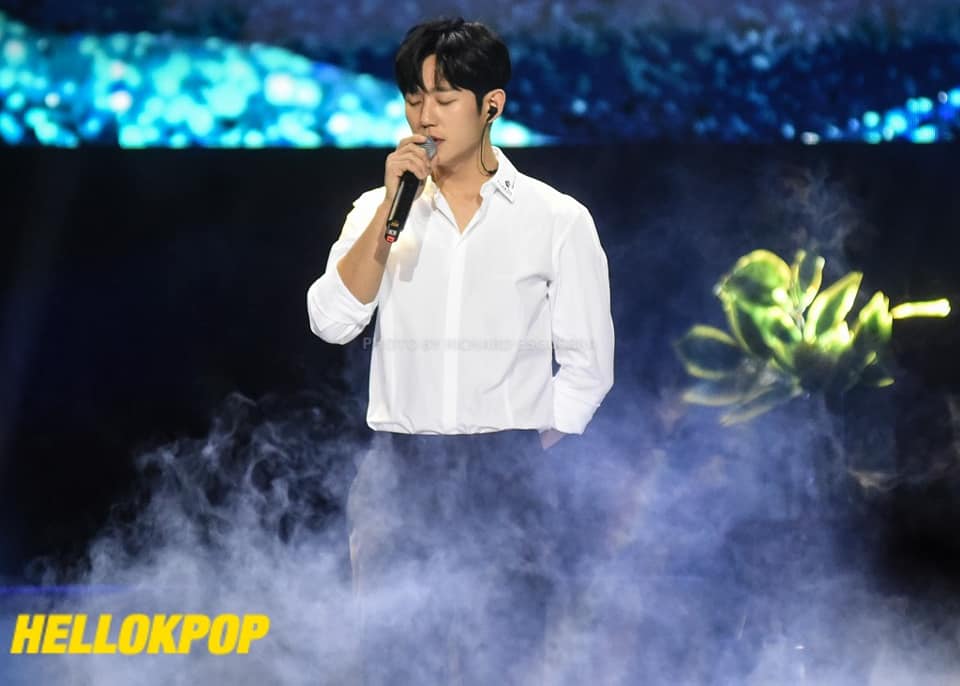 Diving even more personally into Jung’s private life, the host fired a series of intimate questions which the actor readily answered. Jung revealed that steak was his first meal in Manila.

Furthermore he revealed that during long flights he would either watch movies, catch up on TV shows, check scripts and even sleep. Additionally, Jung chose brushing his teeth instead of washing his feet or face.

Jung walked over to a board full of post-it notes next. These were notes from fans, asking Jung their own TMI questions.

Jung chose questions carefully and got ready to reveal even more about himself. The first question immediately threw him in a loop as he was asked how old he’d like to get married. 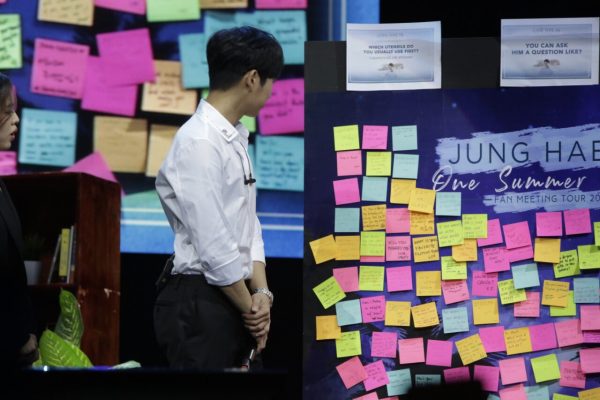 He revealed that he is currently 33 years old and he would like to get married before he turns 40. To the delight of his Filipino fans, he admitted that he had the local fast food the night before, and he enjoyed the peach mango pie for dessert.

The rest of the questions were quite specific and personal, like asking if he bit his straw (as a kid he did!) and if he plans to return to Manila. (yes! but hopefully as a leisure trip next time).

Jung further indulged his fans when he was asked to sing one of Paul Kim’s hits. He readily agreed and stood up immediately, launching in a short but sweet a capella rendition.

#JungHaeIn serenaded the crowd as he sang a few lines of Paul Kim’s “Me After You”.#JungHaeInMANILA2019 pic.twitter.com/8KxJImACry

The OX Quiz With Quizmaster Jung Hae In

In a process of elimination, a series of personal information about the handsome actor left his fans in a tizzy as they guessed which answer is correct. Jung himself answered the questions and then explained further. For example, he found San Miguel beer, a local beer brand, very delicious. 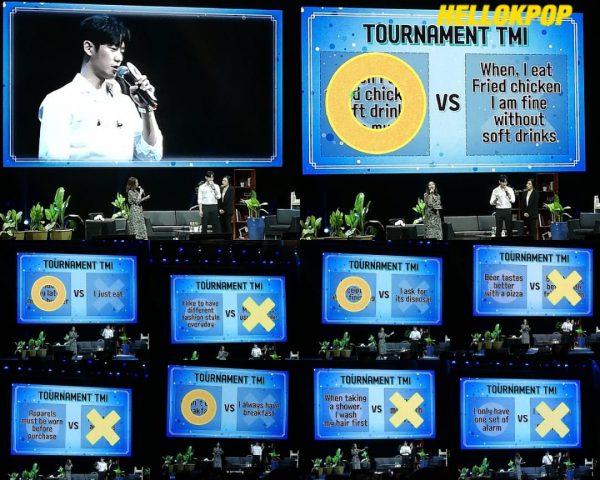 He even admitted that he had a few bottles the night before. He also thought that having fried chicken with beer is absolutely necessary. Jung continued to play the game with fans until the final three fans were chosen. This concluded the first part of the fan meet, which Jung ended with another song entitled “Where the Wind Blows.”

Jung Hae In, the Pharmacist is In

Perhaps one of the most touching parts of the program was when Jung played the role of a pharmacist. Reminiscent of his recent role in

One Spring Night, Jung instead dispensed advice to various problems of his fans. In addition, he prescribed small tokens that he felt the fans needed, an added bonus was that he prepared these himself!

Jung took this opportunity to provide wisdom to his fans through this portion. His first fan talked about being at a crossroads at 22 years old.

The actor told her that it’s natural to be concerned about the future at this age. He encouraged her to not feel bad but rather look at what interests her or what she enjoys.

With this, he suggested that it might be something that she can look into, or a path she can also take. He also admitted that at that age, he was in the military.

Back then, Jung said that he had the exact same thoughts as the fan. As his prescription, he gifted her with a journal where she can write down her thoughts. 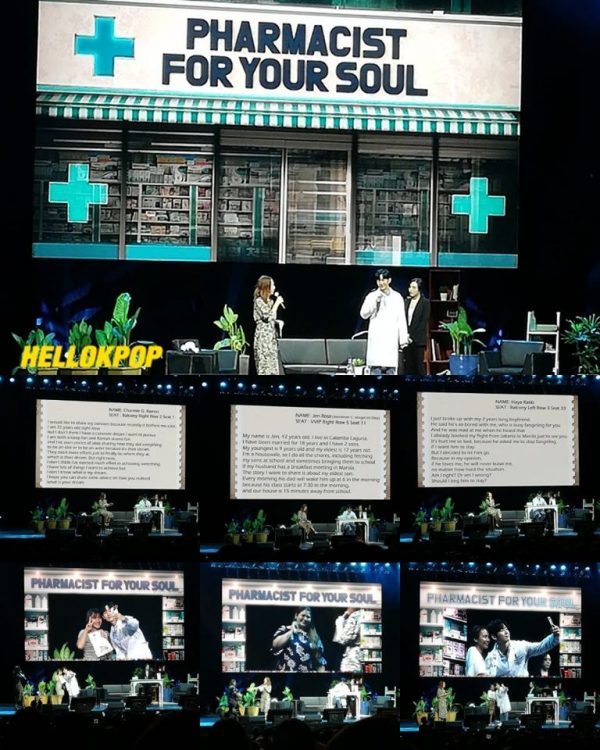 One of Jung’s best advice was when he told a fan to love herself first. The fan broke up with her boyfriend because she was a big fan of Jung Hae In and chose him over her boyfriend. To this, Jung was shocked, and was unable to answer.

He started off by apologizing to her ex boyfriend. But then he praised her for making a stand and that she should definitely love herself first. It’s notable that the fan flew in from Indonesia just to see the actor. Luckily for her, she received a prescription from Jung and even a selfie.

This was actually something that Jung repeatedly said throughout the night. He kept telling his fans to love themselves first because then it will be easy for them to love the people around them.

Before the fan meet ended, Jung had even more chances to give away prizes to his lucky fans. Jung was very game and meticulously participated in each game, but he also gave up easily for the sake of his fans. 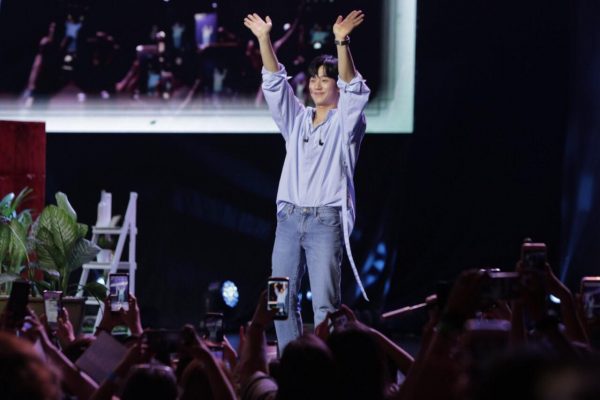 The fan meet was long, but still too short for fans who couldn’t get enough of the handsome and thoughtful actor. It was evident how much Jung prepared for the evening.

His sincere heart shone through the entire night, and his actions told of how grateful he is for the love he has been receiving.

As the fan meet was coming to an end, Jung Hae In said, “Love Yourself First So You Can Love Others”. A fitting message from the actor who has showered us with characters who knows just how to love and be loved.

If there was one actor that I personally am a fan of, it’s Jung Hae In. He’s hardworking and he has a genuine love for the fans who love him right back. Mission accomplished, it was indeed a very unforgettable night. Thank you!

READ: Jung Hae In Talks About Characters He Portrayed At #JungHaeInMANILA2019 Press Conference

2019 Jung Hae In ‘One Summer Night’ in Manila is brought to fans by Wilbros Live, FNC Entertainment and Maxperience.

Hellokpop extends gratitude to Wilbros Live for the media passes for the press conference and fan meet.