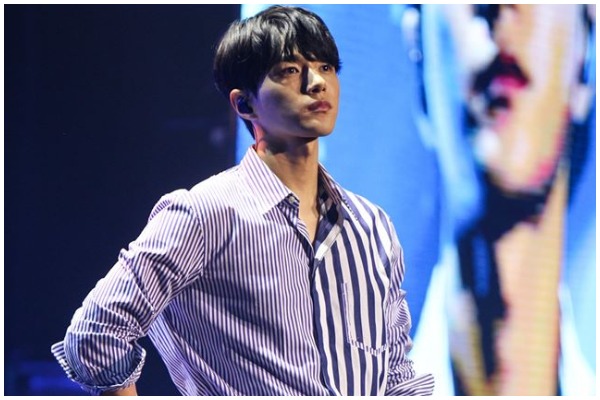 PH Inspirits surely had a blast as they spent a fun and wonderful night with their favorite TV drama angel.

Kim Myung Soo, also known as INFINITE’s L, has expressed his gratitude to fans multiple times during his solo fan meeting in Manila. Ardent fans trooped to the New Frontier Theater on the night of January 12. They showed so much enthusiasm as they screamed and cheered for their beloved idol-actor. 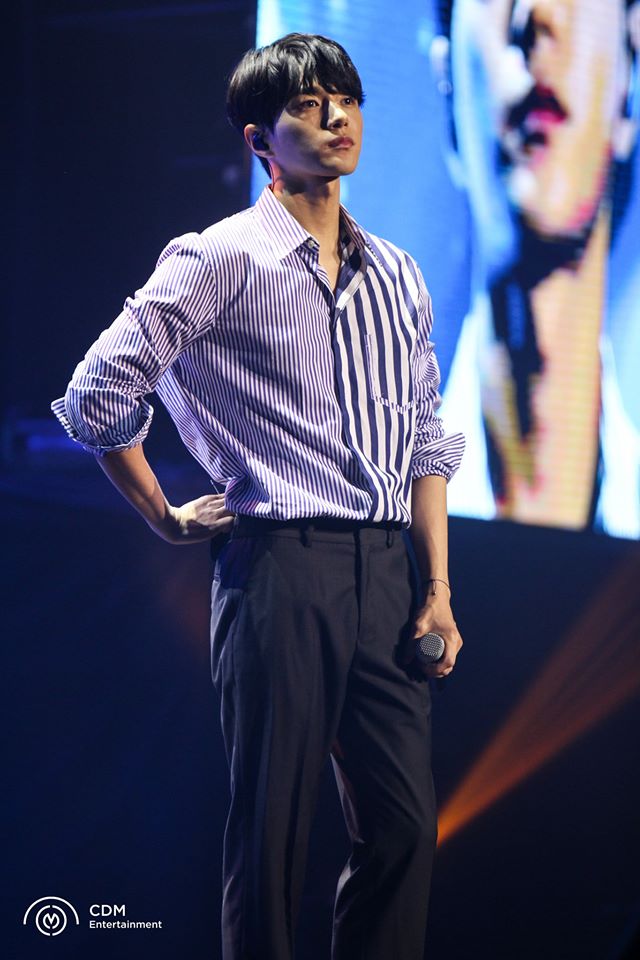 The man of the hour did not disappoint. He showered fans with heart-fluttering and adorable moments showcasing so many different sides of him. The event, which lasted for more than an hour and a half, brimmed with mutual adoration from the artist and his fans.

L started the event with a song number. He serenaded the audience with “It’s Okay Even If It’s Not Me”. It is an official soundtrack from the historical drama The Emperor: Ruler of the Mask.

After which, host Sunny Kim introduced Kim Myung Soo as fans welcomed him with the loudest screams. He thanked the audience for the warm reception and said it has been a long time since he greeted fans in Manila. 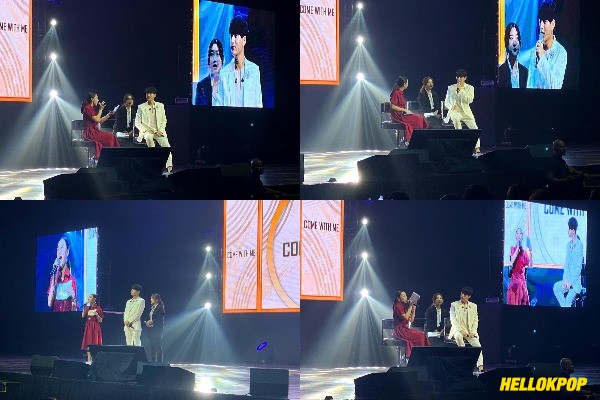 When asked what he’s been up to these days, he eagerly said he is spending some quality time with his pet cat Byeol. He added that he is currently filming for a new drama.

For his fans, the venue felt like heaven on earth as Kim Myung Soo gave out his all to ensure the night they spent with him was all worthwhile.

From the first corner up to its last, fans were given delightful moments, whether it was on stage with him or as onlookers. Every time fans went to the stage, Kim Myung Soo eagerly meets them and escorted them up. 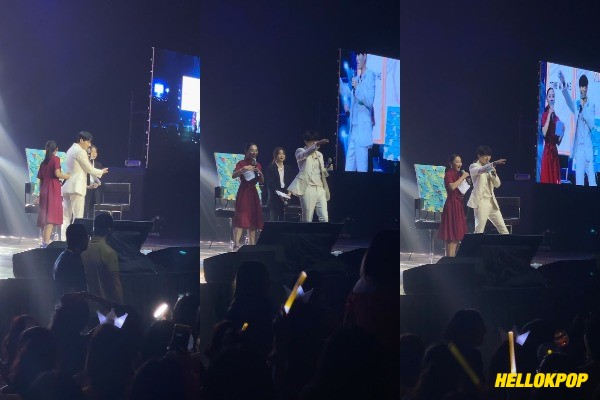 During the first corner, which was the Question and Answer (Q&A) portion, L read a number of notes written by fans and granted their wishes. A fan who was celebrating her birthday the very same day requested for him to sing her the “Happy Birthday” song.

However, instead of just simply singing it, Kim Myung Soo called the fan and asked her to come up on stage. With his soothing voice, he sang to her and hugged her after. Another fan joined him on stage and has her picture taken by Kim Myung Soo.

#KimMyungSoo called one fan onstage and sang her the “Happy Birthday” song. She also got a bonus hug from L! Lucky lady indeed!#KMSinMNL pic.twitter.com/a96ueovawj

He got up close to fans as he went down the stage during his performance of “Love U Like U”, an official soundtrack from his drama Shut Up Flower Boy Band. 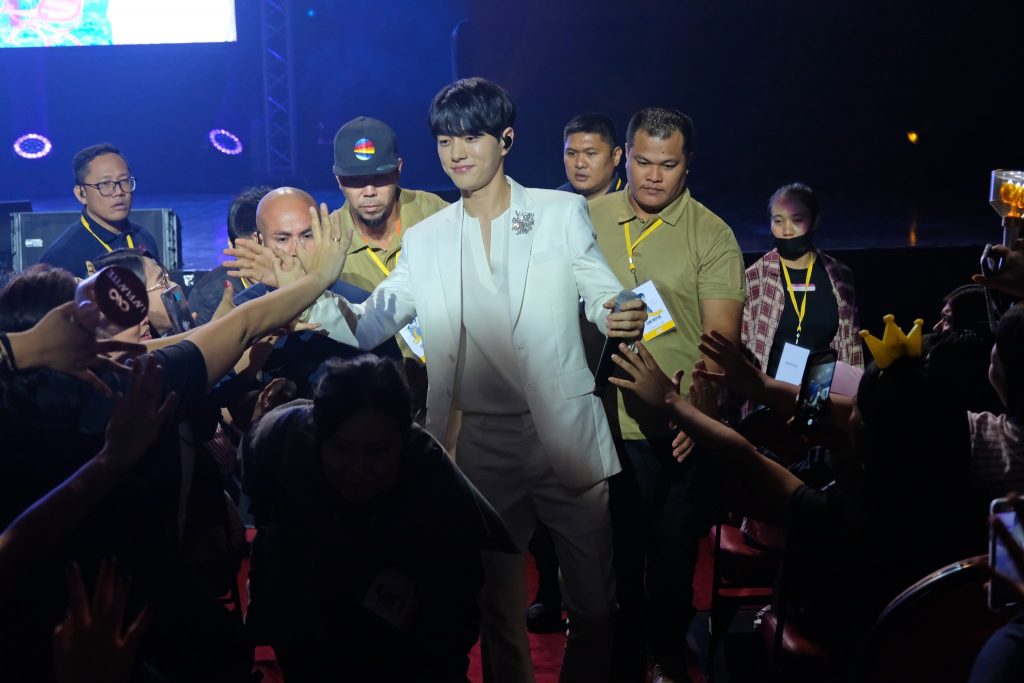 In the Bingo game, Myung Soo picked out several categories to which members from the audience should match. After the careful process of elimination, the ultimate winner took home a polaroid picture of Kim Myung Soo. But the finalists did not go empty-handed as L hugged each of them before they went down the stage. 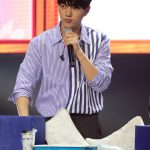 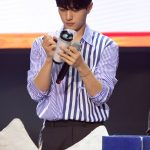 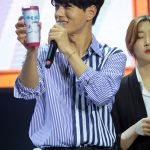 In the random gift box segment, Kim Myung Soo created and gave out a personalized tumbler with his signature to one fan.

But after learning of an extra tumbler back stage, he decided to design, put his autographed (he also wrote I Love You on it) and handed it out as well to another audience member.

He also took several pictures (selfies and photo together) with five fans, when he was only required to have it with one winner. 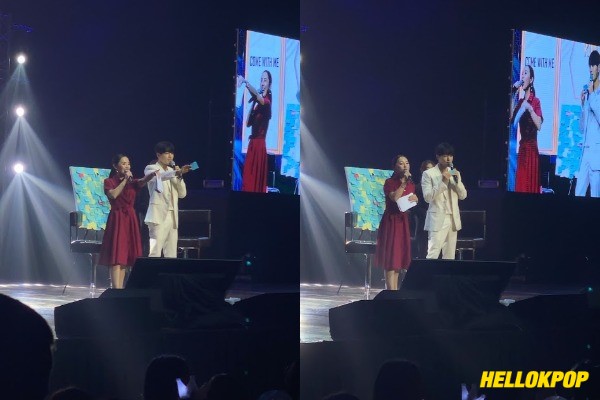 He gave the audience time to take his picture as he gladly gave different poses as the seasons (which served as his background) changed.

There was one particular moment (Summer BG), when he ran out of ideas on which pose to do and teased fans by unbuttoning his shirt. On the Winter background, as he could no longer think of anything, he just sang as the crowd snapped photos of him.

Feeling the good energy coming from the crowd, Kim Myung Soo was completely relaxed all throughout the event. Fans felt his sincerity through his answers, smiles and the way he interacted with the host and the fans. He found it amazing how PH Inspirits gave the loudest reactions every time he says or does something. 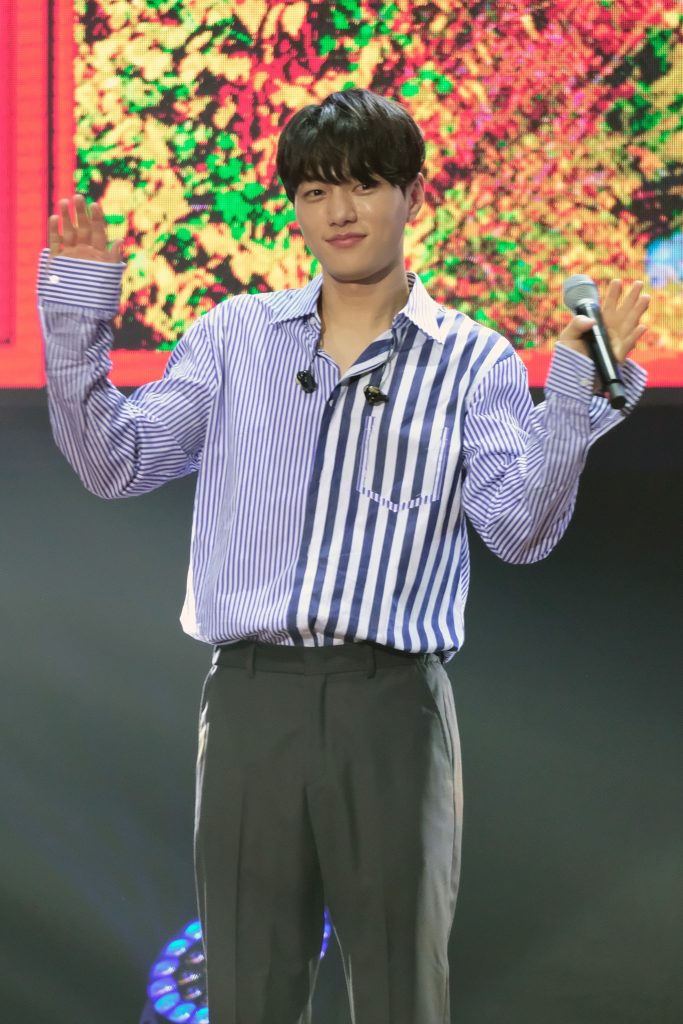 In Myung Soo’s TMI (Too Much Information) segment, he was asked to reveal something. However, he ended up narrating the things he did before the fan meeting. He animatedly began his story by saying he woke up at 9AM, took a shower and changed to the clothes prepared by the stylist. At 10AM, he felt hungry and asked his manager for a decaf and a pastry. 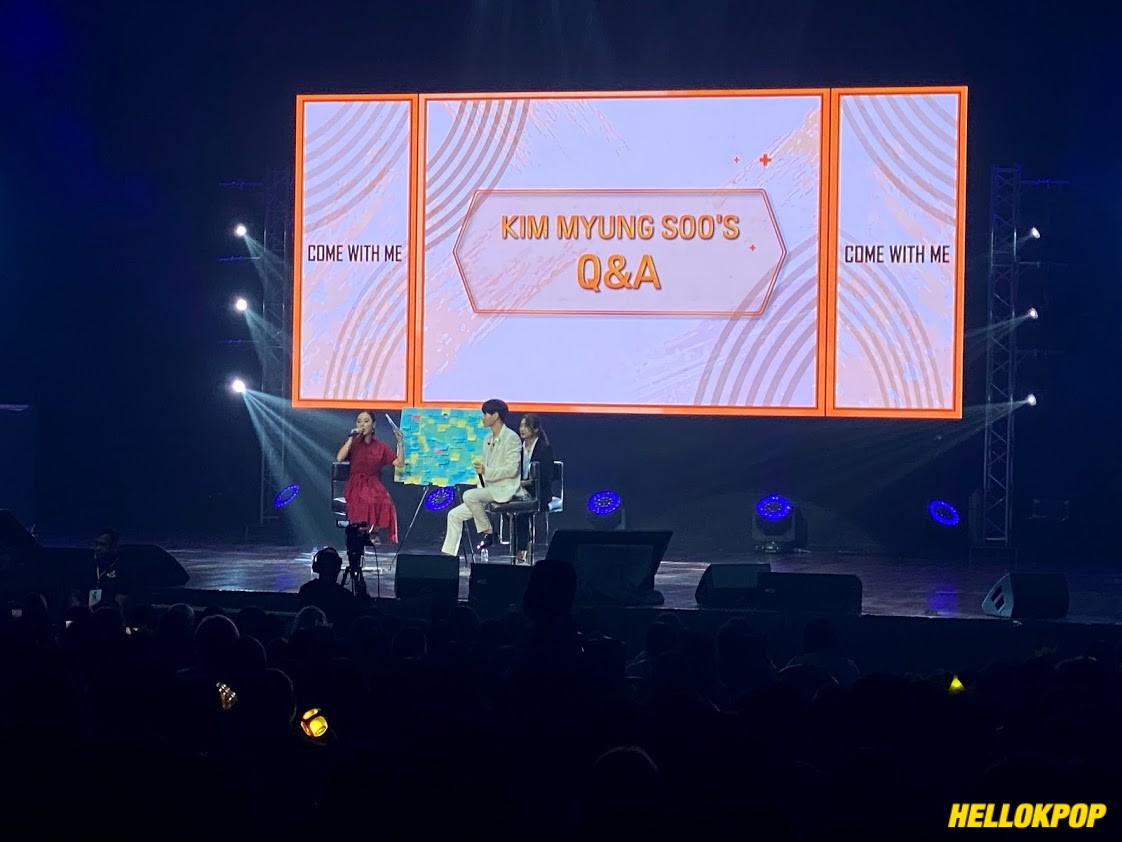 At noon he met with the media for his press conference. Fans laughed when he said that after the press conference he went to the venue and thought it would take some time to reach it (around 40 minutes). But soon realized it only took him four minutes to arrive.

He rehearsed for the evening’s event but still has three hours to spare. With the idle time, he decided to explore the surrounding area and saw several fans outside.

When he was inside the mall, he saw stalls selling mango juice as well as some fans drinking it. The fans he saw seemed to really enjoy their mango juice which made him craved for it. He concluded his story by saying he ended up ordering one for himself. 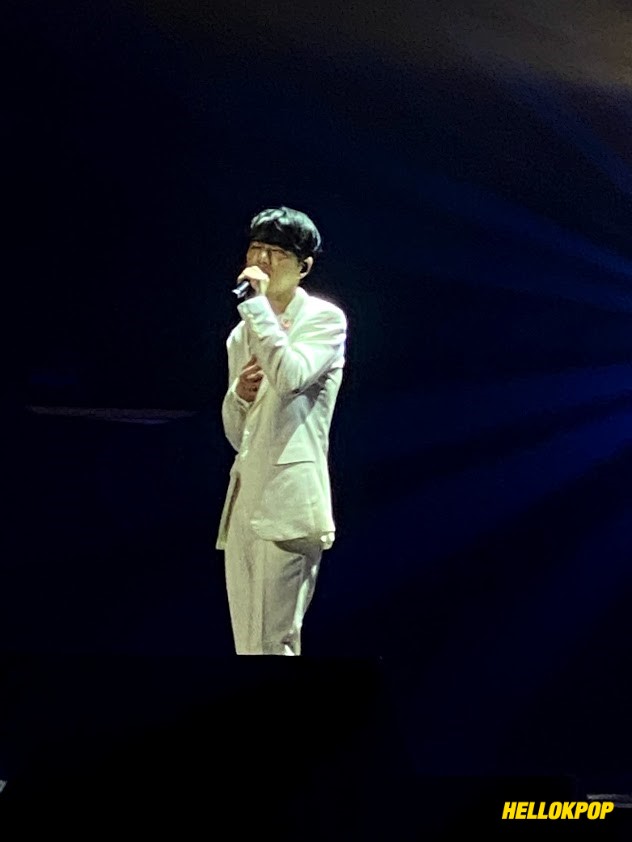 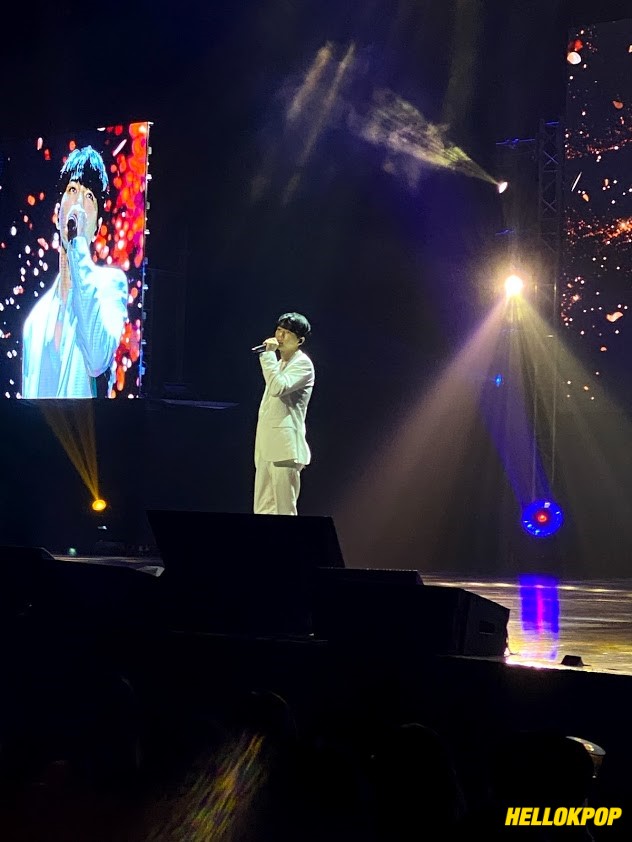 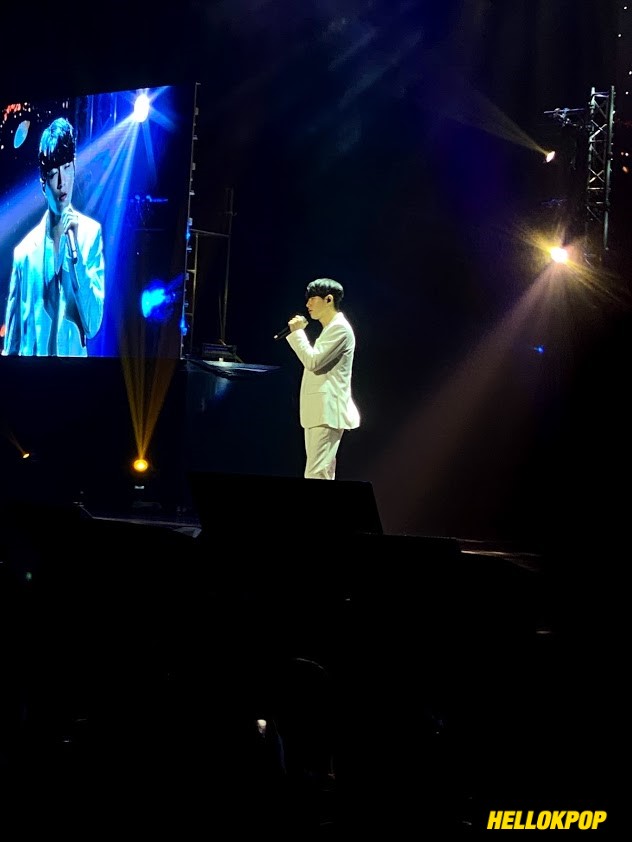 Not a selca expert

Fans have quite a reaction when Myung Soo revealed he was bad at taking selcas (selfies). He adorably defended himself and said a staff member who was actually a good photographer is the one taking those photos. L also promised fans that he will post pictures of his cat so fans would know how Byeol looks like.

He delighted fans as he cutely read Kim Myung Soo With Dramas, the title of the fan meeting’s second corner. The audience also melted when he consoled a small cut-out image of his character Shi Woo (from My Lovely Girl) who came in at fifth place (last) as the character fans chose best suited Kim Myung Soo. He said to the image board, “Ah, it’s okay” and added a squee. 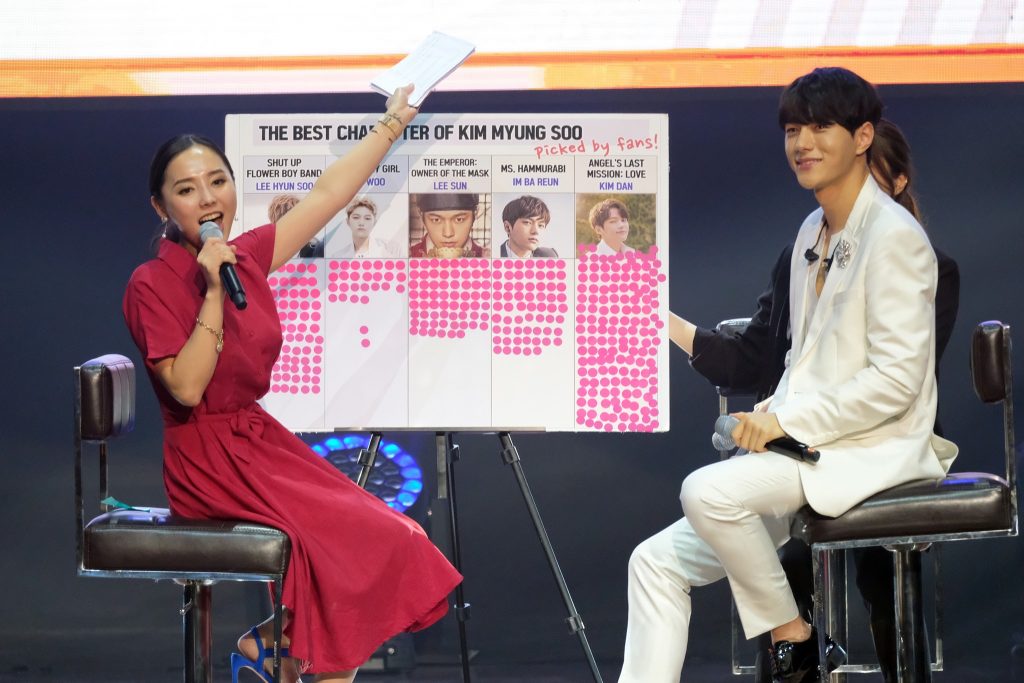 Myung Soo also greeted fans a Happy New Year and told them I Love You in the vernacular. He was quick to learn the words taught by Sunny Kim and enunciated every word happily.

Speaking of his dramas, Kim Myung Soo divulged that he rates his acting 100%. A perfect score as he is currently filming a new drama, meaning he is giving his all and best efforts. He then said that at the moment, as he was with his Filipino fans, his 100% focus was with them. 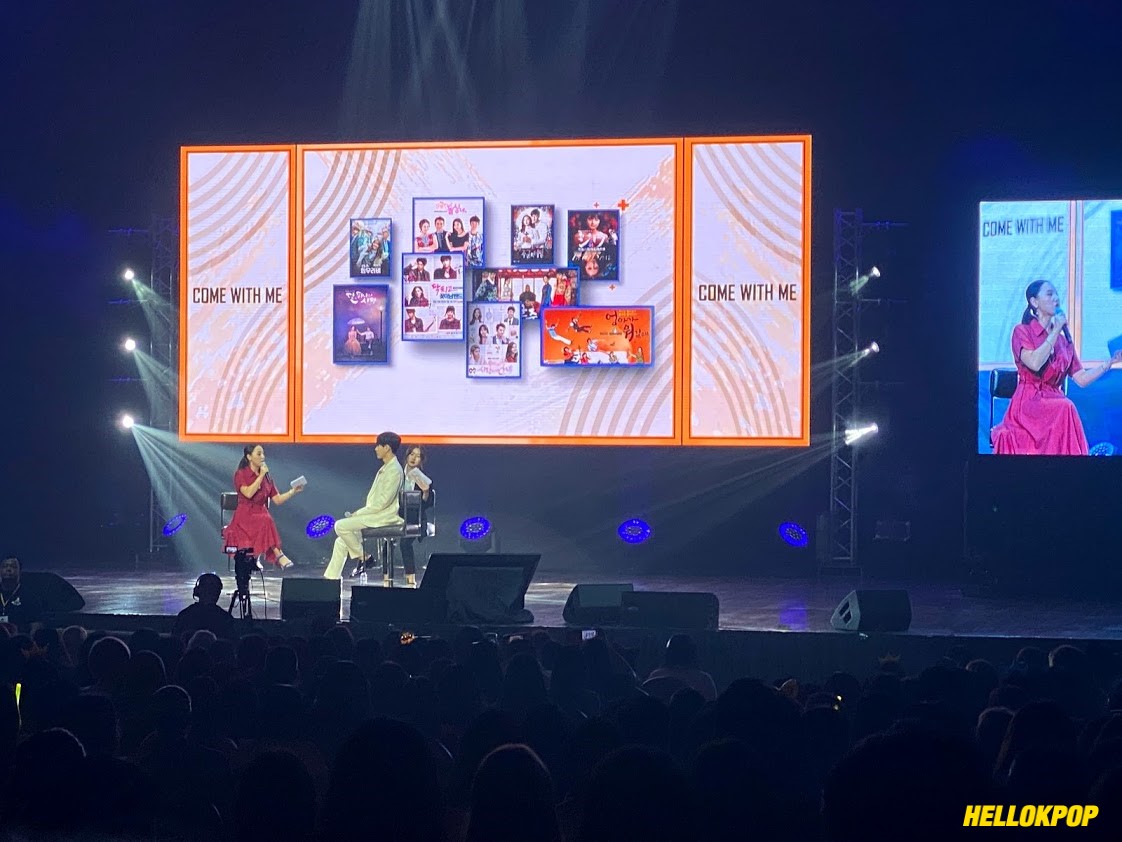 He also revealed that when picking out a project, he considers the character he can digest well. Kim Myung Soo further explained that for him to work on a project he must relate well to the character. If he can do that, he will be able to give it justice.

L revealed that his favorite role to date is Lee Hyun Soo. Playing the character from the drama Shut Up Flower Boy Band (Flower Band) enabled him to explore many emotions.

The actor he wants to work with again

He added that he wants to work with Sung Dong Il once again as he enjoyed working with him. He is like a mentor and a friend to him that they remained in contact even after Ms. Hammurabi concluded.

He was caught off-guard when he learned that his Filipino fans actually loved Lee Sun. It was the character he played in the historical drama The Emperor: Ruler of the Mask. His promised to consider doing another sageuk or starring more in historical dramas earned one of the loudest cheers from the audience.

Although fans voted Kim Dan (Angel’s Last Mission: Love) as the character that best fit him, Kim Myung Soo said that Im Ba Reun (Ms. Hammurabi) and Yoo Tan (The Day After We Broke Up) were the characters closest to his personality. 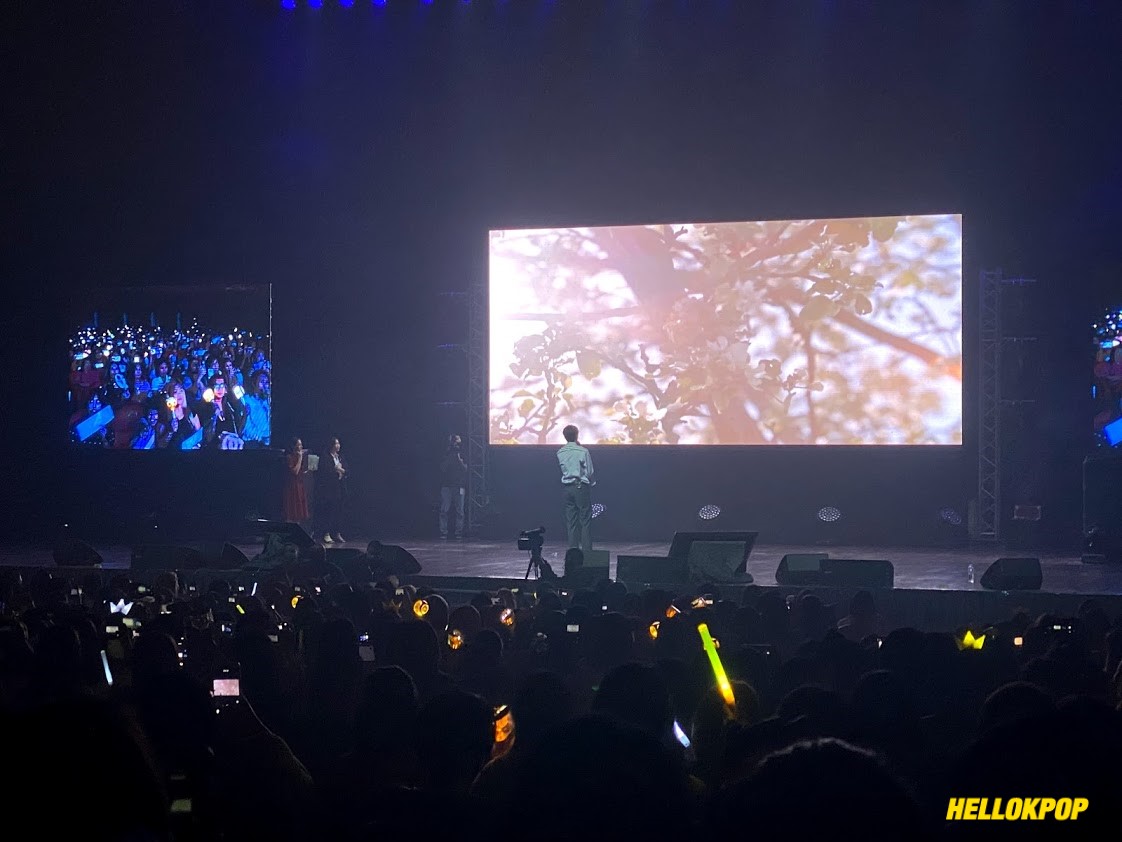 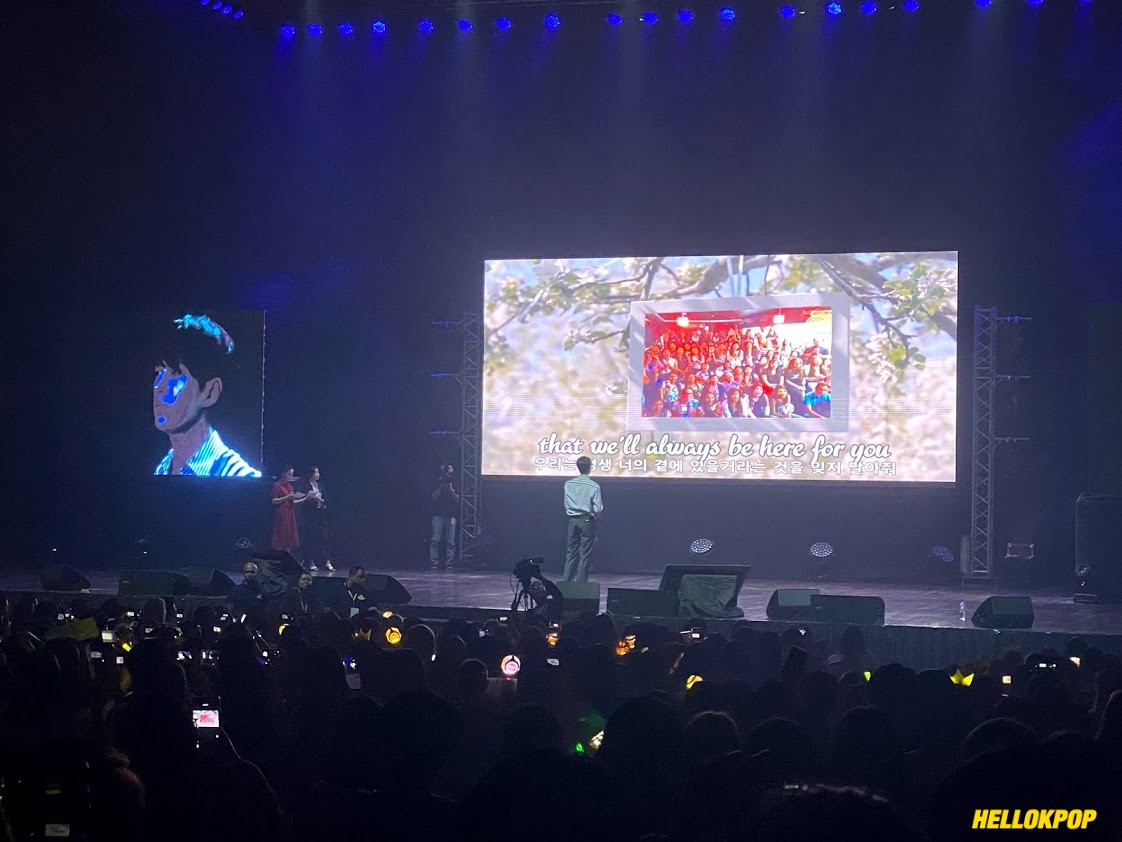 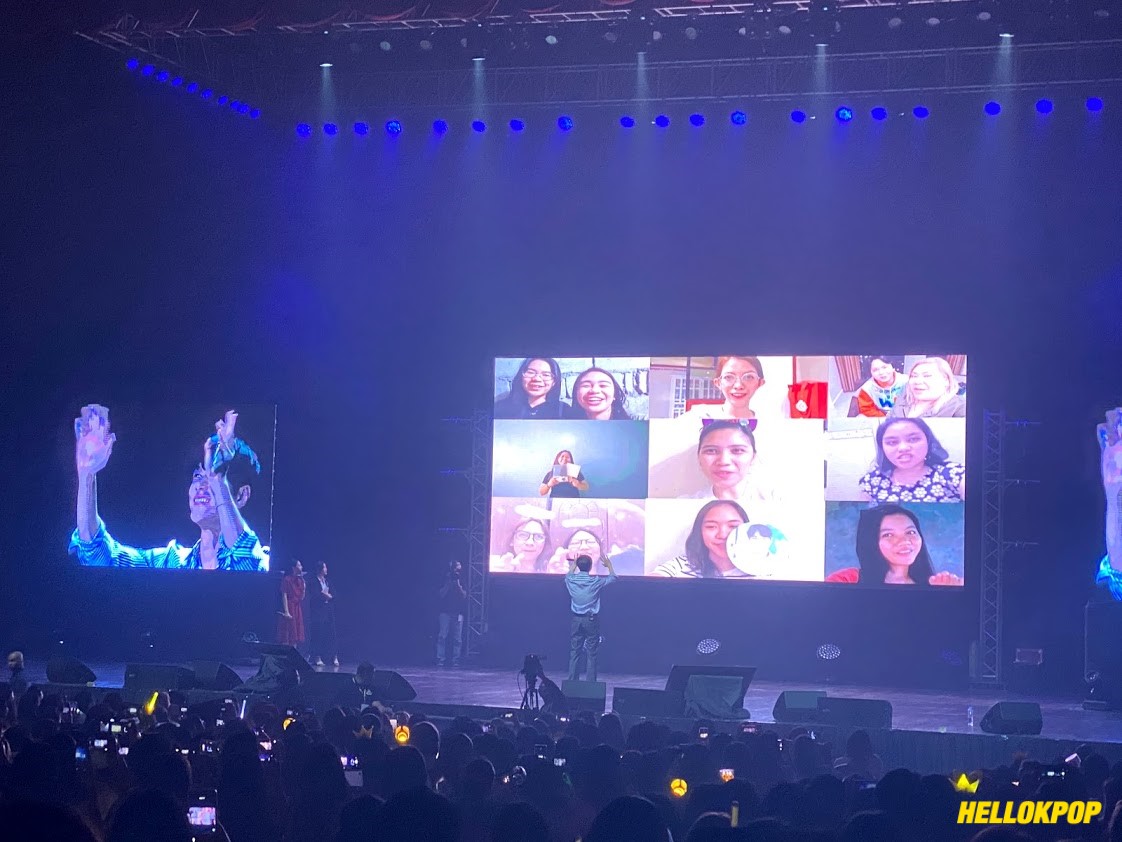 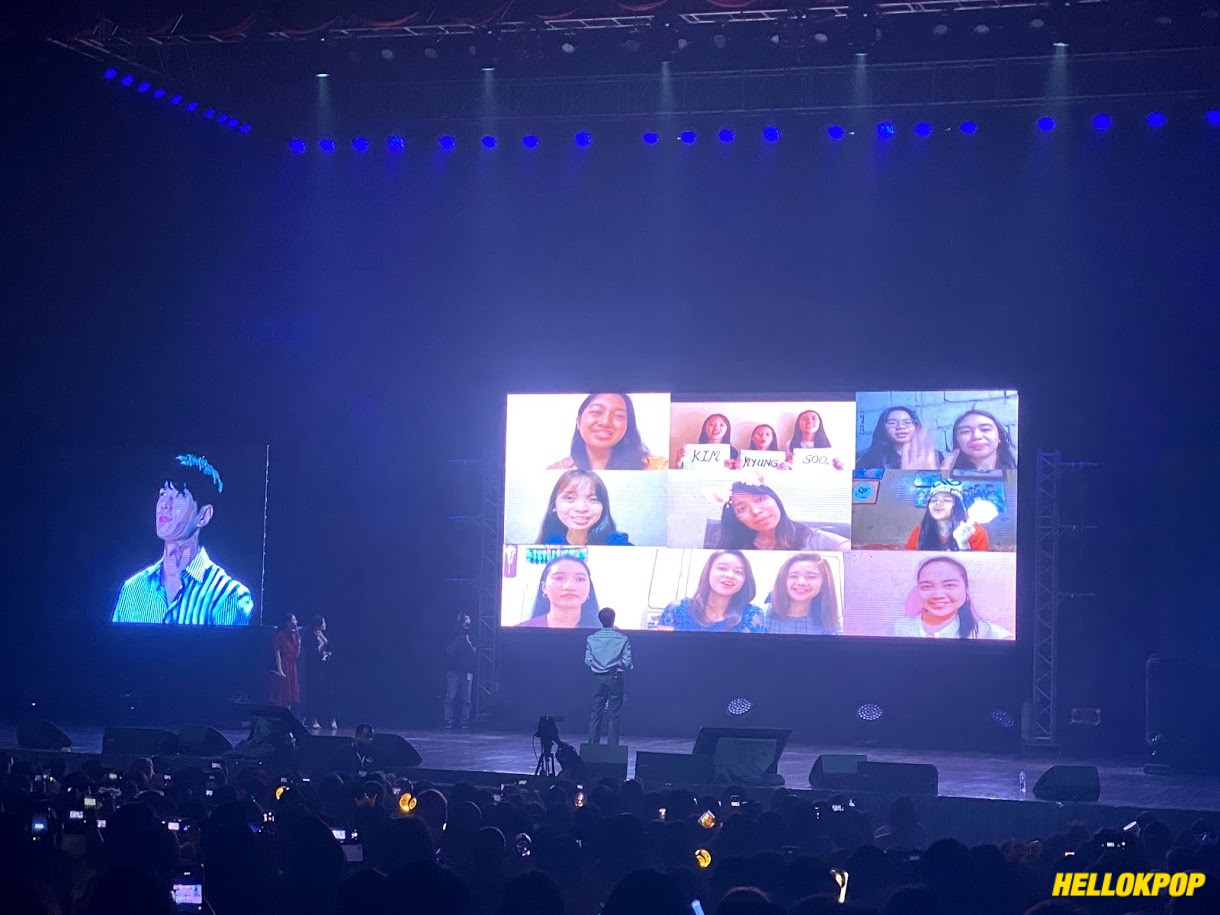 Kim also talked about Welcome, the project he is currently working on. In the drama, he is playing the role of Hong Jo, cat that turns to human. He described his character as innocent and child-like.

Hong Jo always feels protective of Soo Ra, the drama’s female protagonist. His character is the type to want to be beside her all the time. He further explained that the drama’s overall theme would have fans feeling that sense of being comforted even without the person actually being present.

A cat-lover himself, he guarantees that fans would want to raise a cat of their own after watching the drama. He then invited fans to watch as it airs on KBS 2TV on March 25.

Kim Myung Soo Pledges to be back

After gifting the audience with two more songs, Kim Myung Soo thanked the fans for coming out to see him. He praised the audience for the warmest welcome and for their energy. He said that he is looking forward to seeing and spending time once again with his fans in Manila.

When asked about his favorite part of the fan meeting, he eagerly said it was the crowd’s cheers. The fans enthusiasm kept the energy going.

He added that even the staff and organizer backstage were shock by the fans passion. He also said that he would like to come back with INFINITE as he truly enjoyed his time. 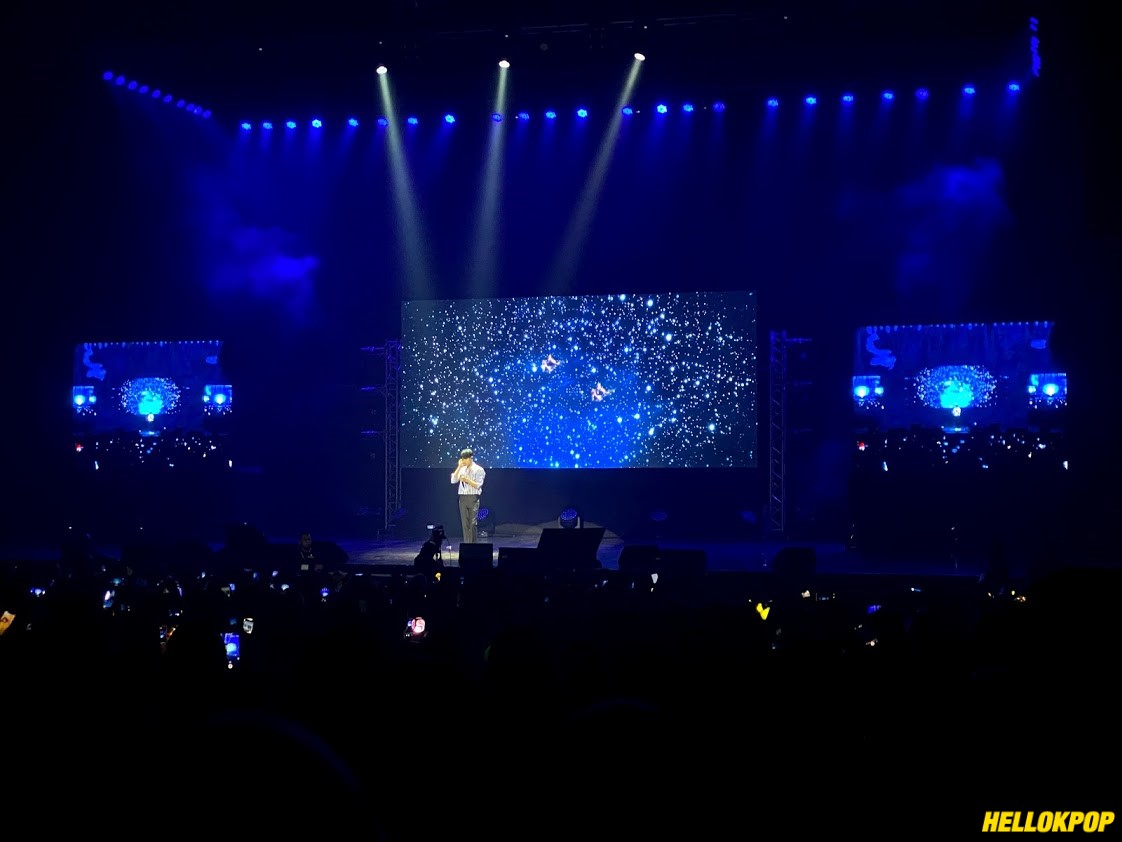 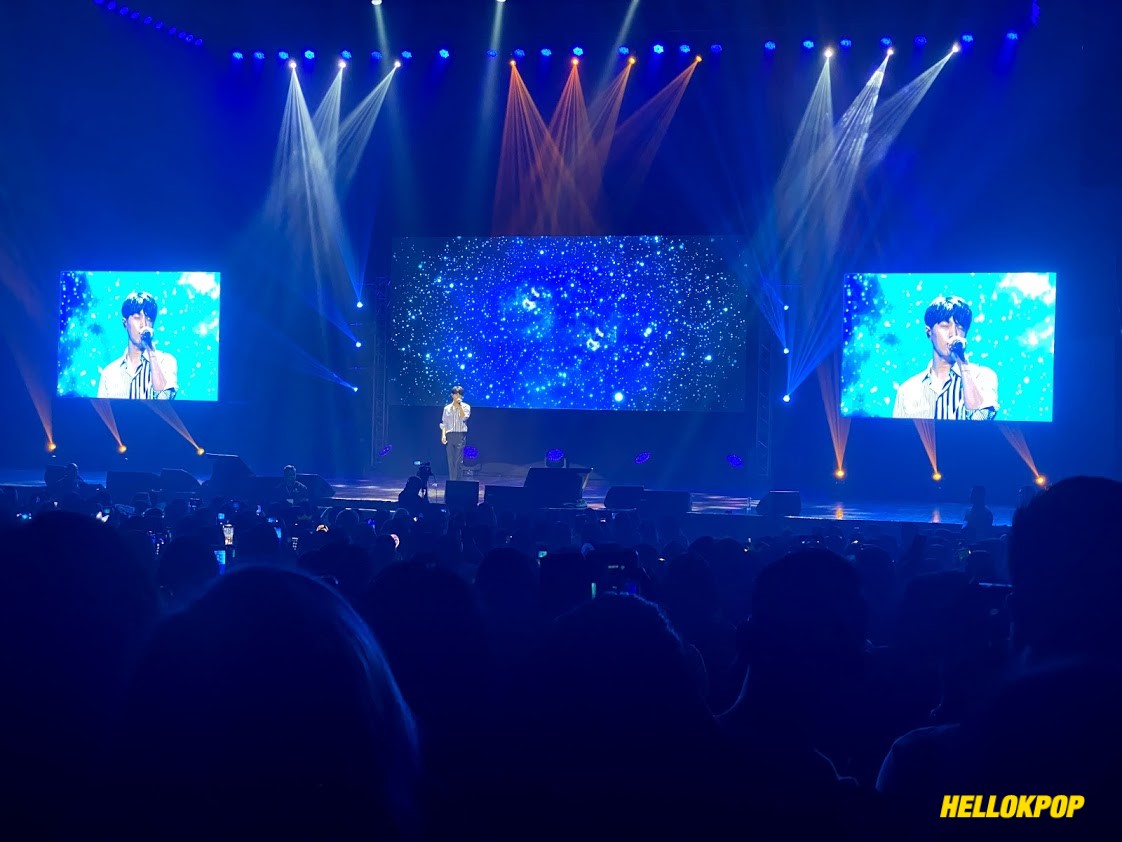 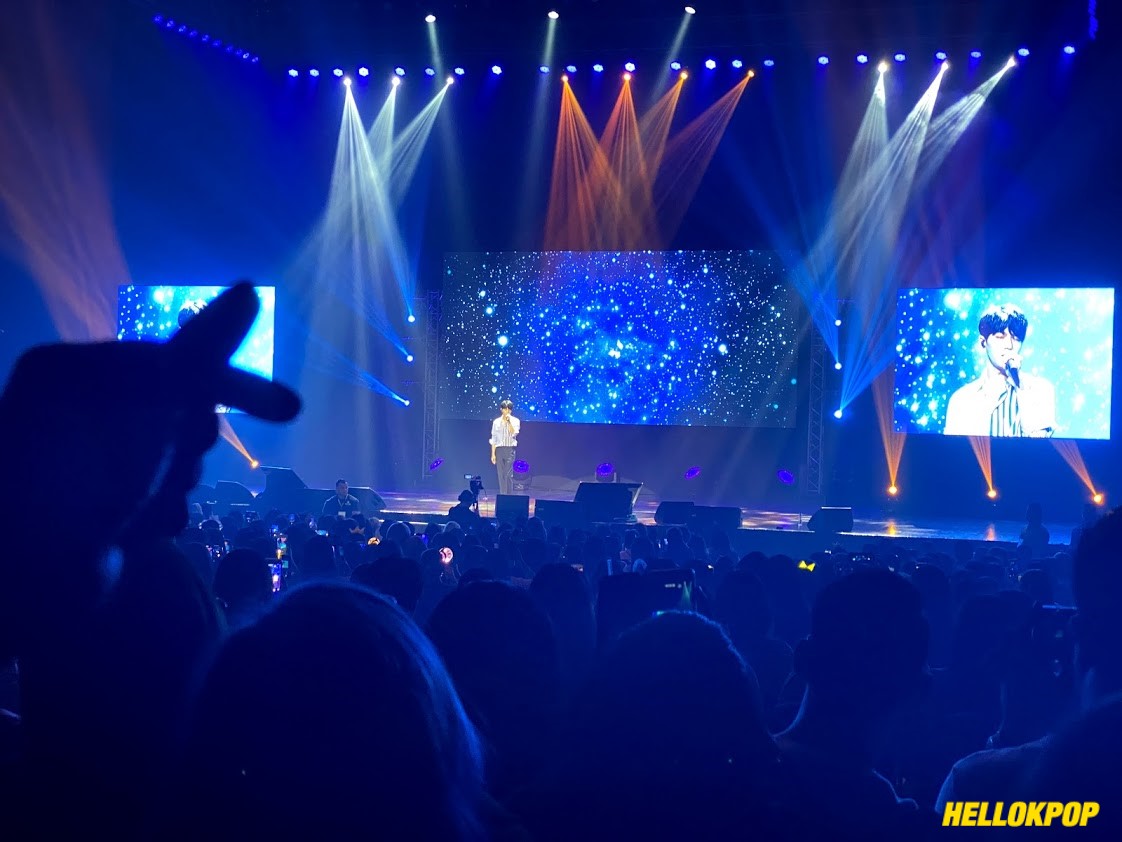 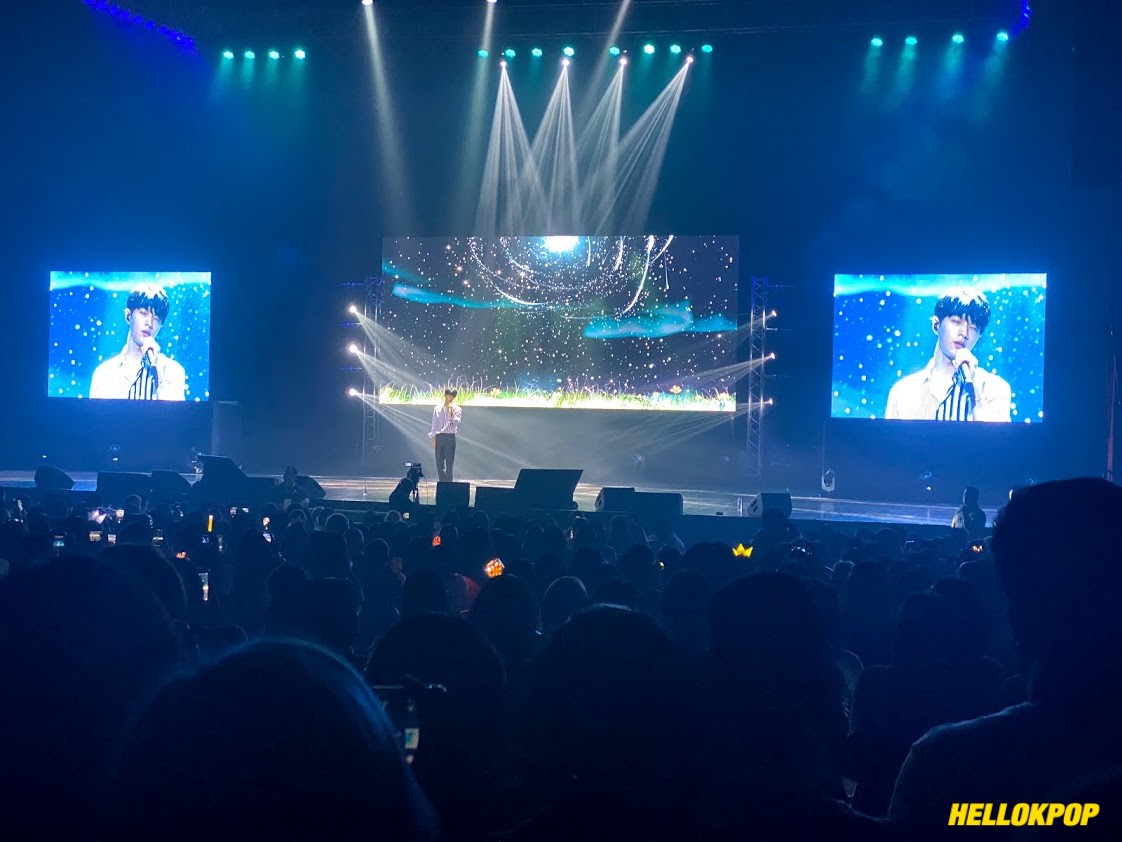 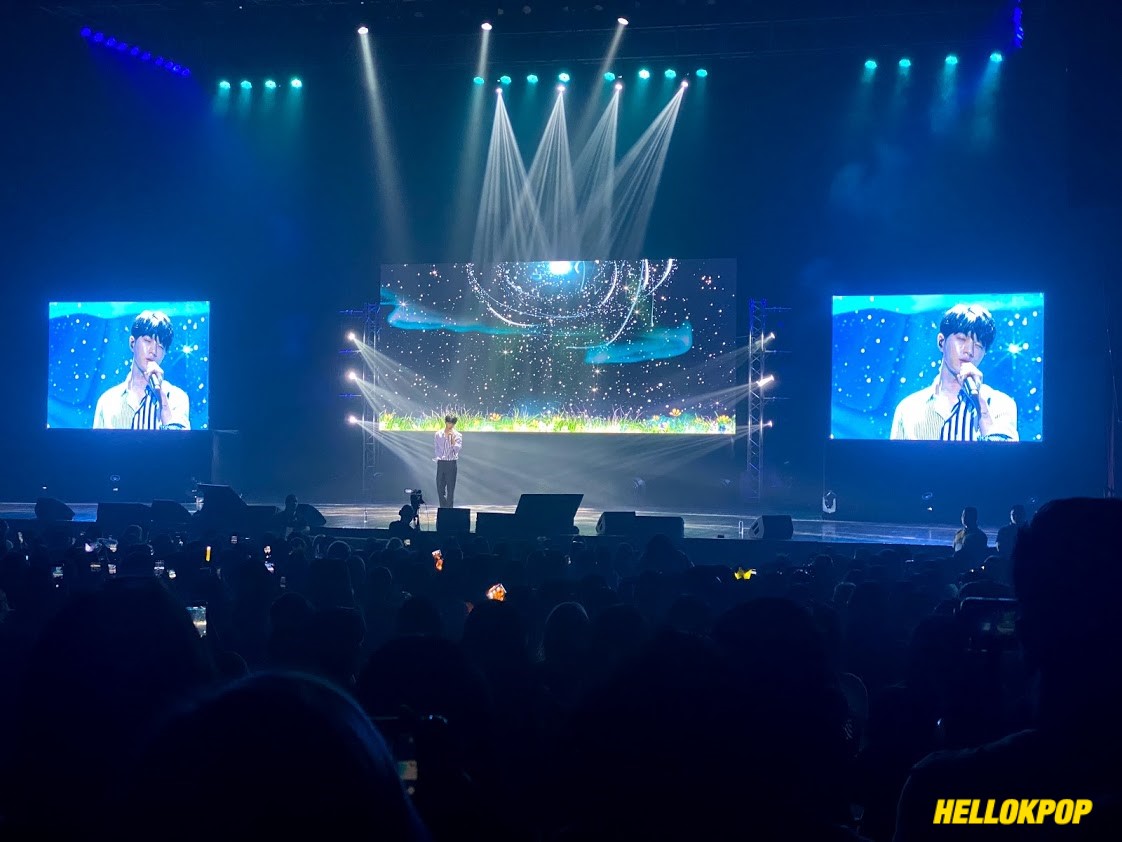 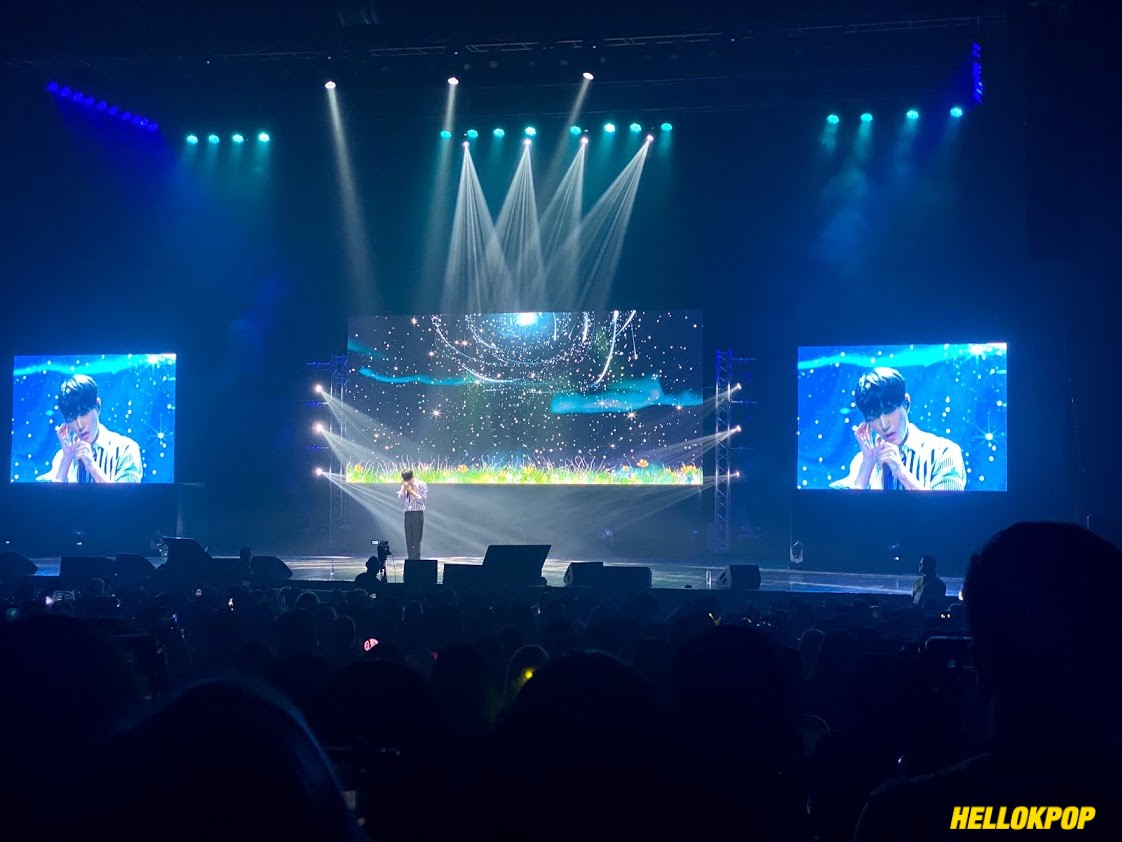 Grateful for the love and support

Fans gifted Kim Myung Soo with a video expressing their support for him no matter what. L complimented the video and said it was beautiful. He vowed to keep showing fans better sides of him.

He said that he knows he needs to discuss things with his agency, but he will make sure to comeback. Kim Myung Soo added he would like to do either a concert or another fan meeting. He also stated that he would like to return with his friends from INFINITE. 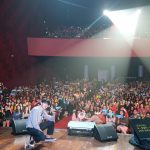 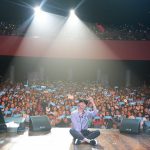 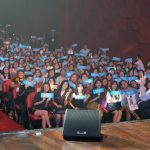 L once again thanked the fans for their support and passion. He told the fans that he will be going back to Korea with great memories. Taking the fans’ energy with him, he promised again to do his best.

That saying “Time flies when you are having fun” has been proven to be true during Kim Myung Soo’s Come With Me fan meeting. The time indeed flew by so fast but for Filipino Inspirits, memories of that night will surely last a lifetime.

Helllokpop would like to thank CDM Entertainment for the media invites to cover 2020 Kim Myung Soo ‘Come With Me’ Fan Meeting in Manila.

We need your support! If you have enjoyed our work, consider to support us with a one-time or recurring donation from as low as $5 to keep our site going! Donate securely below via Stripe, Paypal, Apple Pay or Google Wallet.
FacebookTwitter
SubscribeGoogleWhatsappPinterestDiggRedditStumbleuponVkWeiboPocketTumblrMailMeneameOdnoklassniki
Related ItemsCome With MeFan Meeting in Manilakim myung soo
← Previous Story Things We Can Look Forward To For Taeyeon’s Comeback Concert In Singapore
Next Story → “One Love Asia Festival” To Feature Mind-Blowing Music & Lifestyle Party With Asian & International Headliners