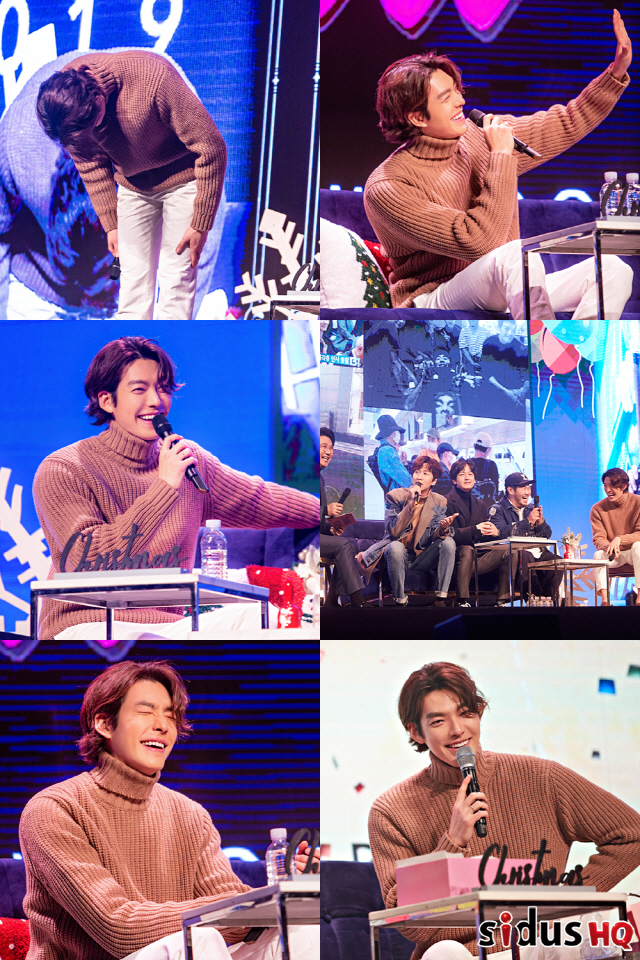 Showing how much grateful he was for the unwavering support, the actor poured out his devotion to his fans at the 2019 Kim Woo Bin Thank You Fan Meeting.

Decorated in a talk show format, the fan meet gave off a pleasant and warm vibe through MC Kim Tae Jin’s hosting lead.

Making sure to return the support and applause of the attendees, Kim responded with genuine engagement to the crowd.

Kim Woo Bin surprised fans by unveiling daily snaps and exclusive videos that were taken while he was on a break. Additionally, he shared adorable stories which made the fans burst into laughter fit.

At the end of the meeting, Kim and his adoring fans were all enthused in exchanging sincere affection and warm words. It was a satisfying time because of the engaging communication.

The actor said, “I have been waiting for this moment to meet my fans for about three years. And it was warmer, more pleasant and happier than I thought.”

Further adding how he wanted to tell a lot of stories, he confessed fearing he may not be able to communicate it well. He also promised to meet the fans more frequently in the future.

“Thank you very much for your precious time. Thank you,” he ended.

Recently, Kim attended the 40th Blue Dragon Film Awards. It officially broke his hiatus since focusing on medical treatment after being diagnosed with Nasopharyngeal cancer in May 2017.

Kim Woo Bin, who successfully left lingering blissful memories at his “Thank You” fan meeting, is yet to pick up his next project.

Hellokpop, as an independent Korean entertainment news website (without influence from any agency or corporation), we need your support! If you have enjoyed our work, consider to support us with a one-time or recurring donation from as low as US$5 to keep our site going! Donate securely below via Stripe, Paypal, Apple Pay or Google Wallet.
73
SHARES
FacebookTwitter
SubscribeGoogleWhatsappPinterestDiggRedditStumbleuponVkWeiboPocketTumblrMailMeneameOdnoklassniki
Related ItemsKim Woo Bin
← Previous Story A Fangirl Diary: It’s Always A Beautiful Time With NCT Dream
Next Story → ITZY Makes Glitzy Debut Showcase In Manila + K-MMUNITY PH Levels Up Fans’ Experience