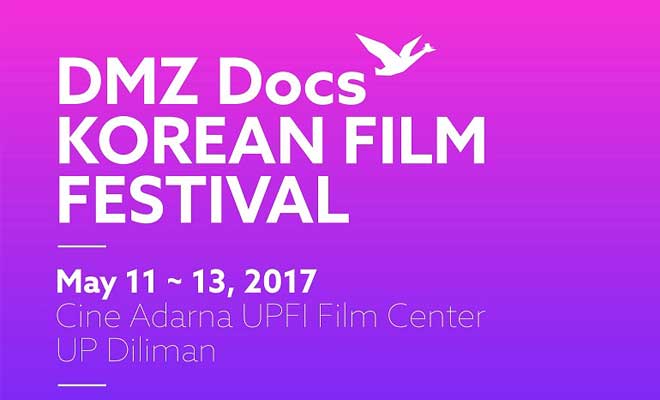 Watch seven Korean films for free at the ‘DMZ International Film Festival’ this May in UP Film Institute!

Seven internationally-acclaimed documentaries from Korea will be showcased in the Philippine leg of ‘DMZ International Documentary (DMZ Docs) Film Festival’ from May 11 to 13 at the University of the Philippines (UP) Film Institute.

The ‘DMZ Docs Korean Film Festival’ presents documentaries with various themes and styles, revolving around the development of peace, communication and life. It also aims to promote documentary genre as a mean of communication. 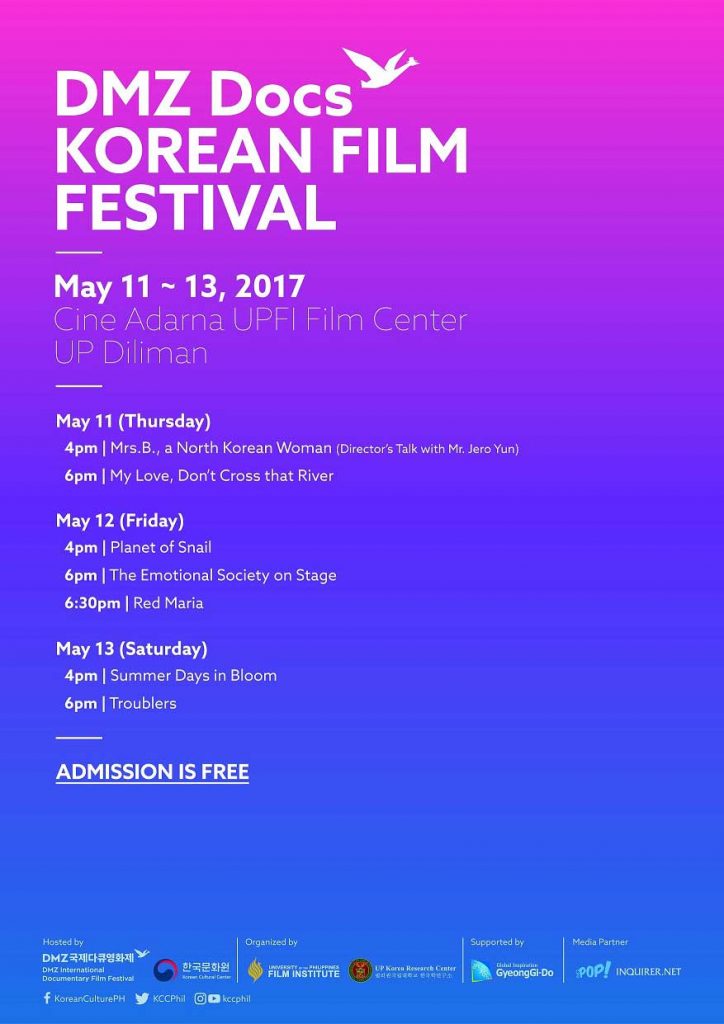 Director of the opening film ‘Mrs.B., a North Korean Woman’ Jero Yun will grace the first day of the festival on May 11, 4PM, and hold a Director’s talk with the audience.

The synopsis of the seven films to be featured for the ‘DMZ International Film Festival’:

A wife and a mother of two, Mrs. B decides to cross the Chinese border for work. However, the broker who claimed to arrange work for her, sells her to a poor farmer in a remote region in China.

To earn a living, she decides to become a human trafficker, handing over North Korean defectors like her to another point organization. Unable to bring her North Korean family to China, Mrs. B eventually arranges to get them into South Korea.

Following her arrival in South Korea, Mrs. B is denied of the refugee status by the government –suspecting her of being a drug dealer and spy. Dissatisfied with her life in South Korea​,​ she expresses her wish to return to her husband and family in China.

My Love, Don’t Cross That River follows an elderly married couple Jo Byeong-man and Kang Kye-yeol until the last moments of their 76-year marriage.

Despite the long years of being together, the couple is still dear to each other. Even now, they wear matching traditional outfits when going out. Their dear and devoted attitude to each other is truly a model for life companions.

However, the only thing that worries them is the law of nature—death.

Planet of Snail covers the life and relationship of a disabled couple.

Young-Chan has been deaf and blind since childhood. His wife Soon-Ho is also a handicap, who has a spinal deformity. The couple communicate using a finger-Braille in which Soon-Ho types words on his hands.

The film allows the audience to imagine the world from their point of view and senses. In this process, we come to understand their feelings as an ordinary couple, rather than a disabled couple in an extraordinary situation.

Instead of just delivering details of the reality that service industry laborers face, ‘The Emotional Society on Stage’ portrays the burden of reality that they are coping with.

It exposes the hardships that they encounter at work and the terrible working conditions of service industry workers as they are forced to tolerate humiliations.

The movie perceives social issues with cinematic language and draws the audience to feel the life of these workers with fierceness and creativity.

The film captures the lives of different women–a mother, a prostitute, a part-timer, an immigrant worker, and an old comfort woman from Japan, the Philippines and Korea.

It conveys that while each of the females are not connected with each other, the sufferings which they endure and their strength to cope with it unite them in the struggle against the patriarchal society.

Gabriel and Du-yeol are male lovers whose on-off relationship is further tested when the two realize that they are both infected with HIV or AIDS.

Gabriel, who understands his infection well, joins the fight for the rights of homose-xuals and those infected with HIV/AIDS. However, Du-yeol is afraid to be discriminated for his illness that he is terrified with.
​​
Summer Days in Bloom is not a film that grandiosely claims for the rights of the minorities, especially those infected with HIV/AIDS. However, as the film follows the daily lives of the two men, it naturally exposes the level of discrimination they are faced with.

LEE Young, a documentary filmmaker and openly lesbian, encounters Lee Muk, an ordinary 70-year-old Korean living a double life as “Mr. Pants”; and a Japanese lesbian couple Non and Ten, while researching for earlier generation of lesbians in South Korea.

The LGBT community in South Korea is often labeled as “Pro-North Koreans” and “immoral.” They are often perceived as danger to the nation’s safety, future, and well-being.

The film shows how unsecure and unsafe the life of social minority, including lesbians, can become especially when confronting an enormous danger in Korea.

The ‘DMZ Docs Film Festival’ is hosted by the Korean Cultural Center (KCC) in the Philippines in partnership with UP Korea Research Center. The film festival is part of the ‘9th Annual DMZ International Documentary Film Festival’ in Korea, which is set to open on September 21 to 28 in Goyang and Paju city, Korea.

All films are with English subtitles and free of charge. For more details, contact the Korean Cultural Center at 555-1711, or email [email protected]. You may also visit www.koreanculture.ph.

This invitation to the free screening of Korean films is brought to you by Korean Cultural Center in the Philippines.