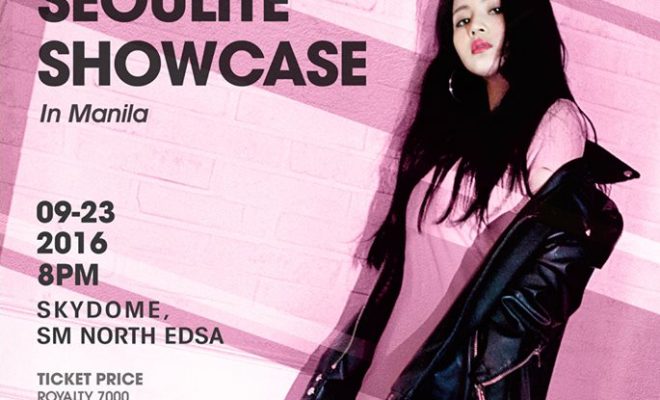 Another Korean artist to look forward to, Philippines!

Korean singer Lee Hi is set to steal and win the hearts of Filipinos in her 2016 LEE HI SEOULITE SHOWCASE in MANILA on September 23. Through her official Facebook account, the singer announced her first ever concert in Manila, produced by PULP Live World who also brought her fellow YG Entertainment artists like 2NE1, Big Bang and EPIK HIGH to Manila.

The concert will be held at SM North EDSA Skydome next month at 8 p.m. and the ticket sales will start on August 27 at 10 a.m.. The ticket prices ranges from Php 4,000.00 to Php 7,000.00. Further details regarding the showcase will be announced in the coming days, so stay tuned!

Hellokpop, as an independent Korean entertainment news website (without influence from any agency or corporation), we need your support! If you have enjoyed our work, consider to support us with a one-time or recurring donation from as low as US$5 to keep our site going! Donate securely below via Stripe, Paypal, Apple Pay or Google Wallet.
78
SHARES
FacebookTwitter
SubscribeGoogleWhatsappPinterestDiggRedditStumbleuponVkWeiboPocketTumblrMailMeneameOdnoklassniki
Related Items2016 LEE HI SEOULITE SHOWCASEconcertFacebookLee HiManilaPulp Live WorldSM North EDSA Skydome
← Previous Story Sistar’s Hyolyn And Jay Park To Electrify ‘Electronic Dance Music Festival’ In Singapore
Next Story → Hanyoung To Meet Fans In Japan This September With Meaningful ‘Waves’