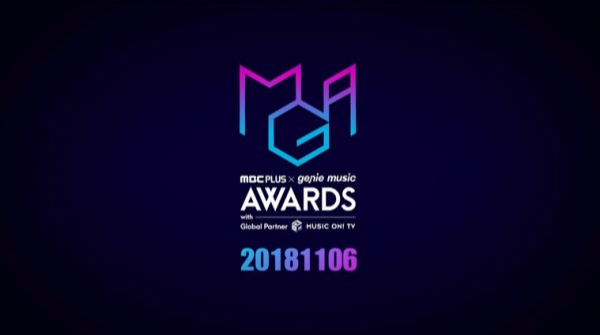 Merging music and entertainment, this award ceremony collaboration is one for the books!

MBC Plus, one of the leading South Korean television companies that produces media, broadcast and telecommunication products for non free-to-air networks and Genie Music, the leading production and distribution company for music in South Korea, are coming together for the 2018 MGA Award Ceremony.

The two companies are co-hosting the event which will be held on November 6, 2018. The organizer for the 2018 MGA Award Ceremony dropped a teaser spot image which contained a simple and sophisticated effect of the event name. It was named as the official logo for the event to help promote the awards to netizens by catching their attention.

The 2018 MGA Award Ceremony is at the heart of the domestic music content industry. It is expected to attract more attention as the first awards ceremony that combines recognition and appreciation for rewardable broadcast and music platform companies.

The show is planned to display explosive stages as it opens the event with top class musicians and idols in Korea. It will also offer a very special stage that is unique among the usual stages fans see in music awards show. People are looking forward to the promised collaborations of K-pop and international artists which will be seen on the stage of the 2018 MGA Award Ceremony.

The Incheon Namdong Gymnasium is ready to be filled with fans, idols and TV stars on November 6, 2018. Make sure to look forward to this momentous event!

Hellokpop, as an independent Korean entertainment news website (without influence from any agency or corporation), we need your support! If you have enjoyed our work, consider to support us with a one-time or recurring donation from as low as US$5 to keep our site going! Donate securely below via Stripe, Paypal, Apple Pay or Google Wallet.
FacebookTwitter
SubscribeGoogleWhatsappPinterestDiggRedditStumbleuponVkWeiboPocketTumblrMailMeneameOdnoklassniki
Related Items2018 MGA Award CeremonyGenie MusicMBC Plus
← Previous Story Lee Jong Suk Celebrates His Birthday With Fans In Taiwan And Thailand
Next Story → IU Treats Fans With 10th Anniversary Tour Concert + October Comeback