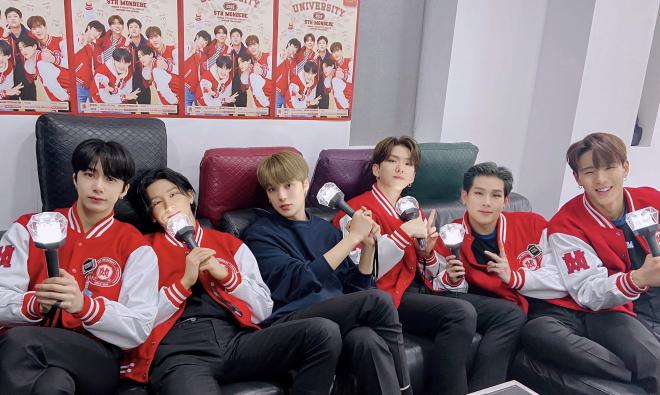 What a happy way to spend the weekends with fun games, heartfelt ments, and awesome performances from MONSTA X!

Even though the pandemic brought unfortunate events that hinds the group and its fans to see each other face-to-face, the loving boys of MONSTA X still made sure that their never-ending love would reach all MONBEBE around the world.

Live-streamed through Naver’s V Live for two days (March 6 and March 7), the six charismatic members of MONSTA X came up with the concept of being college boys. MONSTA X expressed a warm senior feeling as each of them colored fans’ hearts with excitement.

Commencing the fan concert, an opening video was shown with the members of the prestigious MX University followed by an adorable “Stand Up” stage. Because of the pandemic, there were limited opportunities to see MONBEBE up close. MONSTA X said, “We’ve waited for this day more than ever. I’m nervous and excited, at the same time.”

Particularly, as the concept of the fan concert is “college life,” each of the members portrayed different university majors. Shownu was from the Computer Science Department while Minhyuk represented the Sculpture Department.

On the other hand, Kihyun was a student from the Cynology/Pet Care Department. Perfect for his model-like body, Hyungwon represents the Fashion Design Department. While Joohoney and I.M belonged to the Theater and Film Department and Architecture Department, respectively.

MONSTA X presented various corners and fun segments, demonstrating that each of them is unique in their own way. From sharing what they’ve done for the past year through Powerpoint presentations to playing hilarious games, the two nights were filled with laughter and bliss.

Various VCR videos also presented the different charms of the members. They appeared as handsome seniors of MONBEBE who is a freshman at MX University. Furthermore, each member shared honest stories, recalling their time as trainees and how they were able to set foot to where they are today.

MONSTA X and MONBEBE, a bond no one can break

Followed by an A++++++ performance that no one could ever take their eyes off, MONSTA X took the stage with “Middle of the Night,” “You Can’t Hold My Heart,” “Nobody Else,” “By My Side,” and “Dramarama”. Graced with overflowing charms and strong stage presence, MONSTA X also performed more of their hit songs such as “Beautiful,” “FANTASIA,” “Follow,” and “Love Killa”.

On top of that, the members’ unit performances made the fan concert flavorful and richer. Specifically, Minhyuk and I’M’s “Carnival,” Kihyun and Hyungwon’s “Night View,” and Shownu and Joohoney’s “Gasoline” gave a heart attack to every MONBEBE at home.

All throughout the fan concert, which lasted for about three hours, MONSTA X and MONBEBE communicated in real-time through comments. Surely, these two days provided lots of unforgettable memories as fans from all around the world continued showering their affection for the wonderful team. And as if repaying the fans’ enthusiastic support, MONSTA X charmingly decorated the fan concert with the encore stages “ZONE” and “Beautiful Night.”

MONSTA X had also expressed their regret for not being able to see fans face-to-face. Additionally, they were relieved to be able to finish the two-day fan concert happily without getting hurt or injured. MONSTA X also voiced out their hopes to see MONBEBE and promised to serve the greatest and most amazing stages as soon as possible.