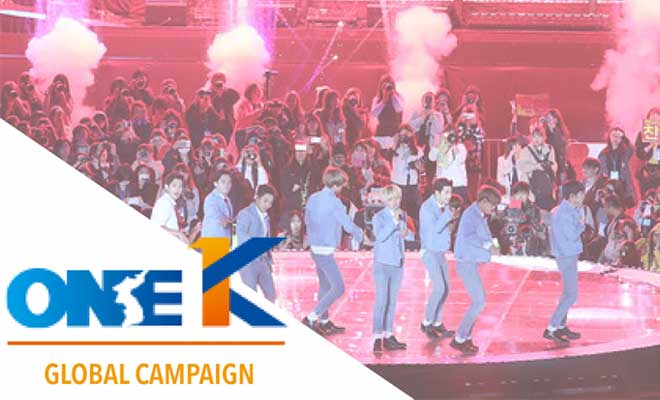 ‘ONE K Concert in Manila’ Confirmed For March 2017

This is not a drill, the ‘ONE K Concert in Manila’ is really happening in March 2017!

The event, titled ‘ONE K CONCERT: ONE DREAM ONE WORLD’ is set to gather youth and distinguished guests at the Mall of Asia Arena in Pasay City on March 2, 2017. The program will start at 7:00 PM (PHT).

The concert is just one of the highlight events at the Global Peace Convention 2017, a bi-annual event of the Global Peace Foundation. It will convene thousands of participants in order to connect popular culture and advocacy for peace.

Watch the event overview from Global Peace Foundation Philippines below:

At the time of writing, there are no guests or performers announced by the organizers, yet. Information regarding whether the tickets to the concert will be open to the public is also not yet available.

The ONE K Concert also features the song, One Dream One Korea, a New Age Unification song of the Korean peninsula with the message, “One dream will create One Korea.”

It is sung by Korea’s leading vocalists from K-pop groups, such as EXO‘s Baekhyun and EXID‘s Solji and singers like Yangpa and Na Yoon Kwon.

You can watch and sing along to the song here from ONE K:

About the One K Global Campaign

In 2015, the One K Global Campaign launched as a part of a popular movement for Korean Unification. It also aims to contribute to a larger effort to advance regional peace and global security.

The Campaign kicked off with highly publicized events in the USA, Japan and a ‘One K K-Pop concert’ at the Seoul World Cup Stadium in South Korea, reaching millions of people across the globe.