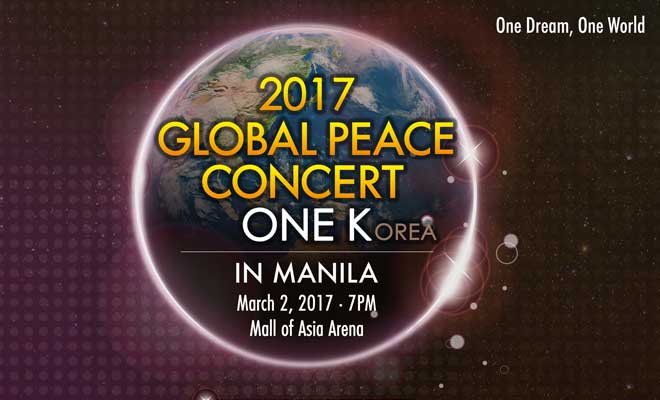 It’s a unifying star-studded night on March 2 in Manila!

The first K-Pop show in the Philippines of 2017 is coming to town this March. The show features distinguished K-Pop groups AOA, BTOB, B.A.P, B1A4, CN Blue, SHINee and PSY.

The 2017 Global Peace Concert ‘One K in Manila’ is happening on March 2 at the Mall Of Asia Arena at 7PM.

Read More: ‘ONE K Concert in Manila’ Confirmed For March 2017 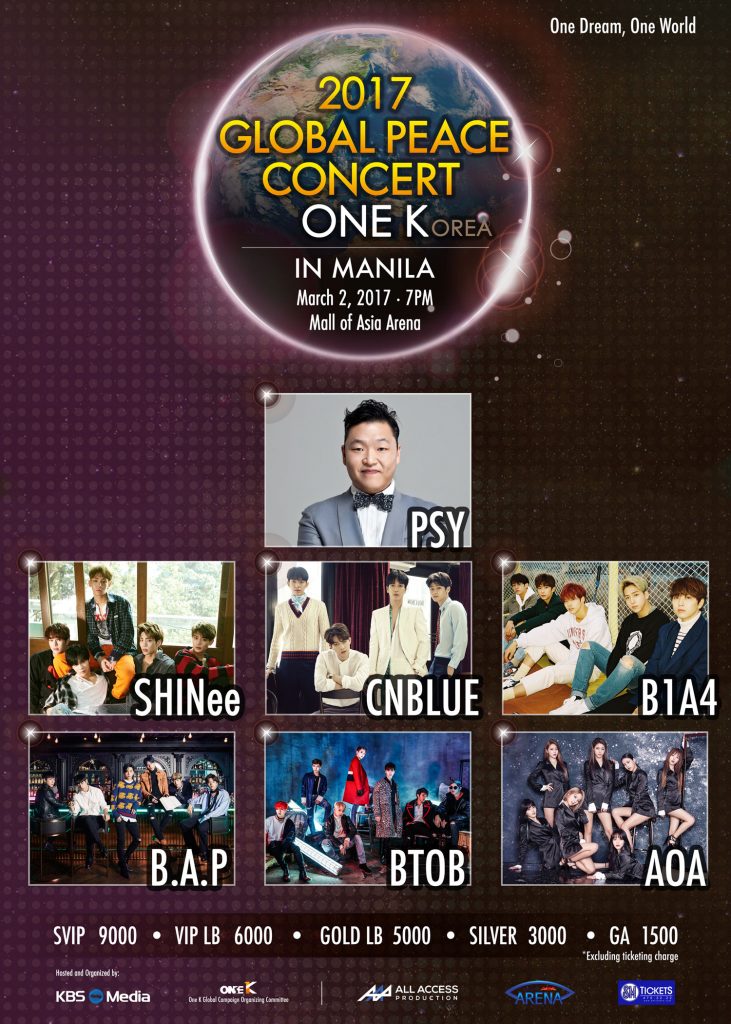 The group organized a unification –themed concert, attended by various K-Pop idol groups and artists, held last September 10, 2015 at the Sangam World Cup Stadium in Seoul, South Korea. The event drew attention from young South Koreans all over the country.

The Year of Going Global

This year, the group is set to expand its campaign on a global scale by collaborating with internationally renowned producers. Jimmy Jam, Terry Lewis and American singer-songwriter, Peabo Bryson and various acts from South Korea worked together to produce the One K Global Campaign song.

After the release of the said single, the global tour will kick off in the Philippines on March 2, 2017. This will be followed by events in the United States, China, Japan and other nations.

For more information on the One-K Global Campaign please visit the following links:

Watch and listen to the ‘One Dream, One Korea’ song below:

The Manila, Philippines show is brought to you by KBS Media and ONE K Global Campaign Organizing committee, in partnership with All Access Productions.

We need your support! If you have enjoyed our work, consider to support us with a one-time or recurring donation from as low as US$5 to keep our site going! Donate securely below via Stripe, Paypal, Apple Pay or Google Wallet.
61
SHARES
FacebookTwitter
SubscribeGoogleWhatsappPinterestDiggRedditStumbleuponVkWeiboPocketTumblrMailMeneameOdnoklassniki
Related ItemsAOAB1A4BAPBTOBCNBLUEGlobal Peace ConcertOne K in ManilaPsySHINee
← Previous Story SHINee To Kick Off ‘SHINee World V’ In The US This March
Next Story → BTS ‘2017 Wings Tour’ In The US – SOLD OUT!