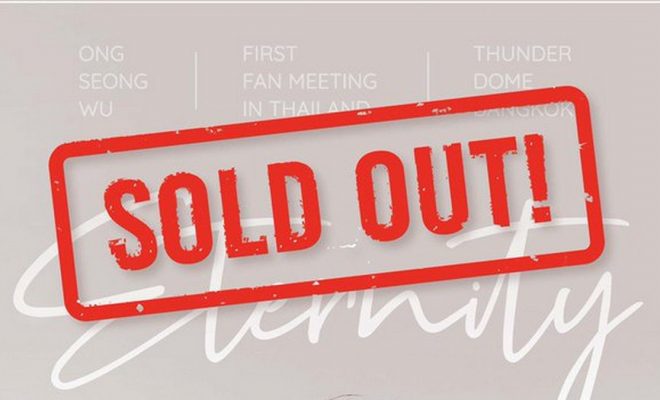 All tickets for Ong Seong Wu’s first ever fan meeting in Thailand are officially sold out!

Ong Seong Wu will be standing in front of a fully-booked arena for his fan meeting in Thailand.

The former Wanna One member will be having an even more memorable eternal time with Thai fans as his fan meeting gets marked as “sold out”!

On February 9, Hatchery, the organizer for Seong Wu’s fan meeting tour’s stop in Thailand, announced that all tickets for the show have been completely sold. About 4,600 tickets went out the moment its sale opened, and the intense ticketing war even caused the ticketing site’s server to crash at the same time.

Additionally, the hashtag #ONGSEONGWU1stFanmeetingTour also placed on the top ranking of Twitter’s worldwide trending list. All of these showed the global popularity of Ong Seong Wu, whose fans are looking forward to seeing during his fan meeting tour.

Titled Ong Seong Wu First Fan Meeting in Thailand: Eternity, the event will take place on March 16 at the Thunder Dome in Bangkok. Staying true to its title Eternity, Seong Wu will be showing the unchanging love which he and his fans have for each other as time flows.

The idol-and-now-actor will also hold fan meetings in Malaysia this March 23 and Singapore this April 6 as part of his scheduled tour.

Were you able to get tickets for Ong Seong Wu’s fan meeting in Thailand? Let us know by leaving a comment below, giving us a holler on Facebook, or tweeting us at @hellokpop!