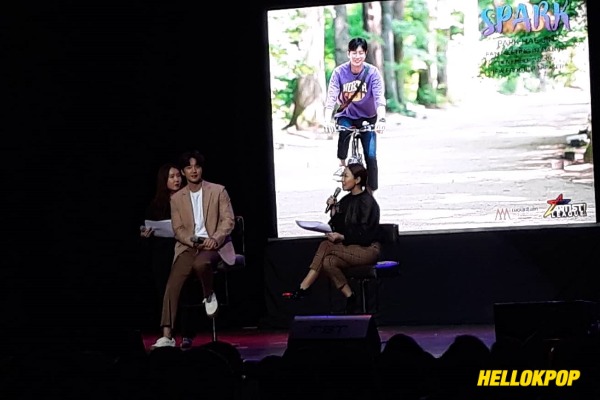 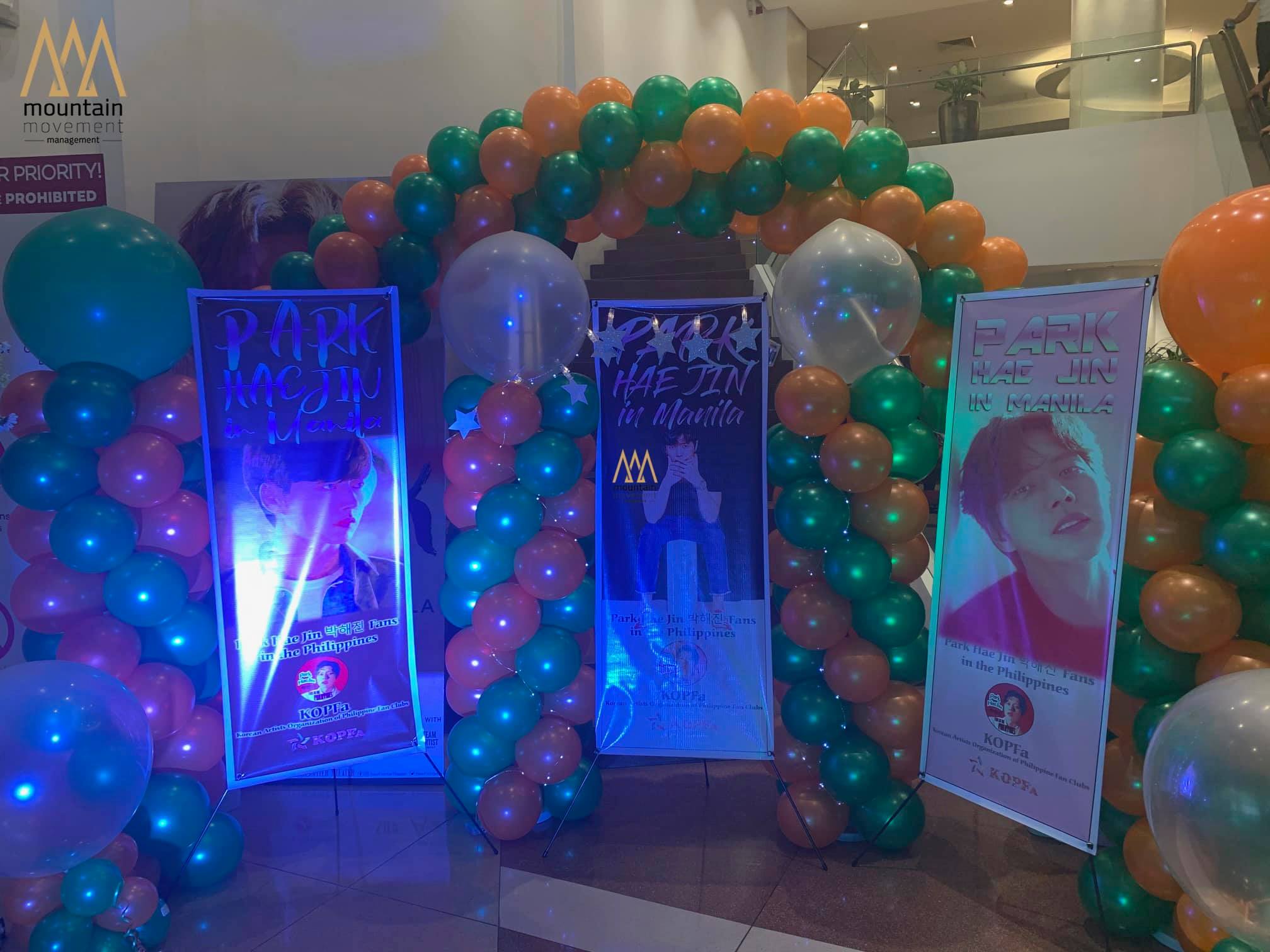 Park Hae Jin started the fan meeting with updates about his recent drama Secret. He gladly shared that they filmed some scenes in Manila. In his upcoming drama, Park plays the role of a special rescue task force member. The role is close to his heart being personally connected to South Korea’s fire department. Park Hae Jin was named an honorary firefighter for his various donations and volunteer work in support of firefighters.

Inviting Jins to watch, the fans screamed as an affirmation to Park’s request. Consequently, Park was asked what he usually do after wrapping up a drama in which he answered that he does exercise, taking care of his nephew and his dog.

Park Hae Jin shared he likes trying local food whenever he goes overseas. Hence, for the first segment of the fan meeting, the actor gamely tried some Filipino dishes. A few Filipino cuisines were served and Park would have to say masarap (delicious) if he likes it.  Pork adobo, sisig and lechon manok earned two-thumbs up from Park. In addition, he remarked that pork adobo tasted like Korea’s daeji galbi.  Sisig, according to him, needed to be partnered with rice. Much to the crowds’ delight, he was not surprised when he learned it is made from pig’s head.

Moreover, he asked if lechon manok (roasted chicken) is the same as lechon baboy roasted pig), a dish that he really liked. Not surprisingly, he seemed to enjoy lechon manok as well as he asked to take home the leg part.

We love how the actor exclaim "masarap" (delicious) everytime for the food, Sam Oh joined the audience' blatant tease of shouting their fav oppa is also yummy. 🤭 pic.twitter.com/JXXoWXyB6Y

Park Hae Jin, who has a sweet tooth, liked Filipino desserts bibingka (rice cake) and sapin-sapin (layered sticky rice cake). Park used his bare hands to taste the bibingka, saying that Filipinos enjoy eating with their hands. On his second bite, he mentioned that the rice cake tasted like something his mom used to cook at home. As for the layered sticky rice cake, he was wondering where the sweetness came from – to which the host replied that it is made with fans’ love.

Furthermore, remarking on the cute names of the foods, Park Hae Jin made his fans laugh as he said the name of each dish in an adorable manner.

For this segment, Park Hae Jin has to say a series of Tagalog phrases to lucky fans. Participants were winners of the raffle draw. Starting off with “Ang ganda mo” (You are beautiful), Park Hae Jin really made the fan’s heart flutter as well as the audience. Followed by Park’s “Date tayo ha” (Let’s date!), fans went wilder cheered louder. Making the crowd crazier, the next line “Mahal na mahal na mahal kita” (I love you so much) definitely shot to everyone’s hearts. Lastly, his “Salamat sa pagpunta” (Thank you for coming) earned an adorable reaction from the fans. 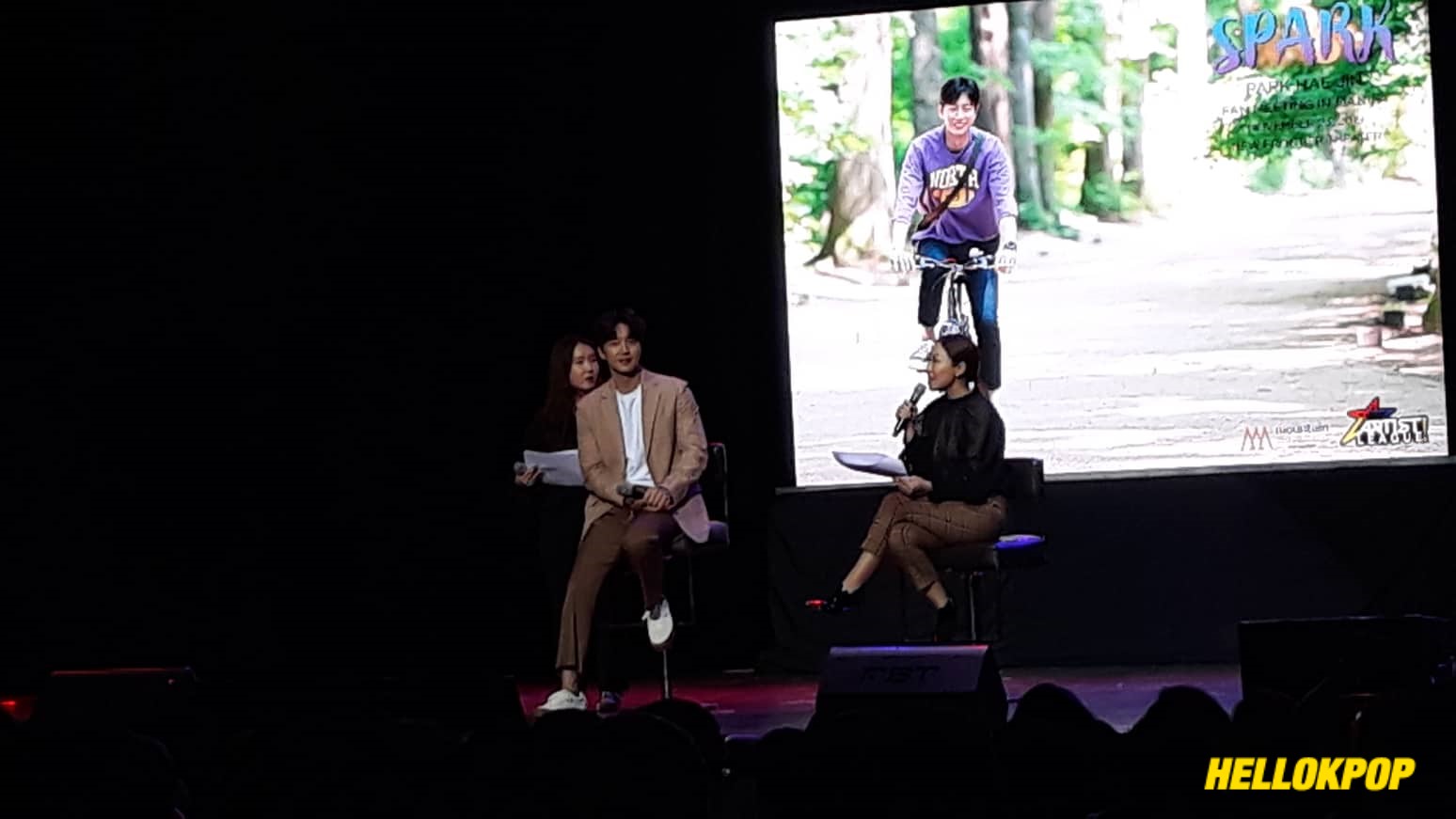 Engaging with the fans more, two lucky fans get to reenact scenes from his popular dramas. The American fan who flew all the way from Seoul was Park Hae Jin’s lucky pick. The fan made everyone drew a collective sigh with a touching message. “Thank you for who you are and what you do,” the American fan said. Meanwhile, the Filipino fan told him he is her inspiration and she will make sure to pass her thesis. The venue was filled with excitement and heart-flutters as they re-enacted scenes from his drama Man To Man and Cheese In The Trap.

Sharing that Bad Guys is one of his favorite dramas, Park Hae Jin wanted to recreate its drama poster with his fans. The actor was eager to get up close to his fans as he went down to pick the participants. He also roamed around the venue and sweetly engage with the audience. In a display of wit and humor, Park Hae Jin explained his reason for specifically selecting those joining him on stage. He said he chose one that drew him, the other one was from Turkey, another has the same wiggling expression and the last one was a substitute for friend he initially selected. 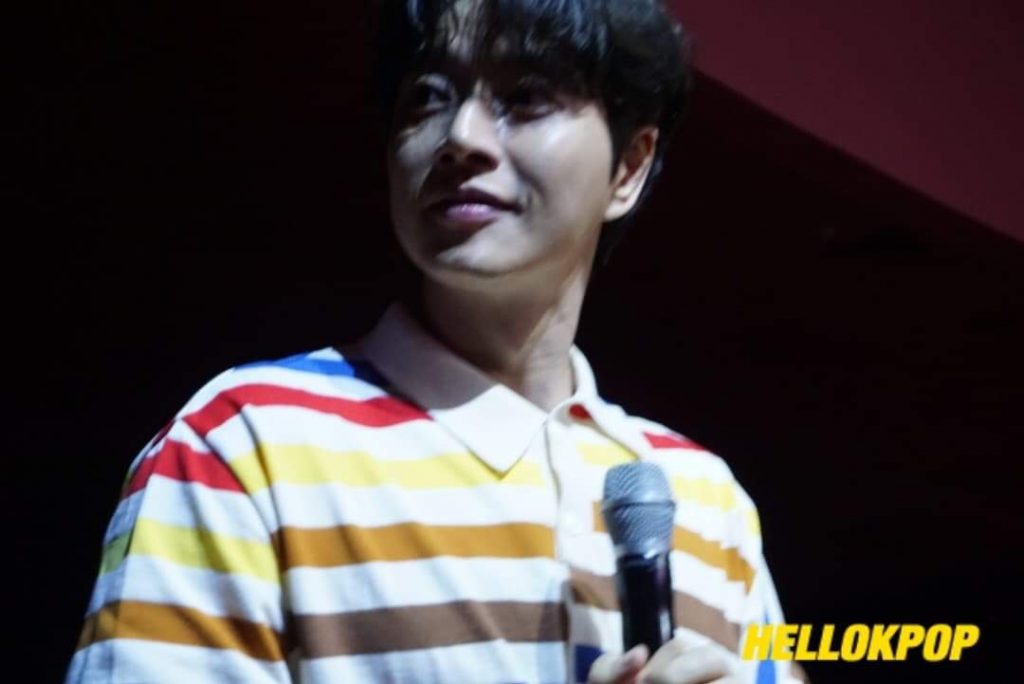 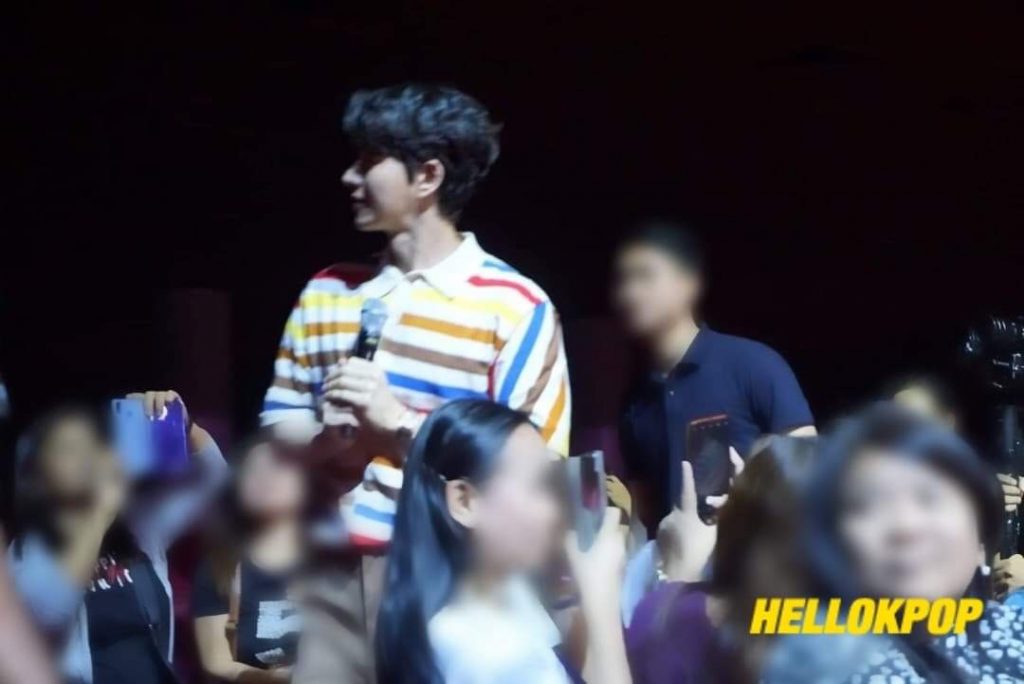 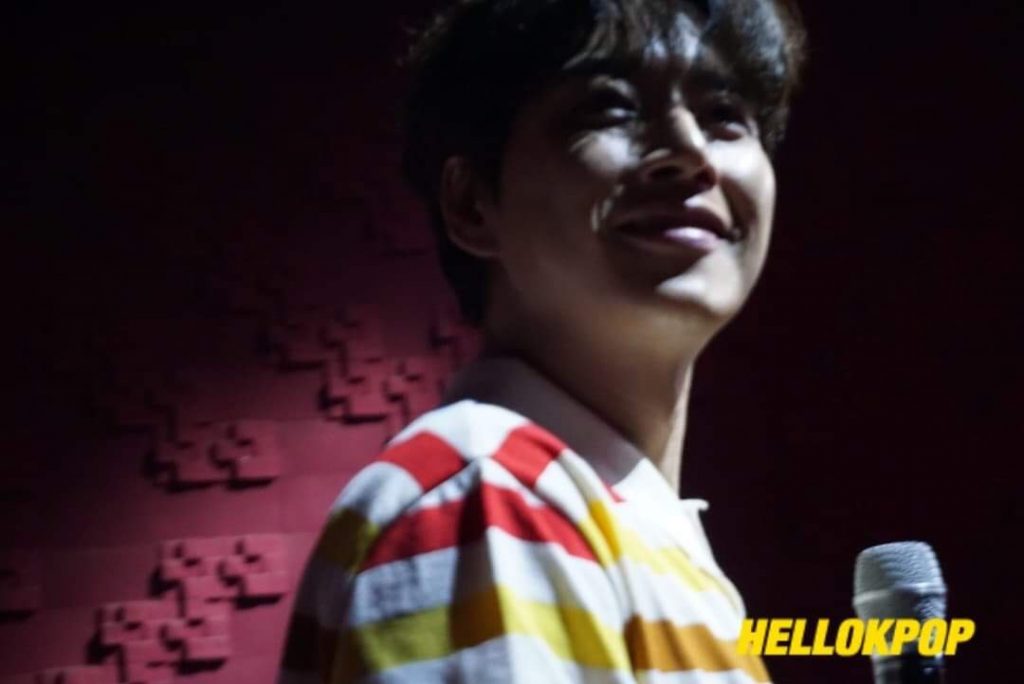 A SWEET AND POSITIVE ENDING

As the event draws to an end, the actor gave a special gift to his fans. Adorably warning the crowd that he is not a singer, Park performed Backstreet Boys’ “As Long As You Love Me”. With his heartfelt performance and genuine sincerity, Park Hae Jin truly made the evening special for fans. To reciprocate the love, fans created a video showing the charitable works they did on behalf of the actor. As a known charity worker, Park expressed his happiness upon knowing their good deeds.

Aside from his wonderful engagement with his fans, Park Hae Jin handed out gifts. He gave official photocard with his signature to the fans that gamely joined the segments. Also, fifteen lucky fans, who won the raffle draw, got a polaroid photo op with him. Apart from that, fans also get to participate in the Hi-touch and group photo events.

Park Hae Jin’s fan meeting event is surely an unforgettable night for his Filipino fans. Fans enjoyed his wit, humor and sincerity all throughout the two-hour event. He invited the fans once again to watch his upcoming drama Secret. He thanked the fans for all their support, ending the night with “Mahal kita” and “Salamat po”.

Hellokpop would like to thank Artist League Manila for the invites to Spark: Park Hae Jin Fan Meeting in Manila.

We need your support! If you have enjoyed our work, consider to support us with a one-time or recurring donation from as low as US$5 to keep our site going! Donate securely below via Stripe, Paypal, Apple Pay or Google Wallet.
256
SHARES
FacebookTwitter
SubscribeGoogleWhatsappPinterestDiggRedditStumbleuponVkWeiboPocketTumblrMailMeneameOdnoklassniki
Related ItemsPark Hae JinSpark Park Hae Jin Fan Meeting in Manila
← Previous Story Ong Seong Wu To Spend Meaningful Fan Meeting With Filipino WELOs in February
Next Story → Jang Dong Yoon Shares Plans To Hold Fan Meetings Around Asia Following “First Moment” In Seoul