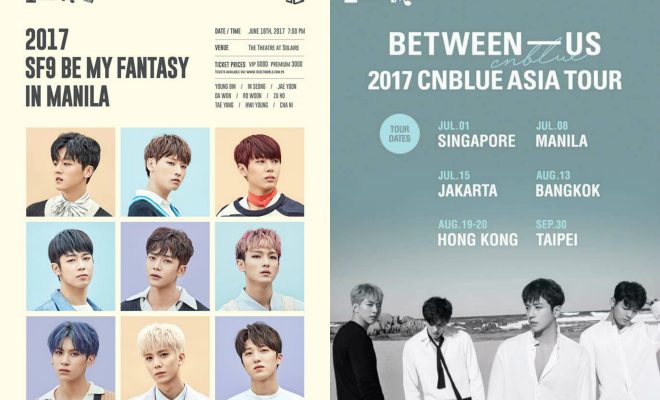 Manila may have to wait a bit more for SF9 and CNBLUE.

Korean boy group SF9 and band CNBLUE will not be performing in Manila soon as initially announced, according to concert organizer IME Philippines (PH).

The fan meeting of the Korean boy group was slated to take place on June 18 at The Theatre at Solaire. Manila was supposedly the second stop of SF9’s Asia fan meeting tour and the nine-member group’s first visit in the country.

Refunds for tickets purchased will be made available, according to the concert organizer. No further details regarding the new show date and refunds are posted as of press time.

IME PH also announced the postponement of CNBLUE’s concert in Manila on June 16, which is originally scheduled on July 8. “Due to unforeseen circumstances, we regret to announce that 2017 CNBLUE Live [Between Us] in Manila will be postponed to a later date,” wrote the concert organizer.

But it promised to update Filipino BOICEs on the new show date once details have been finalized.

2017 CNBLUE Live [Between Us] in Manila is part of the band’s fifth Asia tour, which will kick off in July. It would also have been the band’s fourth visit in the country. Last March, CNBLUE headlined the One K Global Peace Concert alongside other K-Pop acts such as B1A4, B.A.P, PSY, AOA, SHINee, and BTOB.