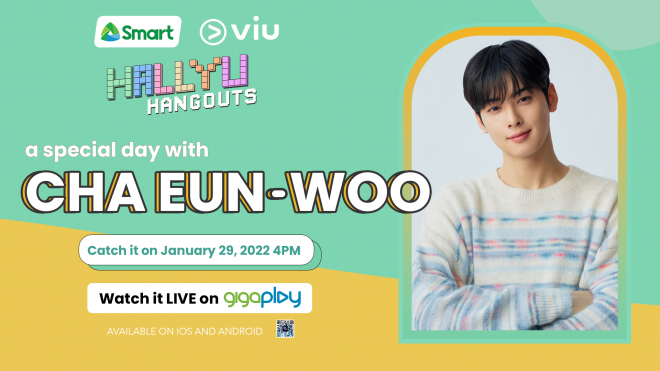 It’s not even the love month but Cha Eun Woo fans are set to feel loved and doted!

Viu and Smart are excited to present the second series of #SmartHallyuHangoutswithViu, with none other than the True Beauty star, CHA EUN WOO!

The singer-actor is the next K-Drama star who will be joining the next edition of Smart’s Hallyu Hangouts series, a virtual event that allows fans to get to know their favorite Korean idols online.

Smart Hallyu Hangouts in partnership with Viu, will allow Smart customers to spend virtual primetime with Cha Eun Woo so they can get to know the charming and
popular South Korean star even more in an intimate and fun session that will be streaming live on Jan. 29, Saturday at 4 p.m., with a replay at 8 p.m. on the same day.

The True Beauty star himself is excited to spend time with his Filipino supporters.

“Mabuhay, Philippines! I’m inviting all my Filipino fans to come and spend a day with me on Smart Hallyu Hangouts for a special day that will be streamed live on the Smart GigaPlay App. Let’s deepen our connection with each other and create special memories together this 2022. Please look forward to it.”

Dubbed as a visual genius, the smart and talented Astro member has also ventured into acting aside from his variety show stints. His notable works include True Beauty, My ID is Gangnam Beauty, All The Butlers and Handsome Tigers. You can binge-watch these shows on Viu!

How To Access Hallyu Hangouts With Cha Eun Woo

Smart Prepaid and TNT users need only to subscribe to Giga K-Video 99 and up to watch the event. The promo must be active on the day of the event to access the
GigaPlay App.

Meanwhile, Smart Postpaid subscribers with Signature plans, can directly access the event in the GigaPlay App to be able to watch Cha Eun Woo. K-Entertainment At Your Fingertips Via GigaPlay

“Korean content continues to be a major passion among many Filipinos, and in our commitment to bring our subscribers closer to what they love, we have turned Smart into the ultimate K-content destination of Pinoys. Aside from making it simpler for fans to enjoy the best Korean entertainment at their fingertips through the GigaPlay App, we also go beyond by providing exclusive Hallyu Hangout experiences that bring them closer to their Korean idols.”

“True Beauty, which was launched exclusively on Viu, continues to be popular and was received very positively by Smart subscribers–in both the original audio with English subtitles, and dubbed in Tagalog. We’re happy to work with Smart to bring Cha Eun Woo closer to his fans who love to watch his shows on Viu.”