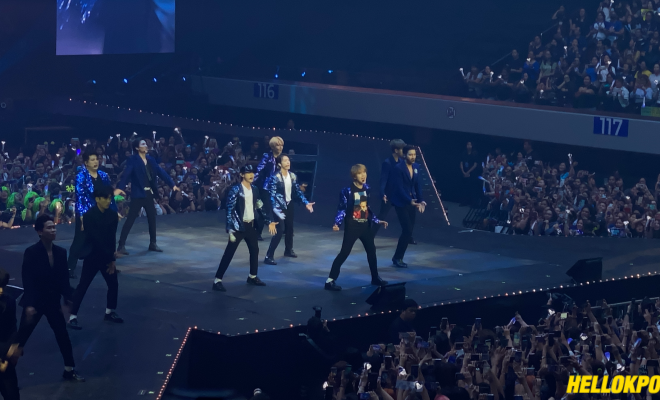 Christmas came early for Filipino ELFs as the legendary group staged the final stop of Super Show 8 in the Philippines.

Super Junior gave their all for the last show of their world tour this year. As the group serenaded the crowd with their classic and latest hits, the fans reciprocated. The venue vibrated with so much passion and energy emanating from both Super Junior and their dearest ELFs. 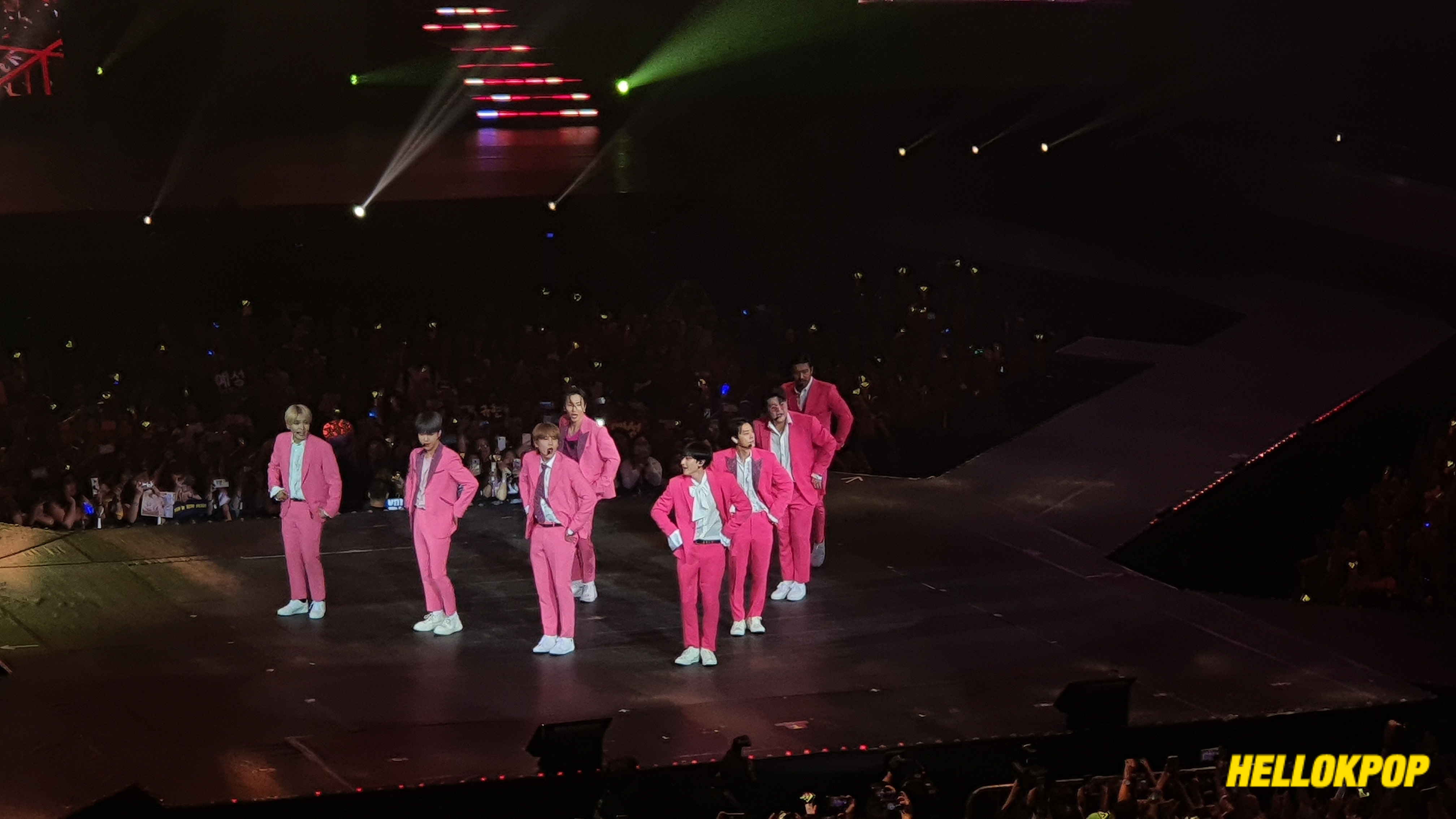 Before the event, fans got the ultimate experience of being a step closer to their favorite group through Globe K-MMUNITY PH’s exclusive booths. Fans enjoyed the different booths catered to their fangirling or fanboying needs.

Die-hard ELFs danced to Super Junior songs in the Dance Studio; practiced the fan chant and sang along to the songs through Chant Studio; took a pic with their idols/bias in the Idol Studio and tapped to songs of their favorites in Record Studio. They also posed in front of the well-lit Super Junior logo before making their way inside the venue. K-MMUNITY booth also sold exclusive Super Junior merchandise. 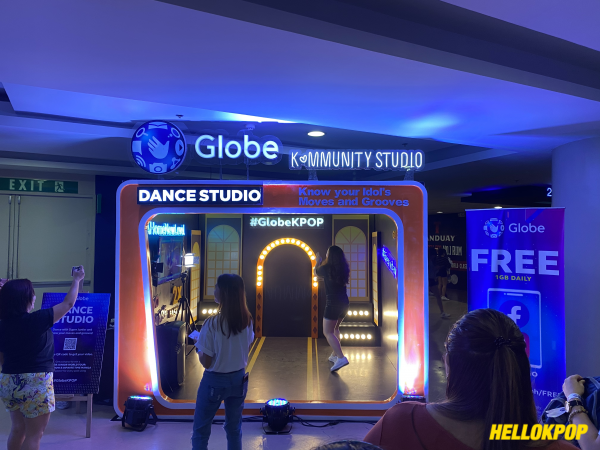 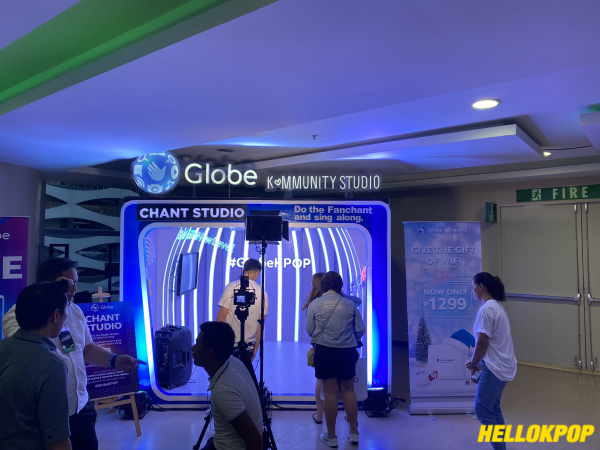 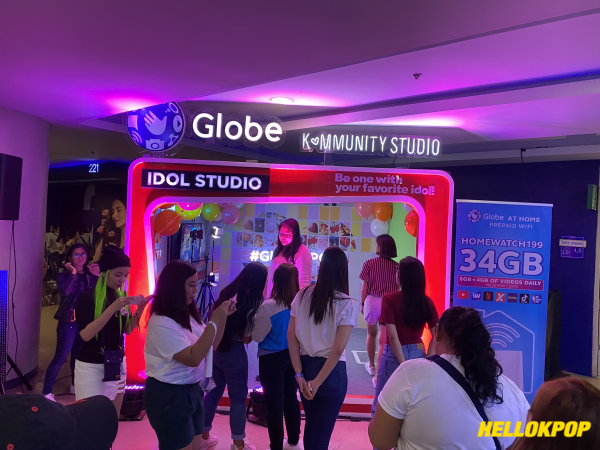 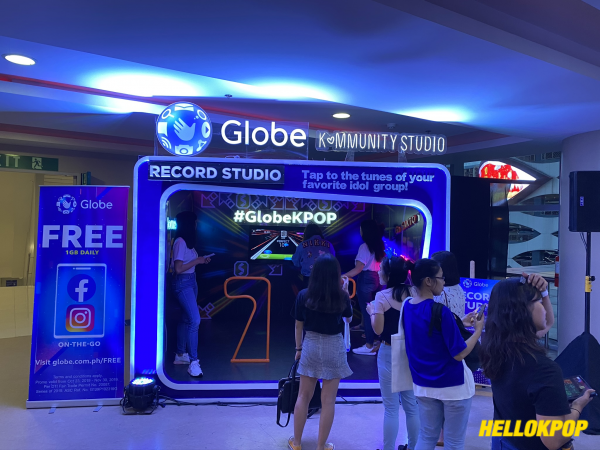 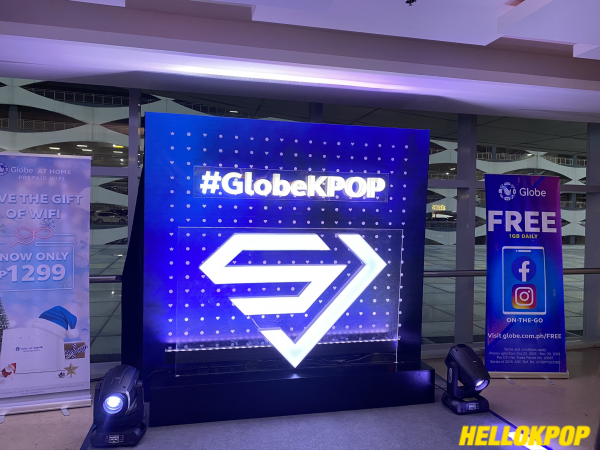 The long-awaited moment finally arrived. Filling the Mall of Asia Arena to the brim, Filipino ELFs chanted, sang along and screamed to their hearts’ content with every performance from their favorite men. PH ELFs also made a special shout out to Lee Sung Min and Kim Hee Chul. For the latter they chanted Hee Chul’s very own fan chant.

Audience Warmed Up their Voices

It really would not be a Filipino concert crowd without fans singing or screaming even before the show starts. PH ELFs made sure to fill the entire venue with their voices. Super Junior, who has performed in the country multiple times, definitely know their Filipino fans. The moment the lights dimmed and “Song for You” played, fans were prepared and so eager to sing. By the time the iconic intro of “Superman” echoed, the audience was all warmed up and ready for more.

After the fans sang together on the first two songs, Super Junior did an awesome entrance with “The Crown”. The lyrics “I’m ready for you now” aptly described the atmosphere, combined with the beautiful stage and the frenzied crowd, Super Junior officially kicked off the show. 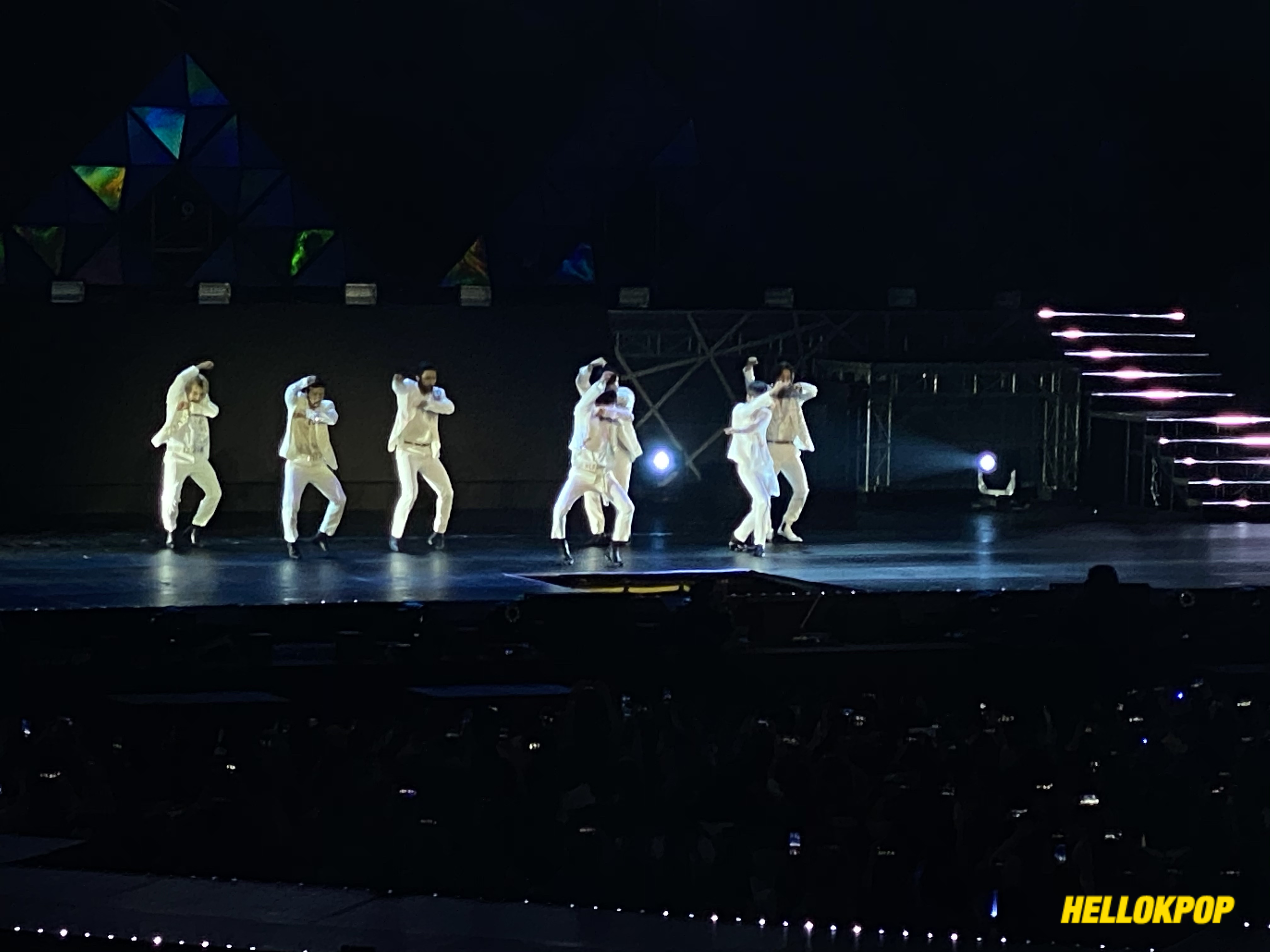 After which, they performed “A Man in Love”, “BONAMANA” and “Blue World”. Armed with their Super Bongs, fans waved their light sticks with much gusto. The changing colors and the fans synchronized waving created such a beautiful sight.

For their first ment of the night, the members greeted the audience and introduced themselves individually. Shindong did the mandatory scream challenge, and as expected PH ELFs did not disappoint. The bubbly member also added that every time they come to the country, fans always make him feel nice.

#SuperJunior now greeting the audience.
Shindong: Whenever we come here to the Philippines it’s always so nice.#SS8inMANILA pic.twitter.com/lzwS94H9GE

Ryeowook, the second member to greet the audience, said it has been a while since he stood in front of PH ELFs and that he missed them so much. Dong Hae sang and changed the lyrics of “Santa Claus is Coming to Town” to Dong Hae is coming to Philippines (he actually made it work), and the crowd joined him.

Quiet Yesung waved and also greeted the fans. The members had fun teasing Siwon who was sporting a beard. They went as far as saying he is the group’s own Santa Claus.

Meanwhile, Kyuhyun who wanted to hear the crowd’s screams urged them to do some more. He went on his knees appreciating the fans’ greetings and also said he missed ELFs so much. Members Ryeowook and Kyuhyun received the warmest welcome as fans have missed them, having been recently discharged from the military. 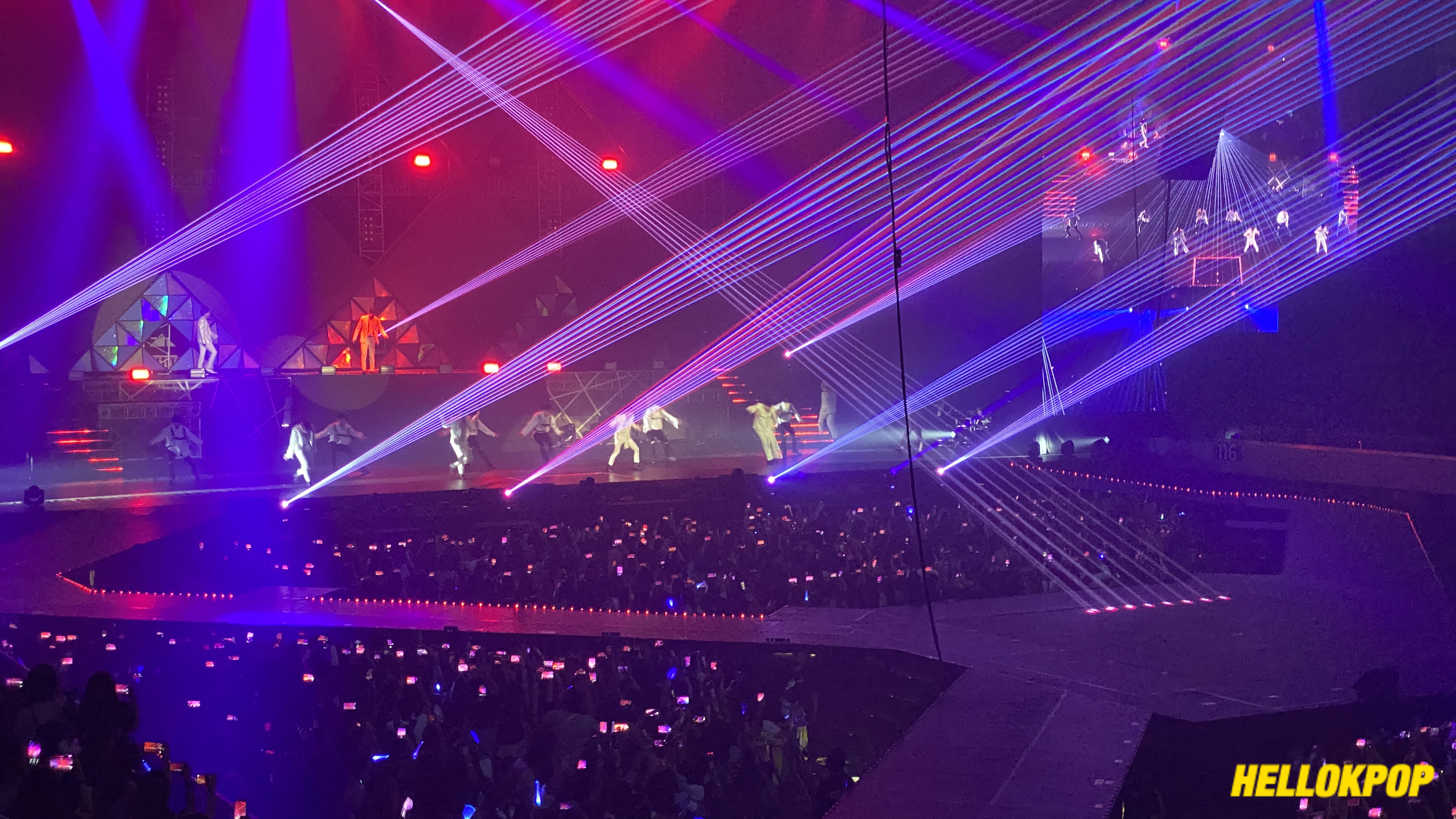 Hyuk Jae, who seemed to be into the Frozen 2 movie, sang the hook of its OST “Into the Unknown”. He even asked the crowd if they have watched it already. Leader Lee Teuk with a huge smile greeted the crowd as well.

A string of great performances

Super Junior and the audience took a breather with a short VCR before going on into their second set. After the VCR viewing, the members went back on stage and performed a combination of songs from their latest album Time­_Slip and past hits such as “Heads Up”, “I Think I”, “Sexy, Free & Single” and “Mr. Simple”. 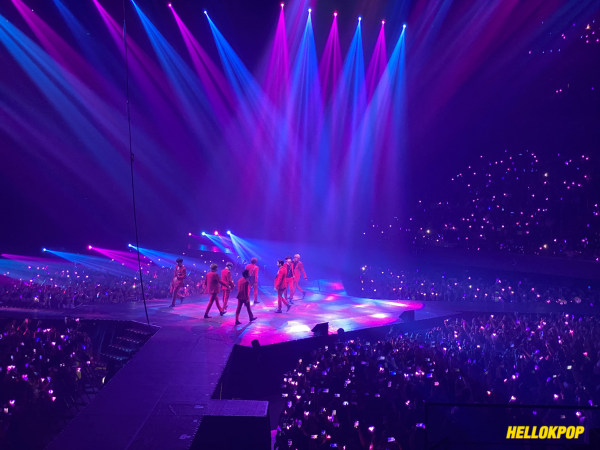 Another VCR showed Super Junior giving their definition of love, giving time for the members to prep for the next batch of performances. Back on stage, they gifted fans with songs “Opera”, “Love Disease”, “She’s Gone”, “My All Is In You”, “Believe”, “Somebody New” and “No Other”. The members acknowledged the presence of Shindong’s mom who was in the audience and said that for them “love is ELFs”.

READ: Super Junior Songs That Made Them The K-Pop Icons They Are Today

The group then introduced the audience to old school rapper Super Junior through a fun and witty video. Then they came out and performed “Rokkugo” and “Hairspray”. Sub-unit K.R.Y. (Kyuhyun, Ryeowook and Yesung” showcased their dancing skills as well. Shindong and D&E gave an endearing and funny performance of “ELF Song”. 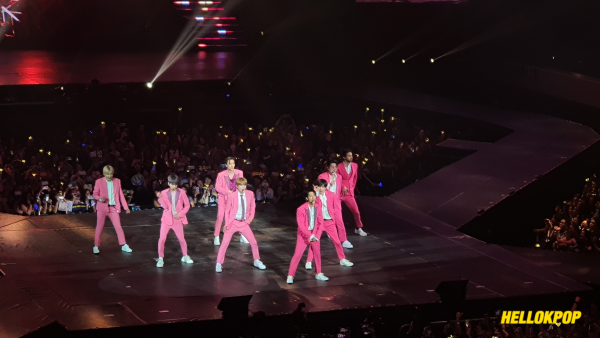 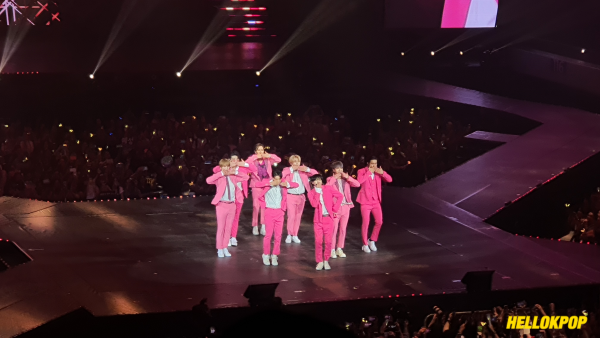 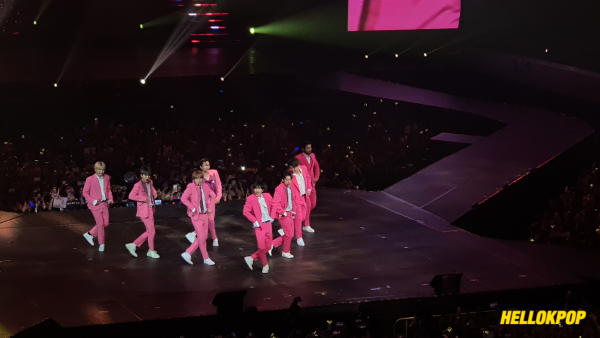 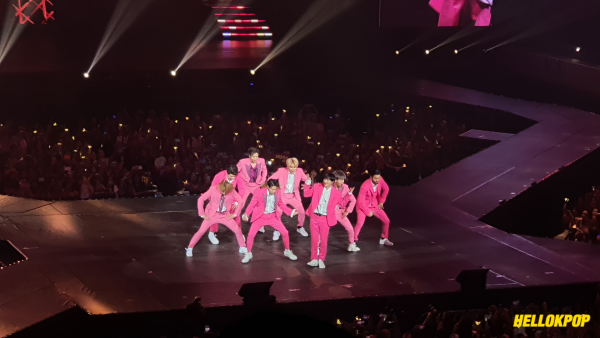 Super Junior once again performed as a group with “Devil”, “Shirt”, and “Super Clap”. A short gap followed while “Stay With Me” played. The group were back again on stage for their final set. They delighted the audience with performances of “MAMACITA”, “Black Suit”, “Sorry Sorry – Answer” and “Sorry Sorry”.

While waiting, fans viewed another video with simple instructions to clap as many times as told. Super Junior performed “Show” and “Too Many Beautiful Girls” for their encore stage. After the performance, the members thanked the fans for spending the night with them and hoped that they enjoyed it. Lee Teuk said that he saw the buildings are getting taller every time they visit the country. He hoped that the love of PH ELFs also grows stronger with the passage of time. 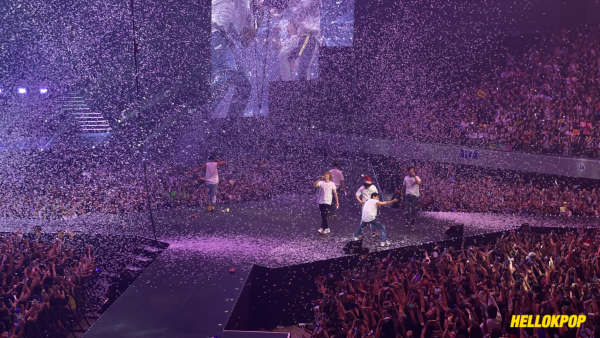 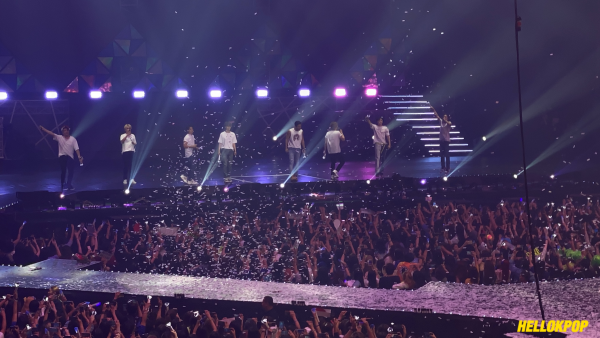 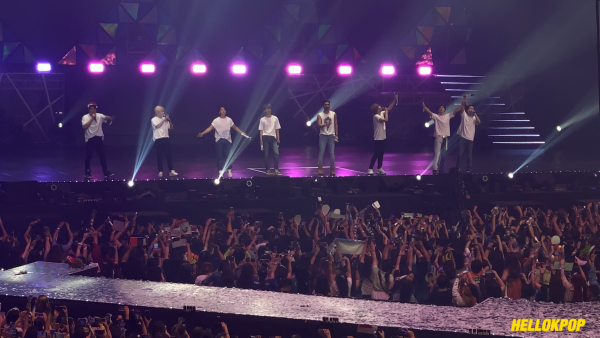 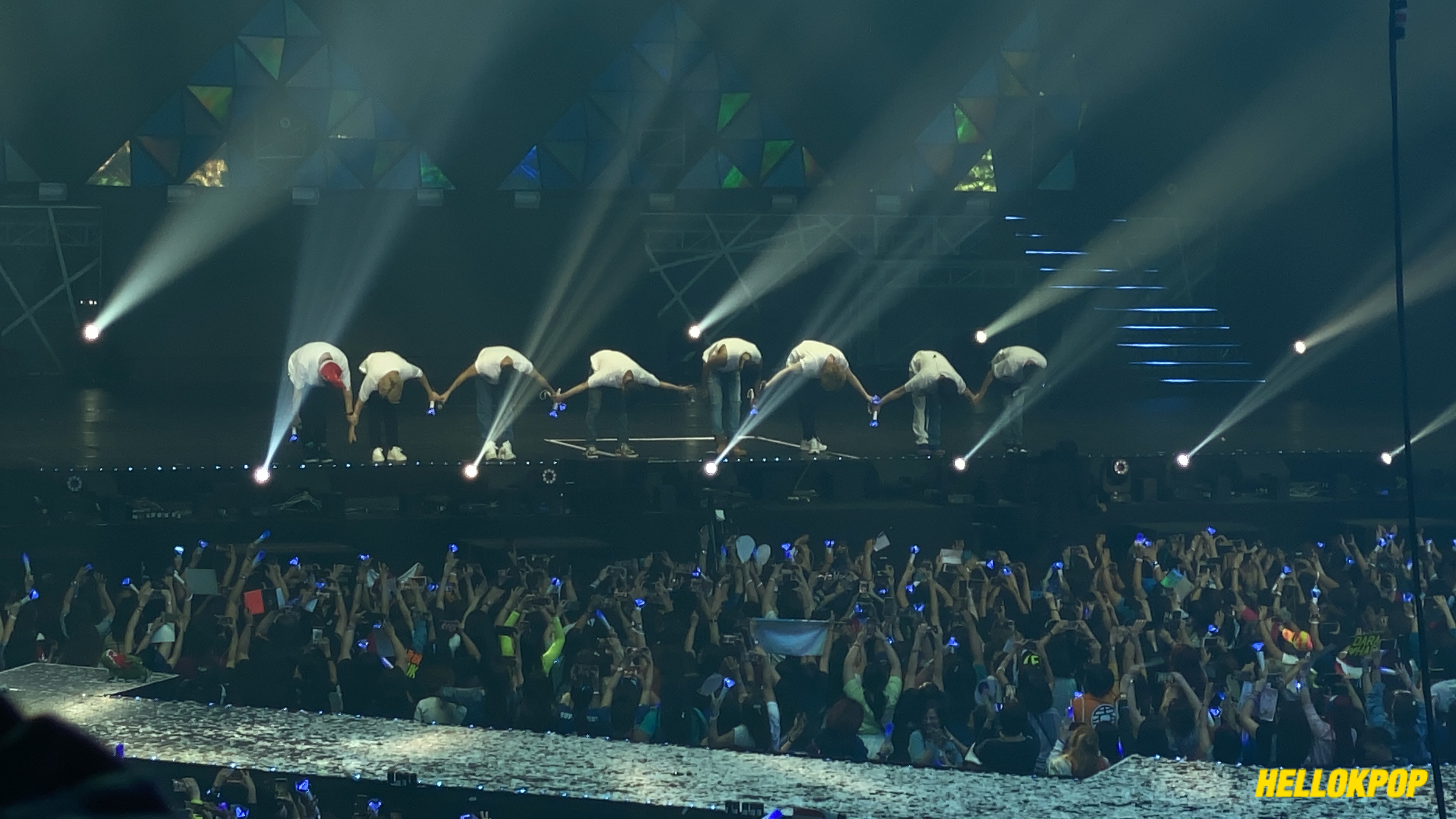 He then announced that they are preparing for a new album and that they will see PH ELFs once again for Super Show 9 much to the crowd’s delight. The playful leader teased the crowd by asking if they should make it a two-day show to which the fans eagerly said yes to.

It was indeed a night of old and new memories for Super Junior and Filipino ELFs. They have already shared and endured moments together for the past fifteen years and it is not going to stop anytime soon. 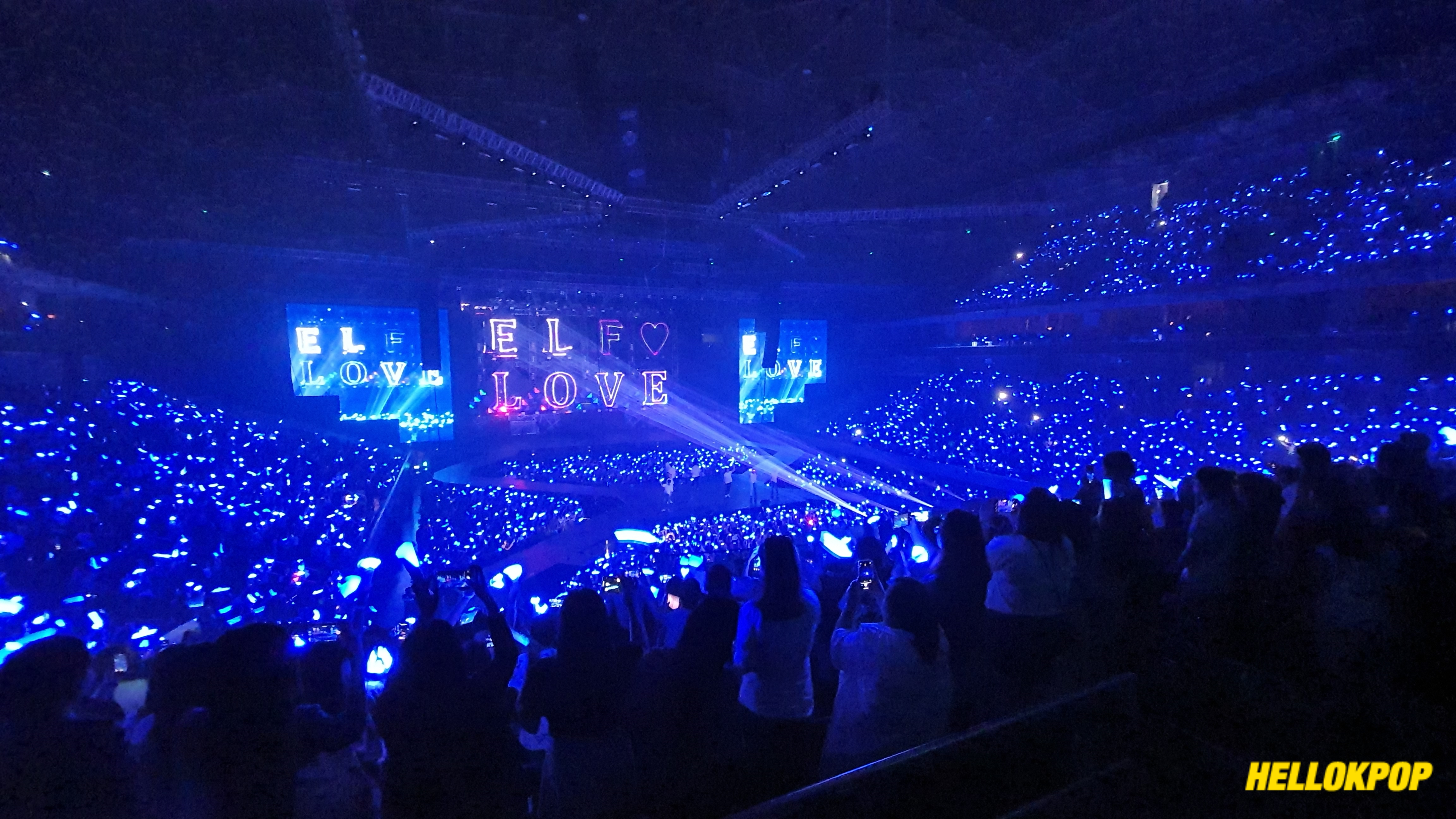 Hellokpop would like to thank PULP Live World and Globe K-MMUNITY PH for the invites. 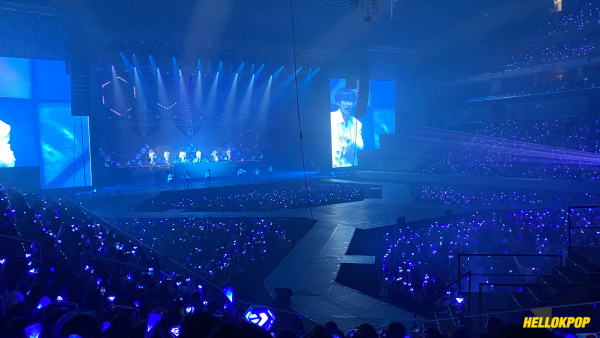 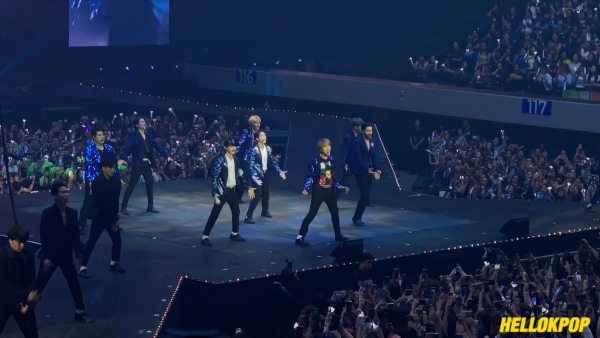 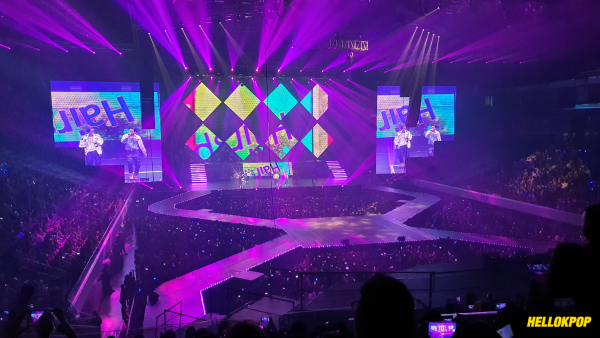 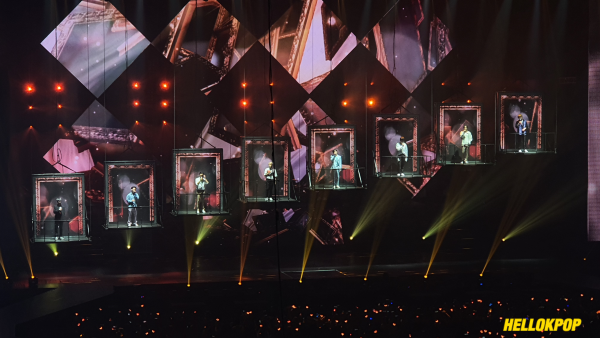 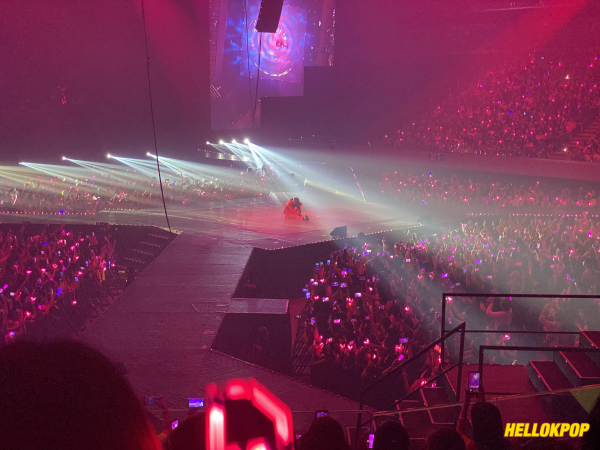 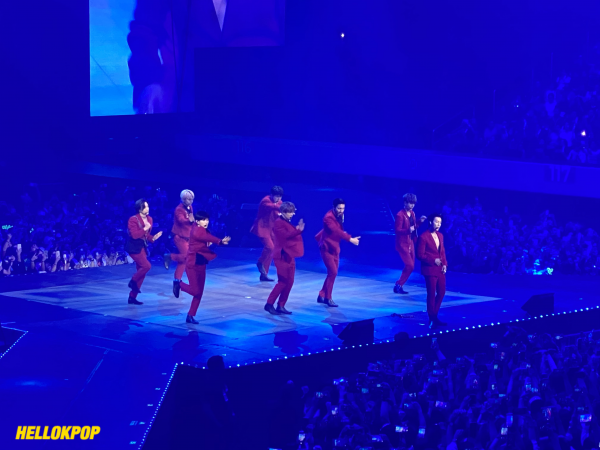 Super Show 8 Infinite Time in Manila is brought to fans by PULP Live World, GLOBE PH and SM Entertainment. Hellokpop extends gratitude to PULP Live World for the invite to the event.