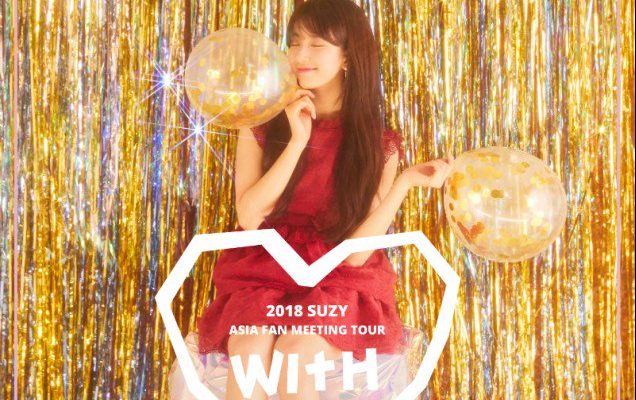 Suzy gave her fans a big “Holiday” treat as she wraps up her fan meeting tour with a finale stage in Seoul.

Suzy concluded the activities for her 2018 SUZY Asia Fan Meeting Tour WITH on July 7 in Seoul. Starting off her tour in Taipei and moving on stops in Hong Kong and Bangkok, the finale stage, prepared for her Korean fans, was met with a thunderous crowd.

She performed her song “In Love with Someone Else” along with tracks “Holiday” and “Sober” from her second album Faces of Love.

Aside from performing covers, the fans were also treated with a question and answer time, particularly talking about her latest drama While You Were Sleeping. Gifting her fans with games and wishes, the people inside the arena cheered for the singer’s every move. She said that she was glad to be able to finish her fan meeting tour with Korean fans.

At the end of the event, she relayed how grateful she was celebrating the 8th anniversary of her debut with the people who have been with her for years.

She also said that she wants to make better memories with them in the future. After other activities like the hi-touch and group photo, the fans found it hard to say goodbye to the pop star.

Completing her fan meeting tour, Suzy is going to concentrate on her upcoming SBS drama, Vagabond. Reuniting with Lee Seung Gi whom she worked with before in Gu Family Book, she’ll be giving life to Go Hae Ri, a National Intelligence Service black operations agent working undercover for the agency.

Although dreaming of becoming a white agent, working on complex missions as a black agent provides more for her family.

She would be working with Lee Seung Gi’s character, Cha Gun, a stuntman who dreams of becoming a world famous action star as they uncover the mysteries of a plane crash that changed Cha Gun’s life. They would be involved with a conspiracy behind the accident and will be in the middle of a national corruption case later on.

Suzy’s last drama While You Were Sleeping recieved international fame and nationwide acclaim so a lot is expected from her in this new role.

Celltrion Entertainment, the production company handling the filming of Vagabond, aims to create a next-generation drama with the right mix of energy, action and thrill to tap into the hearts of the viewers through detailed acting, directing and scripwriting.

Sony Pictures will oversee the distribution of the drama overseas and is looking to have a simultaneous worldwide broadcast in Korea, United States and Japan on AXN and Sony One.

Hellokpop, as an independent Korean entertainment news website (without influence from any agency or corporation), we need your support! If you have enjoyed our work, consider to support us with a one-time or recurring donation from as low as US$5 to keep our site going! Donate securely below via Stripe, Paypal, Apple Pay or Google Wallet.
FacebookTwitter
SubscribeGoogleWhatsappPinterestDiggRedditStumbleuponVkWeiboPocketTumblrMailMeneameOdnoklassniki
Related ItemsLee Seung GiSuzyVagabondWITH Asia Fan Meeting Tour
← Previous Story UNB Proves Popularity In Japan With Successful Concerts In Tokyo And Osaka
Next Story → Yoona Concludes Bangkok Fan Meeting, Prepares for New Movie